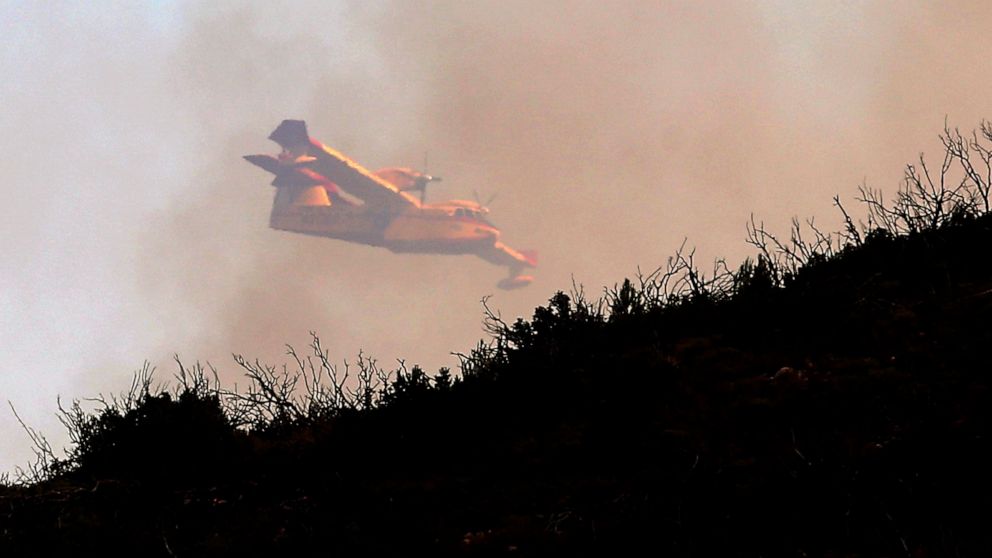 MADRID — A wildfire burning out of control in the eastern province of Valencia has become one of the biggest this year in Spain, having already scorched more than 19,000 hectares (47,000 acres) along a 120 kilometer (75-mile) perimeter, authorities said Friday.

Some 35 aircraft have been deployed as the blaze entered its fifth day. Rain boosted hopes the fire could be brought under control on Thursday, but strong winds have made it very aggressive, the Valencian regional government’s justice chief said.

Five people remain in hospital after suffering severe burns Wednesday when several passengers tried to jump off a train that stopped and tried to go back amid surrounding flames. The train had inadvertently headed into the fast-spreading wildfire.

Regional government head Ximo Puig has requested a report from firefighting services to clarify why the train was allowed to proceed through the burning area.

This year, wildfires in Spain have burned four times more than they did during the last decade.

Up to early August, 43 large wildfires those affecting at least 500 hectares (1,235 acres) were recorded in the Mediterranean country by the Ministry for Ecological transition, while the average in previous years was 11.

The European Forest Fire Information System estimates a burned surface of 284,764 hectares (704,000 acres) in Spain this year. That’s four times higher than the average since records began in 2006.

Russia’s standing in G-20 not threatened by Ukraine invasion

PMQs: Johnson and Davey on visas for Ukrainian refugees...

The Low Threshold for Face Recognition in New Delhi

This Bloody Mary with potato chip breadcrumbs is the...

Russian and Belarusian drivers can compete in neutral capacity,...

What K Street is watching for from Biden tonight

‘F*** These Fascists,’ Chanted by Students in Visit From...

5 takeaways from Biden’s first presidential trip to the...

Husband’s love for his wife lives on in field...

Xiaomi 12T imminent, according to tipster; should the pricier...

Smartphones Are a Lifeline for Ukrainian Refugees

The budget OnePlus Nord Watch is expected to launch...

Russia Presses on With Invasion Toward Kyiv

Mysterious Seafloor Holes Baffling Scientists to Be Probed for...

Queen Elizabeth II ruled through decades of change on...

Months after pledge, India yet to submit emissions targets

After Texas shooting, schools around US boost security

Covid's Effects on the Brain Can Be Noxious