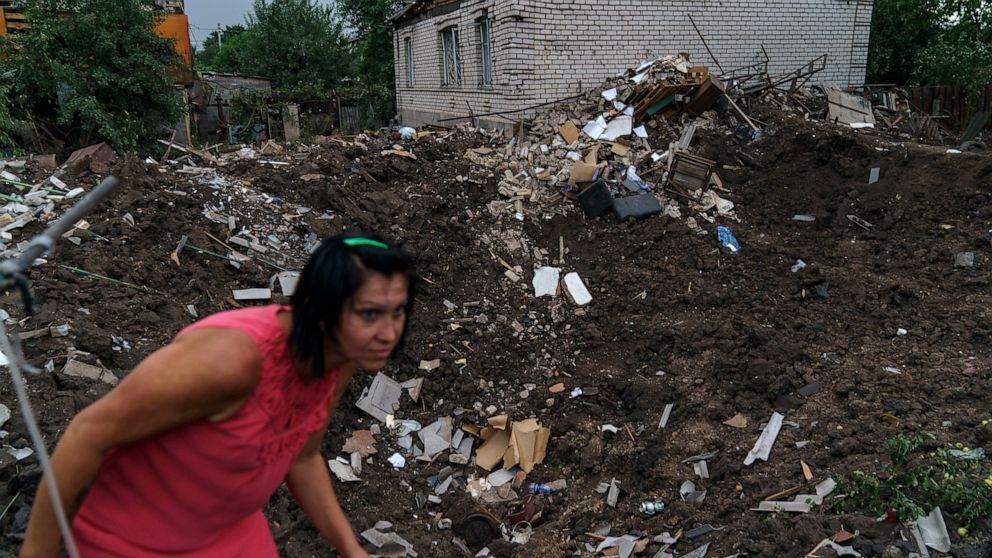 KYIV, Ukraine — The residents of two villages in Russias Belgorod region on Ukraines northeastern border were evacuated after a fire at a munitions depot near the village of Timonovo, the region’s governor said Friday.

There were no casualties in the late Thursday blaze, Gov. Vyacheslav Gladkov said.

The fire came days after another ammunition depot exploded on Ukraine’s Black Sea peninsula of Crimea, a Russian-occupied territory seized by Moscow in 2014.

Last week, nine Russian warplanes were reported destroyed at an airbase on Crimea, demonstrating both the Russians vulnerability and the Ukrainians capacity to strike deep behind enemy lines. Ukrainian authorities have stopped short of publicly claiming responsibility.

But President Volodymyr Zelenskyy alluded to Ukrainian attacks behind enemy lines after the blasts in Crimea, which Russia has blamed on sabotage.

Meanwhile, Kyiv and Moscow continued to accuse each other of shelling Europes largest nuclear power plant, stoking international fears of a catastrophe on the continent.

On Friday, Nikolai Patrushev, the secretary of Russias Security Council, accused the United States of encouraging Ukrainian attacks on the Zaporizhzhia nuclear power plant in southern Ukraine. The facility has been controlled by Russian forces since shortly after the invasion began on Feb. 24.

In case of a technological disaster, its consequences will be felt in every corner of the world, Patrushev said. Washington, London and their accomplices will bear full responsibility for that.

Ukraine has accused Russia of storing troops and weapons at the Zaporizhzhia plant and using its grounds to launch strikes against Ukrainian-controlled territory. Ukrainian officials and military analysts say Moscows forces have cynically employed the plant as a shield, knowing that the Ukrainians would be hesitant to fire back.

Russia has denied the accusations and, in turn, accused Ukrainian forces of repeatedly shelling the plant.

Following a visit to Ukraine on Thursday, Turkish President Recep Tayyip Erdogan said that Zelenskyy had asked him to ensure that Russia remove weapons stored at the plant as an important step for world peace.

Zelenskyy asked this of us especially: that Russia remove all mines and similar (weapons) there and for the issue to rapidly cease to be frightening. Because it is a threat, Erdogan said.

Erdogan, whose country has maintained close relations with both Ukraine and Russia, said he would discuss the issue with Russian President Vladimir Putin, saying that Russia must do its part in this regard.

The Turkish president made the comments to a group of Turkish journalists on his return from a visit with Zelenskyy and U.N. Secretary-General António Guterres in Ukraine late on Thursday. His comments were reported by Turkey’s state-run Anadolu Agency and other media on Friday.

At the meeting in the western city of Lviv, far from the front lines, the leaders discussed expanding exchanges of prisoners of war and arranging for U.N. atomic energy experts to visit and help secure the nuclear power plant.

At least five people were killed and 10 others were wounded by the Russian shelling of towns and villages in Ukraine’s eastern Donetsk region, according to regional authorities. The shelling damaged residential buildings and civilian infrastructure in the embattled region where Russian forces are pushing to overtake areas still held by Ukraine.

At least one civilian died early Friday in Russian shelling of the city of Kharkiv, to the northwest of the Donetsk region, while Russian missiles in the southern port city of Mykolaiv again struck port facilities and a university building that was previously hit by shelling earlier this week. One person was wounded in the attacks, authorities said. Warnings snow and winds could disrupt travel in Scotland

From tornadoes to ice, here are the conditions expected...

Scholz: Germany well-placed on energy to get through winter

If prices keep rising, a nightmare scenario for the...

Katie Pavlich: There is no room in the Democratic...

Russia may start providing trade finance to importers of...

CDC strategy on masks could haunt the country

A Muslim teenager was killed at a protest in...

How destructive AR-15 style rifles can be

Bookstagram Is Fueling an Unnerving Trend

Africa finally has enough Covid shots. Is it too...

This week: House set to vote on marijuana legalization...

Jon Voight calls for Biden to be impeached

Covid: Fines issued over No 10 event and EasyJet...

Vilsack looks to equity commission for ‘outside look’ on...

‘Dental deserts’ with no NHS provision on the rise...

NASA Mars Perseverance rover celebrates one year on the...

Oscar Piastri will replace Fernando Alonso at Alpine next...

U.K. Retailers are Cleaning Up their Supply Chains (Audio)