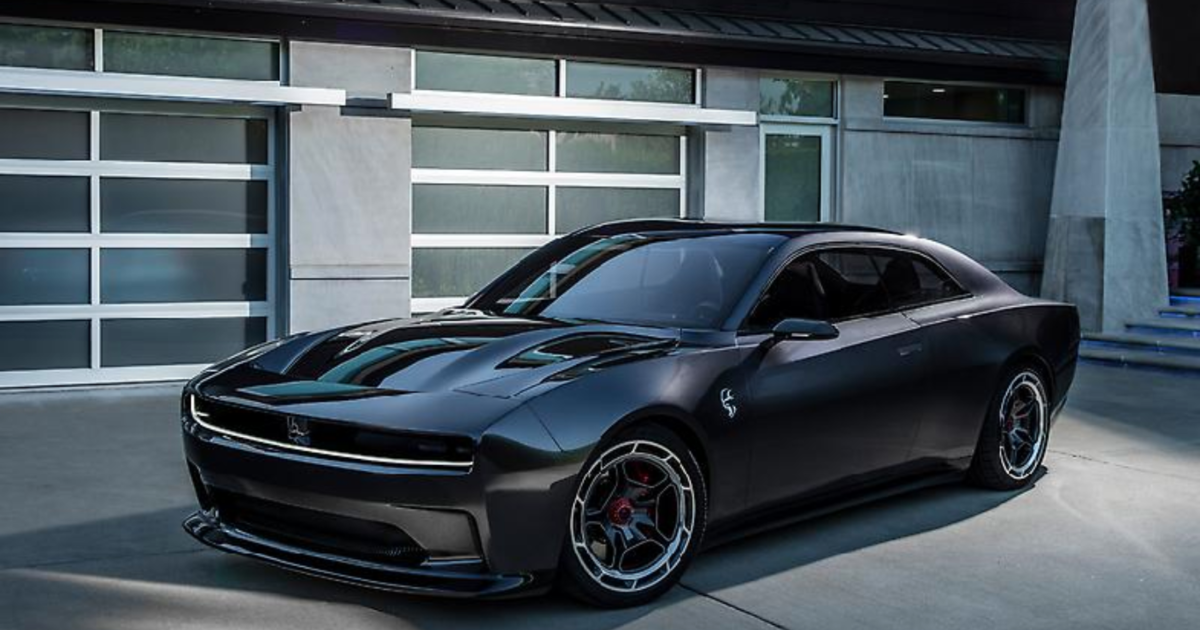 Thundering gas-powered muscle cars have been a fixture in American culture for decades, but as automakers hit the brakes on carbon emissions, they will be replacing those combustion-engine vehicles with super-fast models that run on rechargeable batteries.

Stellantis’ Dodge brand has unveiled the Charger Daytona SRT — a fully electric muscle concept car, a preview of what will be produced in 2024.

Featuring a Fratzonic Chambered Exhaust that replicates the roar of V8 engine, the new concept EV aims to excite fans of the Hellcat and other previous Charger models. A concept car is an auto manufacturer’s polished rough draft of a new car that could be for sale soon.

The Canadian factory that makes the gas-engine Charger will be converted to produce electric vehicles. Dodge is also partnering with Samsung to build a $2.5 billion electric vehicle battery plant in Kokomo, Indiana.

One reason for the industry shift to batteries is that electric vehicles are simply faster off the starting line. Their handling is typically better, too, because the heavy batteries create a low center of gravity. Stricter government pollution requirements are another factor.

Tim Kuniskis, CEO of the Dodge brand, said the possibility of government fines for not meeting gas-mileage requirements hastened the company’s shift to the all-electric Charger.

“Compliance fines and things like that associated with a big cast-iron supercharged V8, yes, it’s tough,” he said.

Of all major automakers, the EPA has labeled Stellantis with the lowest average fuel economy — 21.3 miles per gallon — and the highest average carbon dioxide emissions.

Muscle cars like the Charger and Challenger represent a unique style of high-performance vehicles popularized by U.S. automakers in the 1950s and marketed for their powerful engines and sporty design. Muscle cars are typically two-door vehicles with lightweight bodies designed to help the car go fast.

Americans’ interest in muscle cars surged in the 1960s with the popularity of drag racing and as more customers purchased cars like the Pontiac GTO, Ford Mustang and Plymouth Road Runner. To many gearheads, the thought of a muscle car without combustion-engine noise and gas smells is heresy.

“Guys like me are just going to frown on it and laugh at it,” said Rick Nelson, owner of Musclecar Restoration & Design in Illinois. “But this isn’t about my generation.”

Electric vehicles, Kuniskis said, have the potential to perform better than gas muscle cars with faster acceleration. But he said they are kind of sterile.

Kuniskis wouldn’t say how quickly the electric Charger will go from zero to 60 mph, but said it would be faster than the company’s current petroleum performance cars. He also wouldn’t say the range-per-charge for the new Challenger, but added that range isn’t as important as making it a true muscle car.

Kuniskis said the shift to electricity doesn’t mean the end of the muscle car. It’s just a new era. Porsche says 80 percent of its cars will be...

Meta is in trouble

Musk Publicly Punishes Twitter Engineers Who Call Him Out...

Father-Son Bonding Exercise Turns Tragic as One Falls Off...

Here’s your July Fourth weekend weather forecast across the...

Indian electronics and lifestyle startup Boat files for an...

Find prospective buyers to save weak Chinese developers in...

The Hill’s 12:30 Report: Congress nears yet another funding...

PMQs: Johnson and Blackford on prime minister’s future in...

Title, top four and relegation to be decided –...

It is only April, and New Mexico has already...

Liz Truss or Rishi Sunak to be announced as...

BlackBerry phones once ruled the world, then the world...

Your Evening Briefing: Kyiv Under Siege as Russia Attacks...

Uganda: Women in Lira are not allowed to sit...

Number of adults who identify as LGBT has doubled...

Why is Russia calling ‘votes’ in occupied Ukraine?

McDonald’s puts up price of cheeseburger for first time...

Free Chinese VPN exposed millions of users' data
Monkeypox breakthrough infections are real. ‘This vaccine will not be a silver...