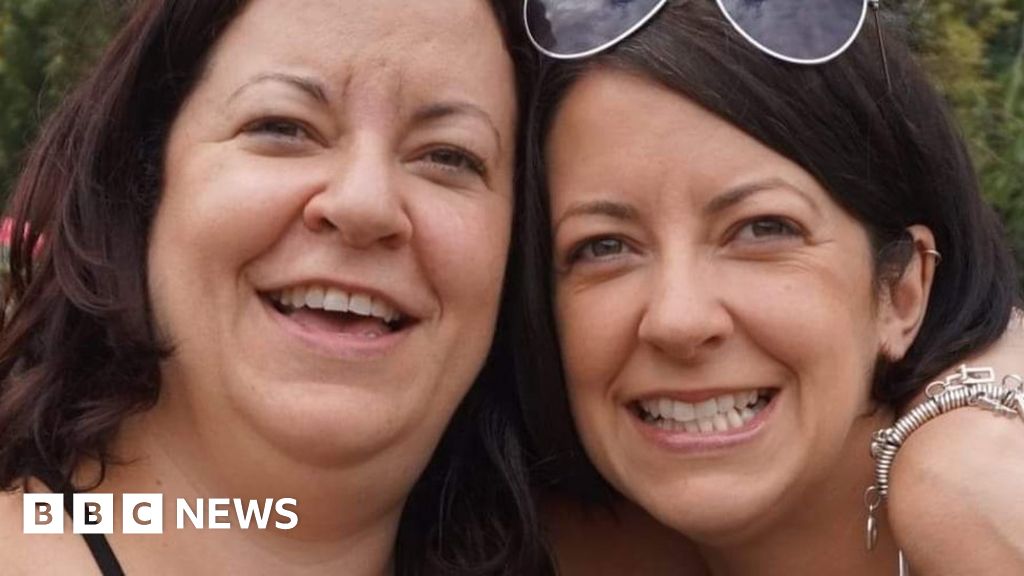 The twin sister of a woman shot dead along with her two daughters by the girls’ father says stricter gun checks could have prevented their deaths.

Kelly Fitzgibbons, 40, and Ava and Lexi Needham, aged four and two, were killed by Robert Needham, 42, at their home in Woodmancote on 29 March 2020.

Ms Fitzgibbons’ sister Emma Ambler told the BBC she was “shocked” at how easy it was to get a gun licence.

A new foundation will press for extra controls and help victims’ families.

In her first broadcast interview, Ms Ambler said the foundation would be a fitting tribute to her “wonderful, special” sister and her “gentle, gorgeous little girls”.

In January 2020, Ms Ambler celebrated her 40th birthday with her twin sister.

“Drinking prosecco, dancing and laughing. She had such a contagious laugh,” Ms Ambler said.

“She had so many friends. She absolutely doted on those two girls.”

But in March, during the first weekend of coronavirus lockdown, Needham shot her dead at their home along with their two daughters, before turning the gun on himself.

Image caption, Rob Needham was a builder who had been with Ms Fitzgibbons for 14 years

In a delayed inquest in July, the coroner ruled Kelly, Ava and Lexi had been unlawfully killed, and that Needham had died by suicide.

Though he legally owned the gun, evidence emerged at the inquest that he had lied when applying for the licence.

The family now say applicants who lie should be banned from re-applying.

“If Rob hadn’t had access to such a deadly weapon, there’s a chance that Kelly, Ava and Lexi could still be here,” Ms Ambler told the BBC.

“This could have been prevented if gun licensing guidance was tougher.”

The family also want licences to be reviewed more frequently, for closer working to be forged between GPs and police, and for people with recurring depression to be barred from getting a licence.

A Home Office spokesperson told the BBC they were “committed to giving police the tools they need to protect the public,” such as new licensing guidance last year.

“Last month we launched a new digital marker for doctors to use that will flag to police if the license holder develops a new relevant medical condition.

“We will continue to review and strengthen these measures as needed.”

Sussex Police said it had “significantly changed and improved” its licensing processes since 2020, and that the force’s thoughts remained with the families involved.

Meanwhile, Ms Ambler wants to help others cope with the bewildering experience of losing someone to violence.

“You have police investigations and coroners’ inquests. You’re not really equipped to know how to deal with these things and nobody really talks you through what’s involved.

“The emotional impact that has on your family is huge.”

Her family has now set up the Kelly Fitzgibbons Foundation, which offers advice, support and grants towards funeral costs and counselling.

“To know that we’ve prevented this happening to one other family would help me to feel that Kelly’s left a legacy. And I know that’s what she’d want me to do.”

If you are affected by this story, you can find help and support from BBC Action Line.

Lord Grade: Ofcom’s job is not to regulate culture...

Howard Lindzon on What’s Really Going on in the...

Gas Taxes Are Higher in Blue States Than Red—Here’s...

Ukrainian maternity ward: The last specialist ward in the...

Nearly half of employees admit to risky online behavior...

This Android phone tries to follow the Samsung Galaxy...

Chevron to Send First Venezuelan Crude Shipment to US...

Mega Millions jackpot now over $1 billion after no...

The Great Avocado Shortage: War, climate change, and a...

Ukraine winning in the North but war isn’t won...

War in Ukraine: Crisis is unleashing ‘hell on earth’...

US weighing decision to shoot down Chinese spy balloon...

The Chip Shortage Was Supposed to Be a ‘Sputnik...

Husband’s Destruction of His Stepdaughter’s New Piano Enrages the...

One key economic sign shows that inflation in Europe...

Inside the UK’s Self-Inflicted Financial Crisis

Pollution from Florida mining a concern with Hurricane Ian

Kentucky suspect shot and killed deputy who let him...

What Is A Human?

Rare in US for an active shooter to be...

The best Black Friday deals on coffee and espresso...

Biden administration scales back student loan forgiveness for some,...

Meet the border-district Republican at the immigration fight’s ‘epicenter’

Are attacks on Christians in Nigeria on the rise?

The Edsel, Quibi and CNN+? New addition to business...

Eric Greitens case at center of scrutiny for St....

Kyrsten Sinema’s courage, Washington hypocrisy, and the politics of...

Pennsylvania is the latest destination for ‘Biden Air’ illegal...

Alex Blackwell on cricket, retirement and LGBTQ+ inclusion: 'I've had to examine...

Carl Froch column: Anthony Joshua could retire if he loses convincingly to...