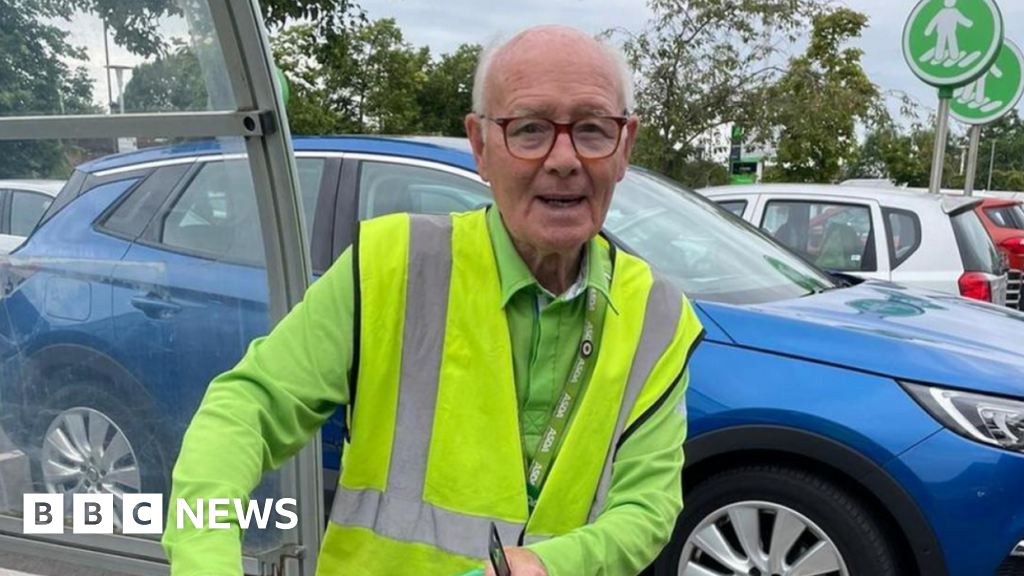 An 89-year-old supermarket worker who is Asda’s oldest employee said he loved his job and had no plans to retire.

John Bumford is a porter at the store in Shrewsbury, Shropshire and said he loved hearing customers’ stories.

The retired RAF radio technician started working there in 2000, when it was a Safeway, believing he was was “getting under his wife’s feet a bit”.

Mr Bumford said people were often “shocked” by his age and that he regularly helped carry shopping.

“One lady wanted some stones lifting into her car,” he said, adding she asked for someone younger when he offered to help.

“The customers and I get on really well and I know most of them.”

Image caption, Mr Bumford said: “I was getting under my wife’s feet a bit when I retired so I thought I’d better get another job”

Mr Bumford, who has been been married to wife Betty for 64 years, said he took the job at the supermarket after he retired.

He was a television engineer for 40 years and spent 10 years in the Royal Air Force as a radio technician, teaching at the No. 1 Radio School based at RAF Locking in Weston-super-Mare.

“I wasn’t sure whether I’d like the job when I first started but they said just give it a go for a month or two and see how you get on,” he said.

More than 20 years later, he is still there and said he had no plans to give up any time soon.

Store manager Kester Williams said: “Customers love him and he always has a smile on his face.

“He is always here, rain or shine, helping customers and other colleagues.” Opinion | A Surprisingly Simple Way to Make Sure...

NFL to Modify Concussion Protocol After Injury to Dolphins...

Mack Maine on investing in emoji and NFT startup...

Mexico says Constellation brewery to be built by river...

Here’s why the founder of Zara’s clothing empire is...

Three women brutally killed in one day in France,...

Rainn Wilson “changes” his name to raise awareness for...

A new island is forming in the Pacific Ocean...

GameStop Terminates Finance Chief as It Works to Turn...

Us midterms: What is divided government and what’s the...

N.J. will almost certainly not be the first primary...

Who is the best quarterback in college football right...

The Venice Biennale Was Surrounded By, And Part Of,...

After a 100 year absence, California condors are released...

What we know so far about the Idaho college...

Samsung and iFixit will launch a self-repair program for...

Gay Travelers Gather at DISNEY to Vacation and Make...

Kinzinger says he “would love” for Pence to testify...

New book shares the ‘key’ to happiness as you...

Prisoner released by Russia ‘treated worse than a dog’

Wind energy boom and golden eagles collide in the US West