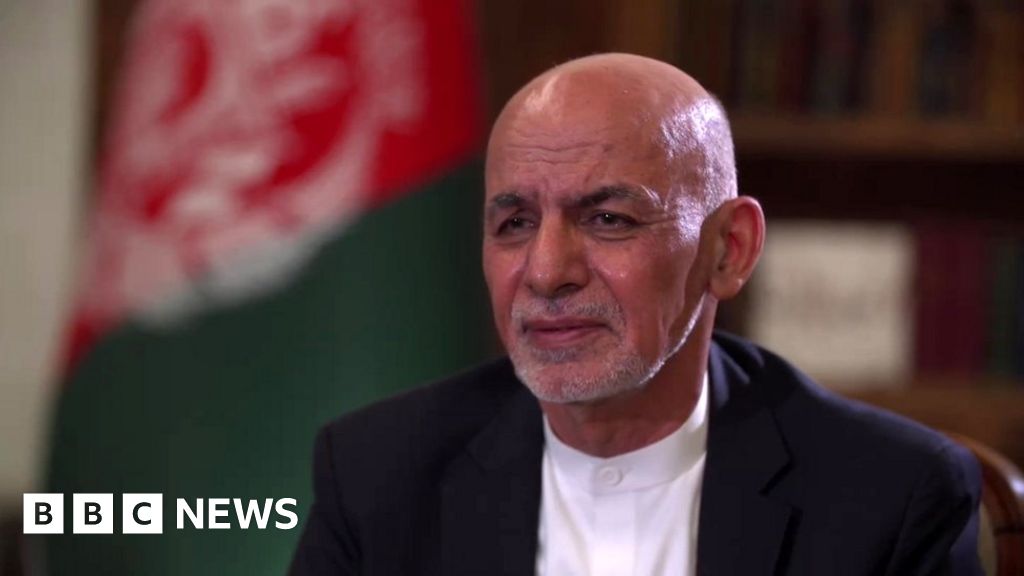 Afghanistan’s two former presidents have given wide ranging interviews to mark the first anniversary of the fall of the country’s capital, Kabul, to the Taliban.

The Islamist insurgents seized the city on 15 August last year amid little resistance, as the Western backed government collapsed, and national army troops surrendered in their thousands as the Taliban rapidly took control.

Speaking separately to US and German media, Ashraf Ghani and Hamid Karzai criticised the withdrawal of US troops from the country early last year.

Mr Ghani, who was Afghanistan’s president from 2014 until the Taliban took hold, also defended his decision to flee Kabul as the insurgents surrounded the capital. He was heavily criticised for leaving, but told CNN that his defence minister had said the city could no longer be defended.

“The reason I left was because I did not want to give the Taliban and their supporters the pleasure of yet again humiliating an Afghan president,” Mr Ghani said, appearing to refer to former president Mohammad Najibullah, who was in office from 1986 to 1992.

The communist-era leader was captured, tortured and killed by the Taliban when they seized Kabul in 1996.

“I have never been afraid,” Mr Ghani insisted. “I was the last to leave.”

The 73-year-old also said that his immediate surroundings in the Arg, Afghanistan’s presidential palace, had become unsafe. He alleged that one his cooks in the residence had been offered $100,000 (£82,443) to poison him.

But while Mr Ghani, who now lives in exile in the United Arab Emirates, attacked the lack of Western support for his government, he refused to say whether he felt “betrayed” by the US.

“I don’t use those types of words,” he said. “I do not have the luxury to engage in blaming or sense of betrayal. Superpowers, big powers, decide on the base of their national interest. What I hope is that they’ve considered the implications of those.”

Mr Ghani also denied allegations that he fled with $5m (£3m) looted from the presidential palace, and tens of millions more from a vault at the National Directorate of Security.

“This is part of a disinformation campaign,” he said. “They have investigated and found nothing.”

Last week, a US congressional report concluded that it was highly unlikely that Mr Ghani and his staff transported such a huge amount of cash on escape helicopters during the frenzied evacuation of Kabul.

Meanwhile, his presidential predecessor, Hamid Karzai, also condemned the US withdrawal, calling it “disgraceful” in an interview with German broadcaster Deutsche Welle (DW).

Mr Karzai, who left office in 2014 after two terms as Afghanistan’s leader, has remained in Kabul since the Taliban takeover and denied suggestions that he is a prisoner of the regime, as some media outlets have suggested.

During the interview, he alleged that some people in neighbouring Pakistan supported the Taliban in its takeover, a suspicion long held by former Afghan security officials.

“You heard the former prime minister of Pakistan, Imran Khan, speaking to the foreign ministers of the Islamic world in Islamabad, trying to justify that Afghan girls don’t go to school, trying to blame it on traditions, which is wrong, which is entirely wrong,” Mr Karzai told DW.

Imran Khan, who is no longer Pakistan’s prime minister, has previously denied that it is an ally of the Taliban, but has been accused by many nations, including the United States, of supporting the regime.

Mr Karzai, 64, urged the Taliban to reintroduce education for girls, telling DW that the interim regime needed an “answer very soon” on the question.

Girls have been denied access to post-primary education since the Taliban takeover, and the hard-line leader, Hibatullah Akhundzada, is said to oppose its reintroduction.

But Mr Karzai said that there can be “no compromise here, no way that we will allow Afghan girls being denied education”.

He also offered a tone of defiance, rejecting the suggestion that Afghanistan’s finest days are behind it.

“We are among the oldest countries and civilizations in this part of the world,” he said. “We will be fine. This is a blimp in the millenniums of our history. This will go away and we’ll be back on our feet and strong.” Global COVID deaths are the lowest they’ve been since...

How to run data on Kubernetes: 6 starting principles

In race to win, UK Conservatives accused of ignoring...

Is Covid Getting Worse?

Fire rips through home in Clairton

Miferia wants to expand its wholesale inventory marketplace across...

Shift to EVs too slow to avoid “catastrophe,” report...

Tarkovsky, Shaw, And The White Birds

Their Photos Were Posted Online. Then They Were Bombed

Cost of living: Families who care for relatives’ children...

Biden says sub he commissioned will enhance US security

Opinion: No more union-busting. It’s time for companies to...

DJI suspends sales in Russia and Ukraine to prevent...

Instagram is testing a feature that lets you pin...

Family calls for justice after 70-year-old is killed in...

Hunt for missing woman last seen getting into van

EXPLAINER: What’s the impact if Europe cuts off Russian...

Framework made a modular, repairable Chromebook

New Microsoft Azure services will help us learn about...