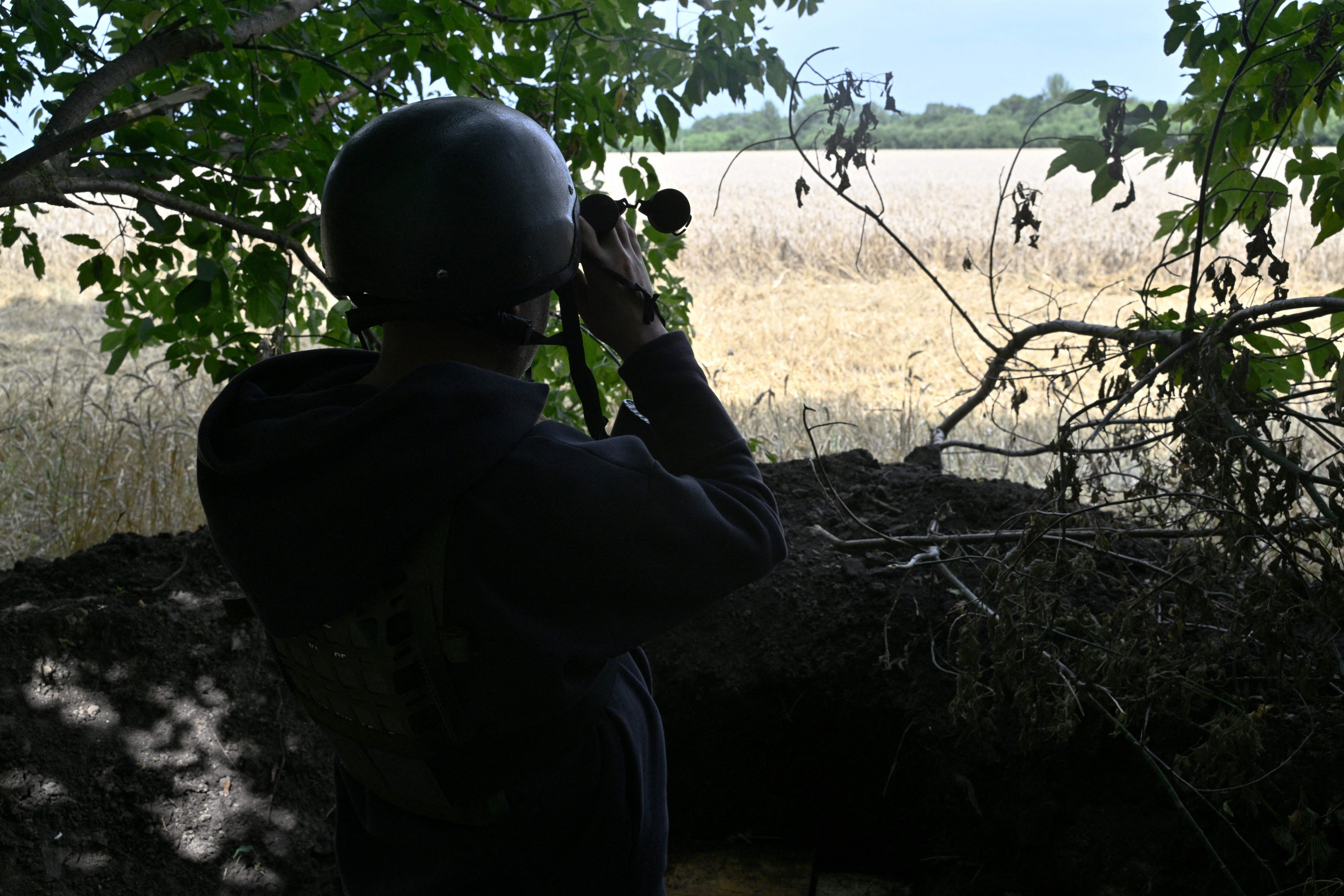 The governor of a region in northeastern Ukraine says the Russian military opened a daylong bombardment of multiple towns that didn’t result in casualties but left buildings and crops damaged.

Dmytro Zhivytskyi, governor of the Sumy administrative district, said in a Telegram post Friday that Russian forces launched a total of nearly 200 missile strikes that began in the morning and lasted into the evening. The accusation is only the latest involving Russian forces bombarding Sumy, which shares a border with Russia.

Zhivytskyi said in the post that the attack began at 11 a.m. Friday in the communities of Yunakivka and Khotin that involved mortar shelling, a rocket salvo, artillery and an airstrike. A wheat field was burned as the result of the shelling and damages are being calculated, he said.

The governor of Ukraine’s Sumy region says Russian has bombarded it with nearly 200 strikes in one day. Above, a Ukrainian army serviceman stands guard at a position in the northeastern Sumy region on August 2, 2022, as the Russia-Ukraine war entered its 159th day.Genya SAVILOV/Getty Images

Russian forces after 1 p.m. targeted the Mykolaivka village with a total of 60 strikes, according to Zhivytskyi. Later that afternoon, Esman was attacked and shelled with over 40 strikes, he said.

“At least 2 households, a fence and outbuildings were damaged as a result of the shelling,” Zhivytskyi said in the post.

Finally, Russian forces began shelling Shalyhyne at 6:30 p.m., which was followed with jet artillery, according to Zhivytskyi.

Other parts of Ukraine, notably the Black Sea coast and the Donbas region, have seen more intense fighting during the war. But Zhivytskyi and other Ukrainian officials have reported multiple incidents where the Sumy administrative district has been targeted by Russian forces.

Earlier this week, Zhivytskyi said the Russian military shelled three towns in the region, resulting in no casualties but leaving homes and commercial buildings damaged. In June, he said Russian forces wounded a child with phosphorus bombs. In April, Zhivytskyi reported Russians shelling the region more than 50 times in a half hour. As a result of the shelling, Ukrainian officials banned anyone from coming within one kilometer, or a little over half a mile, of the border with Russia.

Newsweek reported earlier this month that Ukrainian officials are investigating multiple alleged war crimes against Russia, including 2,000 illegal deaths and injuries of civilians, 166 cases of torture and about 5,000 cases of damage to civil objects. Ukraine’s Office of the Prosecutor General said it has identified some 600 Russians, mostly soldiers, for war crimes that include rape, torture and murder.

Russian officials have repeatedly denied the accusations of war crimes and have made similar charges against Ukraine. Mikhail Mizintsev, a Russian defense official, told the state-run TASS news agency last month that Ukraine was dispatching operatives to Sumy and other regions to threaten citizens sympathetic to Russia.

Newsweek has reached out to the Russian Ministry of Defense for comment.

How Ukraine is responding to Russia’s new offensive in...

Mobile, internet service mostly back in Canada after outage

Wu shifts her agenda into overdrive

Microsoft has rolled back this controversial Windows 11 update

A New Way to Curb the Rise of Oversized...

Ex-B2K member Omarion: You don’t need to take a...

Next China: Worry About Land Sales

NHS Patients Are Finding It ‘Too Difficult’ to Book...

Conservatives Should Demand Answers From the CIA

Blaze breaks out in Highlands during wildfire warning

AWS has made it easier to migrate your workloads...

WhatsApp’s next update could make your status bar actually...

Phoenix Sets Record for US Cities With 13% Rate…

Analysis: Hint of a Fed pause opens door to...

Fox News Contributor Says Trump May ‘Talk Himself Into’...

Some antidepressants may make heatwave challenging