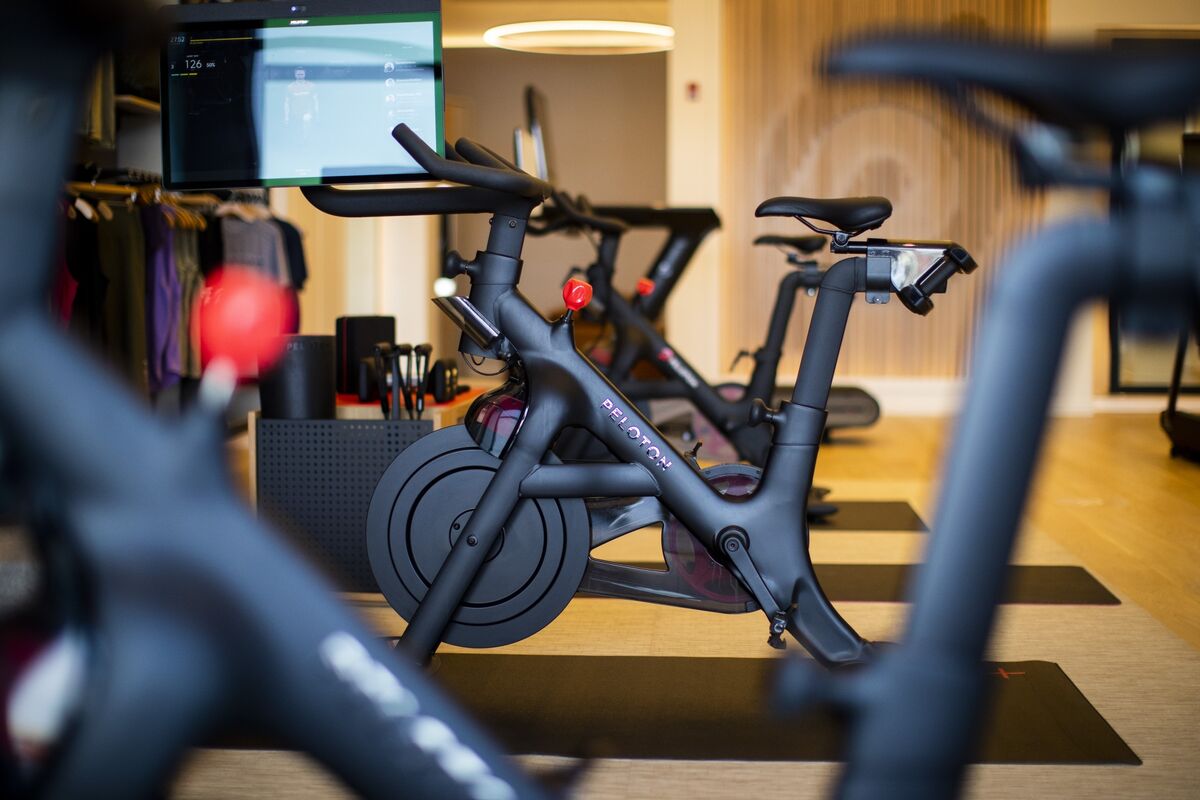 The lawsuit centers on digital goods Peloton provided to members, which the plaintiffs say arent taxable in their states of residenceNew York, Virginia, and Massachusetts. Yet when the company charged a $39 membership fee to access those products, it knowingly and unlawfully also charged the plaintiffs sales taxes, according to the

complaint filed Thursday at the U.S. District Court for the Southern District of New York. How’s this for a flex from Jack Antonoff
Read more

Navalny’s doctor: Putin critic ‘could die at any moment’

A doctor for imprisoned Russian opposition leader Alexei Navalny, who is in the third week of a hunger strike, says his health is deteriorating rapidly and the 44-year-old could be on the verge of death
Read more

Fifa will hold an online summit with its member associations on 30 September to discuss the international men's and women's calendar.
Read more

US to give Afghanistan 3M doses of J&J vaccine

The U.S. plans to give Afghanistan three million doses of the Johnson & Johnson (J&J) vaccine as the country is facing a surge of coronavirus cases, a senior administration official told The Wall Street Journal.
Read more

First woman of color nominated to T-Mobile board

The first woman of color has been nominated to T-Mobile's U.S. board of directors, the company announced on Monday.Bavan Holloway's nomination will be up for a vote on June 3 at the annual stockh...
Read more

Chloe Kelly scores a late winner against Reading to move Manchester City to the top of the Women's Super League.
Read more

Hawaii's legislature is considering legislation banning sunscreens that contain harmful chemicals affecting the environment."Beginning January 1, 2023, it shall be unlawful to sell, offer for sale, or...
Read more

Tackling violence against women a priority despite criticism –...

The home secretary says government is committed "at the highest level" to tackling violence against women.
Read more

1 killed, at least 8 others wounded in shooting...

A shooting in Savannah, Georgia, on Friday killed one person and injured at least eight others, including a 2-year-old and a 13-year-old, police said.
Read more

"It looks to me right now like the American people might never find out the truth," the former Republican New Jersey governor said.
Read more

“The Late Late Show” host received the Most Excellent Order of the British Empire for his work as an actor. Princess Anne performed the investiture to honor the British performer’s “services to drama.” Gayle King reports.
Read more

Apple AirPods Max crash down to lowest price ever...

The Apple AirPods Max have a whopping $100 discount in this weekend's Apple deals at Adorama - the biggest seen yet.
Read more

Despite being one of the first countries to develop a jab, Covid cases are sharply rising in Russia.
Read more

Broadway to turns lights back on in September

Britain's Lizzie Deignan rode to a landmark victory in the inaugural Paris Roubaix Femmes as rain, mud and crashes made it a memorable debut for the world's best female riders over the infamous cobbled course on Saturday.
Read more

"Heaven" singer Jason Aldean paid tribute to his longtime friend and security guard Ryan Fleming, who pulled the star from the stage when a gunman opened fire during his performance at a festival in Las Vegas.
Read more

Monster Hunter Stories 2 is a breath of fresh air in the JRPG space, and is a perfect gateway to the series as well as the genre.
Read more

Will Lord has more than 100,000 Facebook followers learning about his prehistoric way of life.
Read more

Afghans in Greece demonstrate for peace amid Kabul chaos

Afghans living in Greece took to the streets of the country's capital on Saturday calling for peace after the Taliban consolidated power and amid an increasingly tumultuous security situation in Afghanistan, Reuters...
Read more

Look here, not there! GOP lawmakers question timing of...

Republican lawmakers questioned the timing of the Centers for Disease Control and Prevention’s decision to ease indoor mask requirements on Thursday as the Biden administration contends with crises on several fronts.
Read more

BBC Sport speaks to those involved in Leicester City's success as the women's team secure promotion to the top-flight for the first time in the club's history.
Read more

Anchorage mayor apologizes for defending use of Holocaust imagery...

The mayor of Anchorage, Alaska, has apologized for defending the use of Holocaust imagery by critics of mask mandates. Anchorage Assembly members are considering a measure to require masks in ind...
Read more

Commonwealth Games to cut compulsory sports from 16 to...

The number of compulsory sports that Commonwealth Games hosts will have to stage in future is set to be cut from 16 to just two.
Read more

The head of Belarusian national airline Belavia on Saturday condemned as "despicable" the decision by numerous EU countries to impose airspace restrictions on the carrier following the forced landing of a passenger jet in Minsk.
Read more

This week, Dana is joined by Fashion Designer, Entrepreneur and Author Rebecca Minkoff to discuss how she creates balance in her life.
Read more

Steep decline in giant sea turtles seen off US...

Leatherback sea turtles have been plying the world's oceans for tens of millions of years, but scientists say a rapid decline in their numbers means they could disappear from U.S. West Coast waters within decades
Read more

The first direct talks between North and South Korea in more than two years appear to be paying off. Diplomats from both sides announced that North Korea will send athletes to the Winter Olympics in South Korea next month. The military hotline that connects t…
Read more

An unexpected loss against unfancied Oman has left Hajime Moriyasu needing to lead his team to victory over China in Doha on Tuesday if the Japanese coach is to prevent pointed questions being asked about his future at the helm of the Samurai Blue.
Read more

The aerospace technology firm agrees to a £6.3bn takeover bid from US company Parker-Hannifin.
Read more

Closing gender gaps exacerbated by the coronavirus pandemic could help boost the recovery of emerging economies and improve their credit ratings, according to Moody’s Investors Service.
Read more

A GoFundMe page was set up following the fatal shooting and has raised more than $180,000 for Aiden Leos' family.
Read more

Mike Ditka is a Hall of Fame tight end and is behind the idea of Tim Tebow returning to the NFL to play the position he once dominated while with the Chicago Bears in the 1960s.
Read more

Arizona’s Maricopa County to replace all voting machines after...

Arizona's Maricopa County announced Monday that it plans to replace all of the voting machines that were turned over to the state Senate and other officials overseeing the audit of 2020 presidential election results...
Read more

Lev Parnas and Andrey Kukushkin have each pleaded not guilty.
Read more

As we gear up for the planned reopening of Disneyland park and Disney California Adventure park on April 30, we’re excited to share details about the attractions and entertainment you will be able to experience on your next visit.
Read more

How Not to Have Arguments

From the perspective of eternity our little disagreements must look very petty indeed. The post How Not to Have Arguments appeared first on The American Conservative.
Read more

Iran claims number of their news websites appear to...

A number of Iran-affiliated websites appear to have been seized by the United States government as part of a law enforcement action. Elizabeth Palmer reports, having recently returned from Tehran, the actions come amid heightened tensions between the two riva…
Read more

Running a Wartime Evacuation is Always Ugly. I Know...

The criticism of Biden’s Afghanistan withdrawal ignores the reality on the ground.
Read more

Brazil has reached the second-highest number of reported COVID-19 deaths, second only to the United States.
Read more

Chinese steel producers, a cryptocurrency platform, Japanese lasers and parking lots and a Vietnamese jeweler were among bets pitched by Asia hedge funds at the Sohn Investment conference in Hong Kong.
Read more

The rock star says claims by Game of Thrones actress Esme Bianco are part of a "coordinated attack".
Read more

The Samsung Galaxy Z Fold 3 could have the best foldable display this year, but the camera might disappoint.
Read more

The military has taken control of the government of Zimbabwe and placed President Robert Mugabe and his wife under house arrest, although its leader General Constantine Chiwenga says that is not the case. Former Deputy assistant Secretary of State for African…
Read more

The White House sees some positive signs to the new round of negotiations. They also see little downside in letting the talks play out.
Read more

The World Is Awash in Dollar Liquidity That No...

There's a seismic shift underway in money markets, the equivalent of going from famine to feast.For years, the premium paid for dollars over the euro, Japanese yen and so on in the cross-currency markets has been negative, indicating rampant demand for greenb…
Read more

Must see video: Piggy pigs out at snack time

We don't know much about this piggy, but he sure is making some interesting squealing noises as he noshes on potato chips.
Read more

The Senate Appropriations Committee on Wednesday advanced its first spending bills for fiscal year 2022 as senators prepare for their fall recess and the deadline to avert a government shutdown quickly approaches.T...
Read more

India's P.V. Sindhu believes there is little to choose between the top 10 women badminton players and the absence of injured champion Carolina Marin has not cleared a path for her to win Olympic gold in Tokyo.
Read more

Parents in Virginia's Loudoun County are hammering the county's school board and the Department of Justice (DOJ) Thursday as controversies cascade in the school district that's become a national political hotbed.
Read more

Ford on Monday issued a recall notice for more than 600,000 of its Explorer SUVs due to a hazardous roof rail cover that may become detached.According to Ford, the recall will affect 620,483 vehicles in the U.S., 3...
Read more

Ida is now gone, but it leaves behind a...

Ida is now gone, but the devastation it has left behind is affecting millions of people from the Gulf Coast to the Northeast. Here's a look at how it impacted several states.
Read more

A coastal storm in the Northeast brought up to a foot of snow in Bangor, Maine, and plenty of powder elsewhere. According to the National Weather Service, it was the earliest snowfall in Columbia, South Carolina, beating a 100-year-old record by eight days; …
Read more

Can anybody deny Fabio Quartararo and Monster Energy Yamaha? Find out with a MotoGP live stream of the Spanish Grand Prix online - no matter where you are.
Read more

"We have the tools to beat Covid if we come together as a country and use the tools we have," Biden said.
Read more

People preparing for a post-vax summer are likening themselves to the emerging insects. WIRED commissioned one cicada for its take.
Read more

Here are some upcoming events of interest to the banking law community. Unless otherwise noted, all times are local.
Read more

Harry Kane wins Golden Boot – but is this...

After Harry Kane and Gareth Bale combine to ruin Leicester's Champions League hopes, BBC Sport ponders what is next for the two Spurs forwards?
Read more

Canada plans to take in 20,000 Afghans to protect them from Taliban