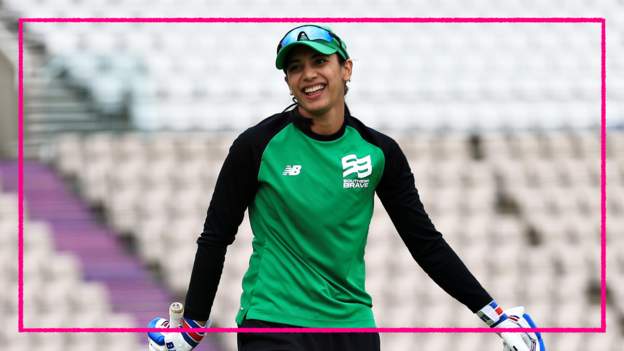 Southern Brave opener Smriti Mandhana will play no further part in The Hundred after deciding to return to India to see her family before their series in Australia from 19 September.

Mandhana, who has scored 167 runs in seven innings, will be replaced by Ireland’s Gaby Lewis.

“It’s been a fantastic competition and I’ve really enjoyed it,” said Mandhana.

“I would love to be able to stay with the team until the final but we’ve been away from home for a long time with more tours ahead. I’ll be watching the team at Lord’s and hoping they can continue our good form.”

Brave qualified for the 21 August final at Lord’s with a 39-run win over Welsh Fire on Wednesday, with Mandhana scoring 78, while Kaur’s Originals’ side are bottom of the eight-team table.

In the men’s competition, third-placed Trent Rockets have recalled Marchant de Lange, who took eight wickets in four games earlier in the tournament, to replace the injured Wahab Riaz. ISIS-K explainer: Who are they and what’s their agenda?

The group is an affiliate of the Islamic state (ISIS) and is described as the "mortal adversary" of the Taliban.
Read more

‘I Teach Sex Ed to Millions on Tik Tok—People...

My platform allows me to show people that there is no shame in saying the words vagina and vulva on social media. We have commercials for erectile dysfunction so why can't we talk about vaginismus and vulvodynia?
Read more

Nikon has revealed two macro lenses for mirrorless cameras like the Nikon Z7 II – and you'll be able to buy both very soon.
Read more

Should the U.S. stop travel from West Africa?

Many viewers asked about ending travel from West Africa all together, so Scott Pelley put the question to Dr. LaPook.
Read more

Nepal’s president has dissolved Parliament and announced fresh elections after the prime minister, who was heading a minority government and was unlikely to secure a vote of confidence in the chamber, recommended the move
Read more

Three Wilmington, Delaware, police officers were shot on Wednesday while responding to a call, ...
Read more

Sudan strongman is seen as an insider with powerful...

Gen. Abdel-Fattah Burhan, who led this week's coup in Sudan, has vowed to usher the country to an elected government
Read more

John James to portray Biden in upcoming biopic ‘My...

John James is set to portray President Biden in an upcoming film about his son Hunter Biden, The Daily Mail reports.The "Dynasty" actor was recently tapped for "My Son Hunter," a biopic from conservative filmmakers Phelim McAleer and Ann McElhinney...
Read more

The Chicago Auto Show is returning in July, the first major convention planned in the city after taking a hiatus due to the COVID-19 pandemic.Chicago Mayor Lori Lighfoot (D) made the announcement on Tu...
Read more

Autopsy: Texas boy’s cause of death ruled a homicide

Two of the Christian missionaries who were kidnapped in Haiti last month have been released, according to the ministry.
Read more

Arkansas down to 8 ICU beds as Covid rips...

China reported more COVID-19 cases as it entered the third week of its current outbreak on Monday, while some cities added rounds of mass testing in the effort to stamp out locally-transmitted infections.
Read more

Mr. Goxx is relatively new to the world of cryptocurrency, but he's enjoying a tidy profit.
Read more

DC military base on lockdown after report of armed...

Greyhound Lines Inc. will pay $2.2 million to settle a lawsuit over the bus line’s practice of allowing U.S. Customs and Border Protection agents to board its buses in Washington state to conduct immigration sweeps
Read more

Tesla accused of violating environmental regulations in US and...

Tesla defended itself in a Wednesday filing after both U.S. regulators said the automaker has not proved its compliance with environmental regulations and German officials accused it of not taking back customer batteries.
Read more

PRESENTED BY AT&T To view past editions of The Hill's 12:30 Report, click here: http://bit.ly/1M1mIfwTo receive The Hil...
Read more

Apple gives up on its original HomePod in favor...

Apple is pulling the plug on its pricey HomePod smart speaker.
Read more

Former President Trump said he "probably won't" get a third shot of the COVID-19 vaccine if several health regulators agree to authorize it for use among most Americans.
Read more

Florida Governor Ron DeSantis said he has sued the Biden administration and other parts of the government over vaccine mandates for federal contractors. Speaking...
Read more

A legal group started by former Trump aide Stephen Miller filed a class action lawsuit on Monday on behalf of Texas's agricultural commissioner and others arguing that the Biden administration's funds reserved for "...
Read more

Eight dead after fans surge toward stage at Houston...

Eight people were killed and many more injured on Friday as fans surged toward the stage during a music festival in Houston, Texas.Authorities said during a press conference that the "mass casual...
Read more

It's clear video will be the central focus at the trial of a white former police officer charged with killing George Floyd, and not just the widely seen bystander video that set off nationwide protests last year
Read more

The Philippines expects a deficit of 400,000 metric tons of pork this year or a quarter of its requirement due to the African swine fever, the Department of Agriculture said, as it pushed for more imports.
Read more

What a new report tells us about how people...

More than half a year after the 2020 presidential election, research is starting to provide a more precise picture of the demographic composition of the 2020 electorate, how various groups voted, and what changed from previous elections. The latest entry, rel…
Read more

Verizon has chosen Ericsson to help it further build out its 5G network in the US.
Read more

India’s massive fleet of coal plants are running dangerously low on stockpiles, which may force the nation to buy expensive shipments of the fuel or else risk blackouts.
Read more

"There should be a motto around here: ‘Why do today what we can do tomorrow?’ It's ridiculous," said Sen. Jon Tester.
Read more

The communities minister says she is hopeful she will able to attend a concert this summer.
Read more

Texas board recommends Abbott give posthumous pardon to George...

A Texas pardon board voted unanimously on Monday to recommend that George Floyd be given a posthumous pardon for a 2004 drug conviction.In a statement to ...
Read more

Arrest made in brutal assault of 61-year-old Asian man

Jude Morris, from Corfe Castle, was described as one of the sport's brightest young talents.
Read more

Kavinder Singh, managing director and chief executive officer of Mahindra Holidays & Resorts India Ltd., discusses the outlook for his business in the home market and abroad amid the coronavirus pandemic. He speaks with Haslinda Amin and Rishaad Salamat on "B…
Read more

Intisar al-Hammadi, who denies committing an "indecent act", has been detained since February.
Read more

A sketch on a popular Italian TV show mocking Chinese people has launched a debate about racism, and satire, in Italy
Read more

Our top Australian streaming picks this week include Loki, Lupin: Part and the finale of Fear the Walking Dead's sixth season.
Read more

‘Buchanan said I could be world champion, I’ve proved...

Disney+, The Walt Disney Company's online streaming service, has removed an episode of "The Simpsons" in Hong Kong that showed characters visiting Beijing and Tiananmen Square an features one character reading a sign that...
Read more

Extended interview: Malala Yousafzai on the future of women...

The Kremlin is sending the West a message, but how big a risk is there of conflict?
Read more

Senate Republicans are about to hand President Biden a huge political victory by voting for a historic $1 trillion infrastructure package that the president can then tout as fulfilling a campaign pledge to restore b...
Read more

How a dating app meetup led to alleged murder,...

OPINION: The public distrust and polarization that the former president fostered will be with us for a long time to come.
Read more

Yet another rumor suggests new M1 MacBooks are coming...

Former President Donald Trump returned to Iowa for the first time since he lost the 2020 election for a rally on Saturday. He criticized President Biden and repeated his false narrative that the election was stolen. Kayla James, a reporter for CBS affiliate K…
Read more

Sanders: Trump has turned fear into anger against Muslims...

At least 12 U.S. service members were killed and 15 injured in an attack near Kabul airport, the Pentagon said.
Read more

Monsignor Basil O'Sullivan looks back on his life as he retires after 33 years as the town's parish priest.
Read more

A Los Angeles judge has tossed former Rep. Katie Hill's (D-Calif.) lawsuit against The Daily Mail over the website's publications of nude photos of her. ...
Read more

Bipartisan senators are calling for a hearing into how the Medicare program could, or even should, cover an expensive new Alzheimer's drug with questionable benefit.Sens. Elizabeth Warren (D-Mass...
Read more

Stagecoach in talks about all-share merger with National Express...

Another Greenberg wants to turn an insurance-industry giant into a behemoth.
Read more

The U.S. and Israeli leaders have worked together for decades despite deep disagreements.
Read more

Nvidia has announced that it will be adding native DLSS support for the Unity game engine before the end of 2021.
Read more

Tens of thousands of Virginia Republicans will head to community colleges, church parking lots and county fairgrounds on Saturday to choose nominees in what activists and officials say remains an unpredictable battle for...
Read more

‘WE CAN EXHALE’: CA reacts to CHAUVIN conviction —...

Facebook’s Speech Policies Are Even More Arbitrary Than We...

The case of Facebook v. Trump is an open invitation to political actors to swoop in to reduce the social network’s power or write new rules for it
Read more

Chewing Gum Is Making a Comeback as Masks Come...

Chewing gum, coming off a brutal year for retail sales, is back in demand as American start taking off their masks -- and don’t always like what they smell.
Read more

Newcastle's new owners will have more talks with manager Steve Bruce next week as they begin their review of club operations following the takeover.
Read more

Smarty has one of the best cheap SIM only deals around with...