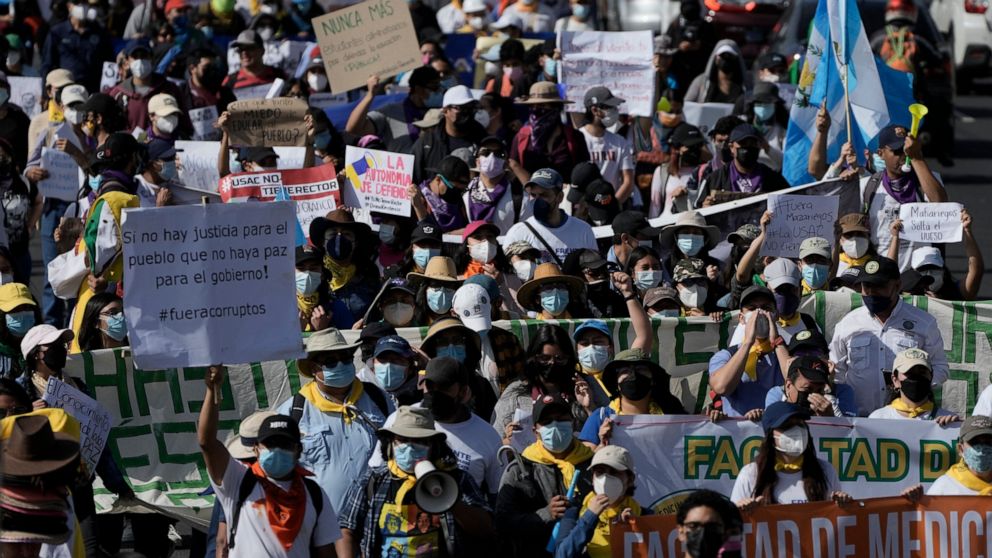 GUATEMALA CITY — Hundreds of Guatemalans set out from various points of the capital Thursday to protest alleged corruption by a deeply unpopular government, the high cost of living and attacks on freedom of expression.

University students, faculty and other employees marched from the campus of the capitals only public university carrying signs demanding that the corrupt get out. If there is no justice for the people, let there be no peace for the government! read one.

President Alejandro Giammattei is under fire for his reappointment of Attorney General Consuelo Porras, who has been criticized by the United States government and others for blocking corruption investigations and instead pursuing the prosecutors and judges who used to carry them out.

Most recently, her office arrested award-winning journalist José Rubén Zamora whose El Periodico newspaper has a reputation for corruption investigations, including against Giammattei.

Marchers were headed for Guatemala Citys historic downtown and the seat of power.

Leaders of Guatemalas Indigenous population joined Thursdays march as well, warning that the rising cost of living in the country was harming the people.

Enrique Saquic, an Indigenous leader from Santa Lucia Utatlán, said they are strangling us, our brothers, our people are those who are suffering all this high cost of living.

He also noted that the co-optation of the justice system had left Guatemalans defenseless.

Daniel Pascual, leader of the Committee of Farmer Unity, said the cost of living means an increase in hunger for the poor.

The corruption in the end is the stealing of money from the people and those who pay taxes are the poor and middle class, because the rich dont contribute equitably to the country, Pascual said.

The United States has sanctioned Porras and included her and others on a list of corrupt actors in Guatemala who pose a threat to democracy. Giammattei however has stood by her, reappointing her to a second four-year term earlier this year. Uber lets you send anyone an email claiming to...

At least 4 dead after house explosion in Pennsylvania:...

Samsung may snag a trick to beat the iPhone...

South Africa sex crime: ‘We want our bodies to...

Disney Backs Down Over Political Ads After Hulu Boycott...

What Is ‘Heatflation’? Soaring Temps Could Impact Grocery Costs

Airbnb ends rentals in China to focus on outbound...

Protecting the World’s Oceans and Leading by Example with...

‘Watchdog moms’ on TikTok are trying to keep minors...

A new way to explore Australia’s most mysterious region

Boris Johnson says he will resign as U.K. prime...

Now is a great time to buy a second-hand...

Pittsburgh police looking for suspects after student shot on...

Champions League Final: I have asthma and was tear...

How a fight over transgender rights derailed environmentalists in...

America’s attics, basements and garages are filled with treasures