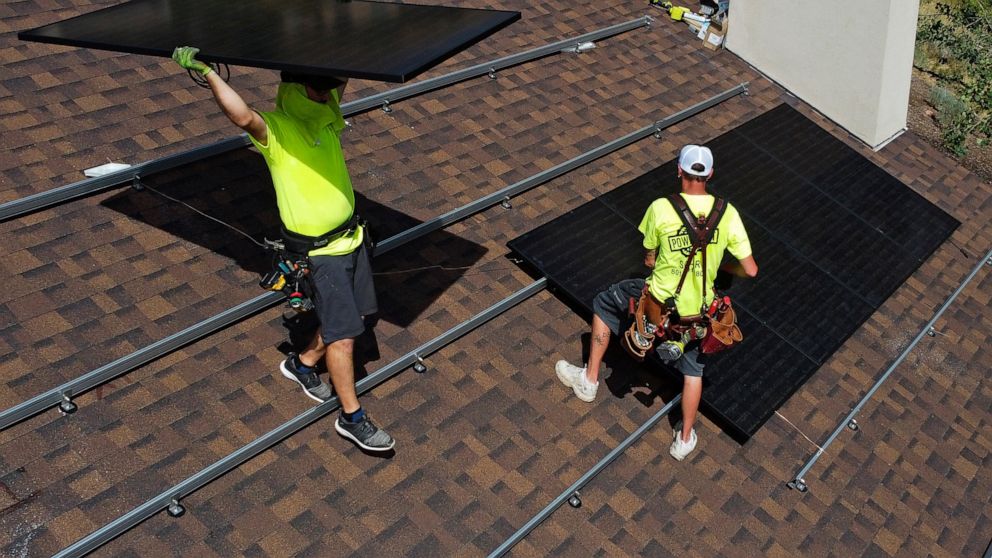 After decades of inaction in the face of escalating natural disasters and sustained global warming, Congress hopes to make clean energy so cheap in all aspects of life that its nearly irresistible. The House is poised to pass a transformative bill Friday that would provide the most spending to fight climate change by any one nation ever in a single push.

Fridays anticipated action comes 34 years after a top scientist grabbed headlines warning Congress about the dangers of global warming. In the decades since, there have been 308 weather disasters that have each cost the nation at least $1 billion, the record for the hottest year has been broken 10 times and wildfires have burned an area larger than Texas.

The crux of the long-delayed bill, singularly pushed by Democrats in a closely divided Congress, is to use incentives to spur investors to accelerate the expansion of clean energy such as wind and solar power, speeding the transition away from the oil, coal and gas that largely cause climate change.

The United States has put the most heat-trapping gases into the air, burning more inexpensive dirty fuels than any other country. But the nearly $375 billion in climate incentives in the Inflation Reduction Act are designed to make the already plummeting costs of renewable energy substantially lower at home, on the highways and in the factory. Together these could help shrink U.S. carbon emissions by about two-fifths by 2030 and should chop emissions from electricity by as much as 80%.

Experts say it isn’t enough, but it’s a big start.

This legislation is a true game-changer. It will create jobs, lower costs, increase U.S. competitiveness, reduce air pollution, said former Vice President Al Gore, who held his first global warming hearing 40 years ago. The momentum that will come out of this legislation, cannot be underestimated.”

The U.S. action could spur other nations to do more especially China and India, the two largest carbon emitters along with the U.S. That in turn could lower prices for renewable energy globally, experts said.

Because of the specific legislative process in which this compromise was formed, which limits it to budget-related actions, the bill does not regulate greenhouse gas emissions, but deals mainly in spending, most of it through tax credits as well as rebates to industry, consumers and utilities.

Investments work better at fostering clean energy than regulations, said Leah Stokes, an environmental policy professor at the University of California, Santa Barbara. The climate bill is likely to spur billions in private investment, she said: Thats whats going to be so transformative.

The bill promotes vital technologies such as battery storage. Clean energy manufacturing gets a big boost. It will be cheaper for consumers to make climate-friendly purchasing decisions. There are tax credits to make electric cars more affordable, help for low-income people making energy-efficiency upgrades and incentives for rooftop solar and heat pumps.

There are also incentives for nuclear power and projects that aim to capture and remove carbon from the atmosphere.

The bill moves to ensure that poor and minority communities that have borne the brunt of pollution benefit from climate spending. Farmers will receive help switching to climate-friendly practices and theres money for energy research and to encourage electric heavy-duty trucks in place of diesel.

The Superfund program, used to pay for cleanup of the nations most heavily-polluted industrial sites, will receive more revenue from a bigger tax on oil.

The Rhodium Group research firm estimates the bill would dramatically change the arc of future U.S. greenhouse gas emissions, cutting them by 31% to 44% in 2030, compared to what had been shaping up to be 24% to 35% since 2005 without the bill, said Rhodium partner John Larsen. Clean power on the grid, an upcoming Rhodium report says, would jump from under 40% now to between 60% and 81% by 2030, he said.

Its not as big as I want, but its also bigger than anything weve ever done, said Sen. Brian Schatz, a Hawaii Democrat who leads the Senate climate caucus. A 40% emissions reduction is nothing the U.S. has ever come close to before.

As decisive a change as it is for U.S. policy and emissions, it still does not reach the official U.S. goal of cutting carbon pollution roughly in half by 2030 to achieve net-zero carbon emissions across the economy by 2050.

Not everyone is impressed.

“This law is big for the U.S. but in global terms long overdue,” said Niklas Hohne, co-founder of the New Climate Institute in Germany. “The U.S. has a long way to go on climate change and is starting from a very, very high emission level.

When U.S. historic carbon emissions are factored in, U.S. spending still lags behind Italy, France, South Korea, Japan and Canada, according to Brian O’Callaghan, lead researcher at the Oxford Economic Recovery Project at the University of Oxford. He noted the bill has nothing to fulfill America’s broken promise of billions of dollars in climate aid for poor nations.

President Joe Biden has frequently said America is back in the fight against climate change, but other leaders have been skeptical with no legislation to back his claim.

And there may be disappointment. Americans hoping to buy an electric car may find many models ineligible for rebates until more components are made in the U.S. Local fights over siting new renewable energy projects could also hamper the pace of the buildout, some experts said. Environmental justice communities are concerned they’ll be asked to accept new carbon capture projects.

Republicans, who unanimously opposed the bill in the Senate, say it would add to consumers energy costs, with House GOP Whip Steve Scalise claiming it wastes billions of dollars in Green New Deal slush funds.

Rhodiums Larsen, who crunched the numbers in the bill, said it would lead to consumers paying up to $112 less a year in energy costs.

As long as Ive been in this game, progress on climate has always been higher costs for consumers. Thats not how this bill works, Larsen said in an interview.

The Democrats didn’t have a vote to spare in the evenly divided Senate and Sen. Joe Manchin, a conservative Democrat from coal-producing West Virginia, had long dashed hopes of an ambitious deal. But two weeks ago, faced with public shaming by environmental groups and sharp criticism even from his own colleagues, he stunned Washington by announcing his support for a bill that reduces drug costs, targets inflation and boosts renewables. Since the deal was announced July 27, Manchin has been an avid cheerleader for its passage. Sen. Krysten Sinema, D-Arizona, provided the vital 50th vote, allowing Vice President Kamala Harris to break the Senate tie.

The result is a 755-page bill that spends money without directly taking on fossil fuels, a disappointment to many on the left. Gore said the fossil fuel industry ran a decades-long deeply unethical campaign to deceive people around the world, casting doubt on climate change science.

The industry will face higher royalties and new fees for certain excess methane emissions, a potent greenhouse gas a rare stick amid carrots. But the fossil fuel industry will remain a powerful force and have guaranteed opportunities to expand on federal lands and off the coast before renewables can be built in those places.

Nevertheless, the undeniable outcome of this will be a real expansion of wind and solar, said Harrison Fell, a professor focused on energy policy at North Carolina State University.

In 1988 on a steamy summer day, top NASA climate scientist Jim Hansen brought to public attention for the first time the decades-old concept of global warming when he told Congress carbon dioxide was heating up the Earth. That year became the hottest on record. Now, there have been so many hot years it ranks 28th hottest and Hansen has said he wishes his warnings didn’t come true about climate change.

Its a mark of shame that it took this long for our political system to react, said Bill McKibben, a long-time climate activist, adding that it leaves the fossil fuel industry with too much power. But this will help catalyze action elsewhere in the world; its a declaration that hydrocarbons are finally in decline and clean energy ascendant, and that the climate movement is finally at least something of a match for Big Oil. What PR firms are doing for Ukraine’s Ministry of...

Renewable Power Costs Rise, Just Not as Much as...

Cambodia scams: Lured and trapped into slavery in South...

US economy drops at 0.6% annual rate from April...

Scientist dies after being pulled from hospital bed on...

Analysis: How Republicans are driving the national agenda, even...

Babies Breastfed for a Year or More Better Protected...

French election: Voters react to the Macron and Le...

Woman charged with faking her kidnapping released from jail

Why Lindsey Graham is going all-in on Biden SCOTUS...