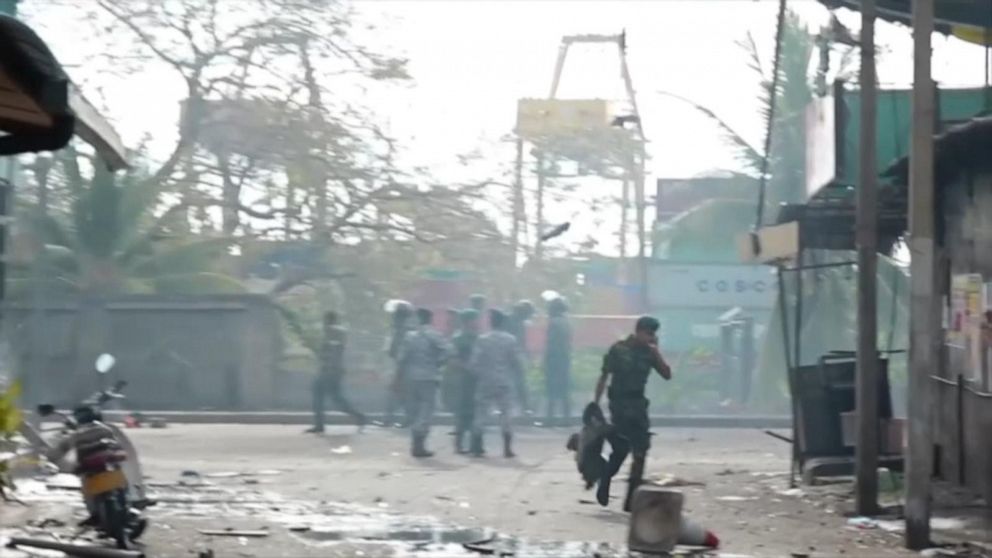 The charges filed Tuesday under the countrys anti-terror law include conspiring to murder, aiding and abetting, collecting arms and ammunition, and attempted murder, it said.

The attorney general also asked the chief justice to appoint a special three-member high court bench to hear the cases speedily, it said in a statement.

Two local Muslim groups that had pledged allegiance to the Islamic State group were blamed for the six near-simultaneous suicide bomb attacks on April 21, 2019. The blasts targeted three churches and three hotels.

Another suicide bomber who had entered a fourth hotel left without setting off his bomb, but later committed suicide by detonating his explosives at a different location.

Friction and a communication breakdown between then-President Maithripala Sirisena and then-Prime Minister Ranil Wickremesinghe were blamed for the government’s failure to act on near-specific foreign intelligence warnings ahead of the attacks. That led to the election of President Gotabaya Rajapaksa later in 2019 on a platform of national security.

Rajapaksa was a former army officer and a defense official who had played a decisive role in defeating Tamil Tiger rebels and ending a 26-year civil war.

The head of the Roman Catholic archdiocese of Colombo, Cardinal Malcolm Ranjith, has repeatedly charged that the investigation into the blasts was not being conducted properly. He said he believes the real conspirators are still at large and has accused authorities of trying to shield the masterminds.

Ranjith wrote a strong letter to Rajapaksa last month stating there are allegations that some members of the state intelligence services knew and met with the attacker who initially did not explode his bomb and asked the authorities to investigate. Citing speeches in Parliament by lawmakers, Ranjith said intelligence personnel also allegedly had a suspect released from police custody.

The president’s office said presidential legal affairs director Harigupta Rohanadeera had sent a detailed reply to Ranjith, but did not release the letter. Canada is planning legislation to end a general strike at the Port of Montreal that’s bound to worsen congestion at other sites and add to global shipping delays.
Read more

Two years ago, a 9-year-old girl accidentally shot and killed instructor Charles Vacca with an Uzi gun at an Arizona shooting range. Marc Lamber, representing the Vacca children who are suing the shooting range, tells CBS News why his clients are calling on l…
Read more

Review: Hanson brothers shine on 7-track ‘Against the World’

The guys from Hanson are celebrating 30 years as a band next year, and if that makes you feel old, it’s not their fault
Read more

Poland has seen an explosion of the COVID-19 pandemic over the past two days and if the current trend continues drastic steps will be needed, the health minister said on Wednesday, after the country reported over 5,000 daily cases for the first time since May.
Read more

HHS chief: ‘It is absolutely the government’s business’ to...

The remarks came in response to Republican criticism of the Biden administration’s latest push to persuade vaccine-hesitant Americans to get their shots.
Read more

An Ohio teenager has been sentenced to a term in a youth services facility in connection to the fatal shooting of an undercover Cleveland detective and his informant, according to ...
Read more

Cheteshwar Pujara still feels the sting of last year's drubbing in New Zealand but the batsman says India will be a different proposition when the sides clash again at the neutral venue of Southampton in next month's World Test Championship (WTC) final.
Read more

Emmanuel Macron is leading in the run-up to the first round of French presidential elections in April with 25% to 27% support and will likely face a far-right candidate in a decisive runoff vote, according to a poll by Ifop-Fiducial for Le Figaro newspaper.
Read more

Rate the players out of 10 as England take on Hungary in a World Cup qualifier in Budapest.
Read more

The White House on Tuesday downplayed any personal rift between President Biden and Sen. Joe Manchin (D-W.Va.) as some progressive Democrats ramped up their criticisms of the moderate senator after he voiced opposition to...
Read more

Steelers vs Bills live stream: how to watch NFL...

Here's how to get a Pittsburgh Steelers vs Buffalo Bills live stream and watch the NFL from anywhere, as Josh Allen and Big Ben face off in a clash of generations.
Read more

"CBS This Morning" takes a look at some of the headlines from around the globe.
Read more

2 measles cases in the U.S. put travelers on...

Health officials are warning travelers who went through airports in Newark, Detroit and Memphis this month that they may have been exposed to measles. As CBS News correspondent Michelle Miller reports, the cases are linked to two air passengers from abroad.
Read more

Jude Bellingham shines for Borussia Dortmund with a goal and an assist in their win at Besiktas in the Champions League.
Read more

Health officials in Colorado have predicted that the Delta coronavirus variant is likely to become the dominant strain circulating in the state after seeing a steady increase in recent weeks.
Read more

“Beijing’s actions continue to undermine the rules-based order and threaten the sovereignty of nations.”
Read more

Thousands in India given fake coronavirus vaccines at scam...

States with lower COVID-19 vaccination rates have seen a slower rebound in restaurant, hotel and other hospitality jobs.
Read more

What we know about the Surfside condo collapse

When a condo building collapsed in the Miami Beach area earlier this summer, killing 98, it shocked the nation. Here's what we know about what happened.
Read more

Dutchess County executive Marc Molinaro on Tuesday strode out of a cornfield on a farm near Rhinebeck to cheers, praise and goats bleating...
Read more

The House Republican encouraged residents to get vaccinated, touting the safety and efficacy of the vaccines.
Read more

The plan aims to process and unload 3,500 additional cargo containers each night through the end of the year.
Read more

$1.2 million of cocaine found on Florida beach during...

This week, we’ve been celebrating World Princess Week with all new Disney Princess content, experiences and products that spotlight courage and kindness. If anyone knows a thing or two about putting these two themes into action, it would be our newest Disney …
Read more

Evacuation orders in South Lake Tahoe were lifted on Sunday as firefighters made headway in battling a wildfire.The Caldor fire, which spans the area surrounding South Lake Tahoe, has burned more...
Read more

Pegasus spyware seller: Blame our customers not us for...

NSO Group tells BBC News: "The finger-pointing should be at the customer."
Read more

The mayor of London says the mural is a "celebration of a team that have inspired our nation".
Read more

A police officer was wounded in a shooting at a high school in Knoxville, Tennessee, on Monday. Officials said the person who shot the officer, a student at Austin-East Magnet High School, died at the scene when police returned fire. CBS News' Nancy Chen repo…
Read more

NHS Grampian says the "extraordinary" reaction from the public was the reason for seeing restrictions in the region eased.
Read more

How an investigation of the Washington Football Team led...

Jon Gruden, who resigned as head coach of the Las Vegas Raiders following reports of homophobic, racist and misogynistic emails, was not even a target of the NFL investigation which led to his rapid downfall.
Read more

PolitiFact appears to be shielding President Biden and Vice President Harris from criticism over their past rhetoric expressing distrust in the coronavirus vaccine during the Trump administration.
Read more

Made in U.S.A. Reflation Trade Is One Export World...

The U.S. bond tantrum is sending a chill through indebted countries which have for years paid less to borrow more.
Read more

‘Sins of our past’: Officials apologize for campus shooting

The Benefit of Natural Immunity to Covid (Podcast)

A Fake World Has Been Created To Spin The...

This week, Will talks about how a pseudo-reality is being creating to spin the news and the start of the college football season.
Read more

Invincible on Amazon Prime Video is a violent but...

The United Nations is saying that countries' climate plans are expected to fall short of the goals of the Paris Agreement - which sought to limit the Earth's warming.Under that agreement, countri...
Read more

Fully vaccinated travellers returning to England and Wales from France will still have to quarantine from Monday.
Read more

Bush noted that the lives of Americans were "changed forever" in a speech given in the Shanksville, Pennsylvania on Saturday.
Read more

Mark Robinson: Government won’t give you the American dream,...

Volume continues to surge at UPS to start the...

A surge in the volume of deliveries that arrived with the start of the pandemic has not eased at UPS, where consolidated average daily volume jumped 14.3% in the first quarter
Read more

Rate the players in the Euro 2020 Group C match between Netherlands and Ukraine.
Read more

The shadowy figure at the top of Israel most-wanted list has repeatedly eluded attempts to kill him.
Read more

‘A peach of a man’ – Commentator Alastair Alexander...

A Torah was "desecrated" and other items were damaged in a burglary that occurred at The George Washington University's Tau Kappa Epsilon chapter house early Sunday morning, according to a ...
Read more

Health experts say "all necessary plans and protocols" are in place at the site in Stranraer.
Read more

Hate crime laws are inconsistent across the U.S., creating gaps in both enforcement and quantifying the issue, according to a report from civil rights groups released Wednesday....
Read more

‘Letting the walls down’: How remote therapy was a...

Remote therapy during the pandemic helped people with depression and anxiety keep their appointments. But there are concerns about privacy and access.
Read more

U.S. Representative Cori Bush, D-Mo., who was evicted three times and lived in her car with her two children before her career in politics, spent a sleepless night on the U.S. Capitol steps to protest the end on Saturday of a pandemic freeze on evictions.
Read more

Black Friday is coming, but will anything match up...

The LG CX OLED was a runaway success last year – but will we see savings anywhere near as good on 2021 screens?
Read more

Ronald Klain, the White House chief of staff, was criticized online late Thursday after he retweet a post from a Harvard professor that summed up our top economic issues as “high class problems.”
Read more

Google may cut pay of staff who work from home