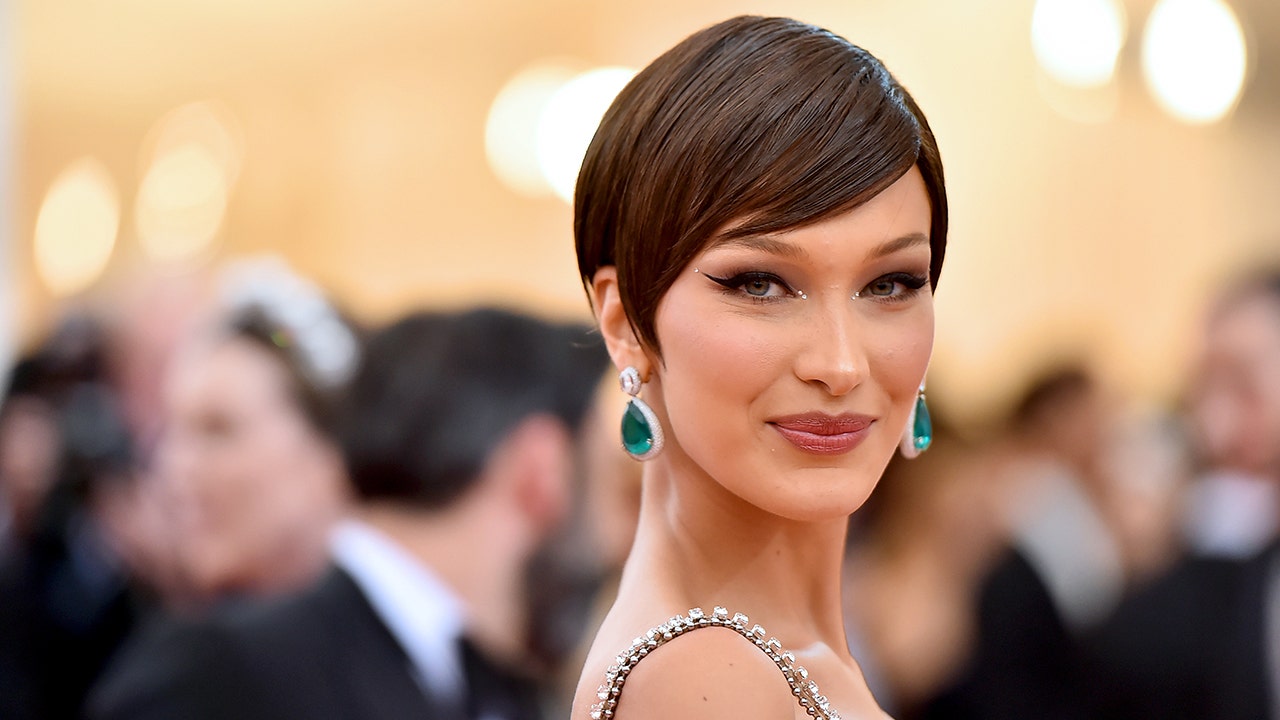 Bella Hadid is looking back on her time as a model.

The 24-year-old star appeared on the cover of Vogue’s September issue with several other young modeling stars and discussed what it was like for her when she kick-started her career.

Hadid first found success when she was just 17 and said that she found it difficult to balance a public persona with her own personality.

“Its like there were two Bellas me, this person in the process of figuring out who she was, and Bella Hadid the alter ego, who was, I dunno, a sexbot who goes out every night?” she explained.

Bella Hadid said that during her early modeling days, she felt that she had to project an image of a sexbot.

Hadid said that her “insane social anxiety” has turned her off from partying to maintain such an image.

” I felt enormous pressure to project that image because I assumed thats all people wanted from me,” she added. “Now I dont want to live in that box. I definitely feel like Im allowed to speak.”

Luckily, alongside her new self-empowerment, the model has found a way to express her emotions by writing poems.

“Its a way of getting at my emotions without it being total nonsense,” she explained.

Bella Hadid found success in the modeling industry at just 17. She is now 24.

Hadid is something of modeling royalty, as she’s the daughter of Yolanda Hadid who modeled around the world for several years before settling down with real estate developer Mohamed Hadid. Yolanda, 57, has since appeared on a number of reality shows including “Making a Model with Yolanda Hadid” and “The Real Housewives of Beverly Hills.”

Additionally, Bella’s 26-year-old sister Gigi is a model. The two have worked together on a number of occasions, even strutting down the runway in matching outfits.

Their brother, Anwar, 22, has also dipped his toe into the modeling game. Last year he appeared in his girlfriend Dua Lipa’s music video for a remix of the song “Levitating” featuring Madonna and Missy Elliott.

US officials warn of possible threats to the US...

Federal officials are on high alert for threats to the homeland following the mass evacuation from Afghanistan and devastating attack in Kabul this week that killed US service members and scores of Afghans.
Read more

Oppo is set to introduce a new band called Band Style which features a continuous SpO2 monitor along with sleep and general fitness tracking.
Read more

Sign up to our Next Africa newsletter and follow Bloomberg Africa on Twitter South African President Cyril Ramaphosa will address the nation Sunday to...
Read more

Instagram says its ranking system had a "bigger impact than expected" on some types of posts.
Read more

Joy for UK pubs and hugs tempered by rise...

Pubs and restaurants across much of the U.K. are opening for indoor service for the first time since early January even as the prime minister urged people to be cautious amid the spread of a more contagious COVID-19 variant
Read more

Arsenal boss Mikel Arteta praises his side's "intelligence" and "quality" during their 3-0 win over Sheffield United and says they put in a "really strong performance".
Read more

The Big, Bad and Ugly of Australia’s Boys’ Club...

G’day from Sydney. In this week’s dispatch, we look at the surprising shortfall in female corporate achievement, resort-level accommodation for mine workers and an earlier timeline for when Australians can travel again.
Read more

PM approached me to help sort out Brexit –...

China's mission to the European Union urged NATO on Tuesday to stop exaggerating the "China threat theory" after the group's leaders warned that the country presents "systemic challenges".
Read more

U.S. to Back Waiver of Vaccine IP Protections at...

The U.S. will support a proposal to waive intellectual-property protections for Covid-19 vaccines, joining an effort to increase global supply and access to the life-saving shots as the gap between rich and poor nations widens.
Read more

The facility in Campbeltown has already helped in the transfer of 19 patients since it became operational.
Read more

Amsterdam capped a month of events commemorating the 25th anniversary of its first Gay Pride festival with a "Pride Walk" through the city's historic centre on Saturday that drew around 10,000 participants carrying flags and an enormous rainbow banner.
Read more

Mary Trump, former President Trump's niece, is set to join the board of an organization that supports LGBTQ+ and female candidates running for office.Trump says that her decision to join LPAC, which is an organizat...
Read more

Marvel’s What If…? star Jeffrey Wright talks voicing the...

The Capitol Police Board, the oversight body supervising security on the Hill, has approved plans to begin removing the remaining temporary fencing around the Capitol.
Read more

Gauff withdrew from the Tokyo Olympics, which begin this week.
Read more

Whitmer’s campaign may have to return or donate millions...

Gov. Gretchen Whitmer’s reelection campaign may have to return or donate over $3 million identified as excess contributions after a lawsuit brought by the state’s Republican Party.
Read more

Hosted by Jane Pauley. In our cover story, Luke Burbank examines the difficulties facing farmers in finding farm workers. Plus: John Dickerson visits with Stephen Colbert on the night the "Late Show" host returned to performing in front of a full audience; Hu…
Read more

Old problems emerge ahead of the start of 2020 World Cup qualifiers, but will there be any surprises in Steve Clarke's Scotland squad?
Read more

Green Party to file for recount in Wisconsin

The Green Party announced plans Friday to file for recount in Wisconsin over concerns about hacked systems.
Read more

Over the weekend, a group of senators reached an agreement on a $1 trillion bipartisan infrastructure package and many on Capitol Hill are hoping to vote this bill through before leaving Washington for their scheduled August recess. With the infrastructure bi…
Read more

WATCH: Crowd climbs walkway to plane in effort to...

A crowd desperate to evacuate climbed the walkway to a Kam Air plane, one of many chaotic scenes at the Kabul airport as the Taliban made rapid advances in the city.
Read more

About 430 more beds will be added after a football and cricket stadium is converted into a hospital for COVID-19 patients. The Royal Global University in the Assam state capital of Gauhati will add 1,000 beds.
Read more

GOP lawmakers split over mandatory vaccines for US military...

Lawmakers are torn over reports that U.S. Army members may soon be required to receive COVID-19 vaccinations.
Read more

‘I Am Bisexual’: Amber Opens Up About Her Sexual...

Amber opened up about her sexual orientation during 'Teen Mom OG.'
Read more

Biden praises Harris for ‘great job’ on border despite...

President Biden backed Vice President Kamala Harris Thursday ahead of her trip to the US-Mexico border, telling reporters his besieged second-in-command has “done a great job so far” on the issue despite waiting more than three months to visit the beleaguered…
Read more

Rep. Liz Cheney's campaign (R-Wyo.) has spent thousands of dollars on private security this year following death threats in the wake of her decision to back the impeachment of former President Trump and her subsequent rem...
Read more

An unvaccinated worker at an assisted living facility in Oregon prompted a COVID-19 outbreak that infected 64 people and killed five, the Register-Guard reported.
Read more

Putting out music in a pandemic, without the ability to connect directly with fans through touring, felt sort of like a tree falling in the forest with no one around to hear it
Read more

Covid-19: When will booster jabs be available in the...

US regulators may give approval for a third Pfizer jab at a highly-anticipated meeting on Friday.
Read more

What are TCL phones&quest; A brief overview of the...

Here’s what you need to know about Chinese phone brand TCL, including what phones and other devices it makes, and the markets it sells to.
Read more

South Carolina Rep. Trey Gowdy, the chairman of the House Select Committee investigating Benghazi, tells Hillary Clinton in his opening statement that the probe is not singularly focused on the former secretary of state
Read more

Almost half of federal cases against Portland rioters have...

Federal prosecutors in Portland, Ore., have moved to dismiss almost half the cases they charged in connection with violence accompanying last year’s protests over racial injustice, as authorities grapple with how to tamp down politically motivated unrest that…
Read more

Realme Band 2, Realme Narzo 50 series, and Realme 32 Neo smart TV will be launched in India next week. Here is what we know so far.
Read more

For many high school students this week marks the first full-time return to classrooms since before Christmas.
Read more

President Biden and his team have tripled down on the claim that his Build Back Better agenda "costs zero dollars" despite loud condemnations from The Washington Post fact-checker, budget analysts and at least one columnist who supports the infrastructure bil…
Read more

Netflix's Avatar: The Last Airbender casts its Aang, and reveals who'll be behind-the-scenes on the series.
Read more

This is the last American soldier to leave Afghanistan

Major General Chris Donahue, commander of the U.S. Army 82nd Airborne Division, XVIII Airborne Corps, was one of the commanders on the ground running the evacuation mission.
Read more

Air Link Communication Ltd. plans to raise at least 5.85 billion rupees ($36 million) through an initial public offering this month, which would be the largest from a non-state firm in Pakistan.
Read more

Family of inmate who died after being pepper sprayed...

The mother of a 35-year-old Black man who died last year after being pepper sprayed in a federal prison in Brooklyn is suing the government and unnamed correctional officers for wrongful death, according to court documents.
Read more

Covid-19 infections have continued to increase "exponentially" among children across the US, and now account for nearly 26% of all cases reported nationwide, according to data published Monday.
Read more

Virginia wide receiver Dontayvion Wicks made one of the most ridiculous touchdown catches in college football this season on Thursday night in an ACC matchup against Miami.
Read more

Should I buy a laser TV&quest;

Laser TVs are a relatively new segment of the AV market, but should you pay Hisense's TV-projector hybrid any mind?
Read more

The White House is delaying the release of its top line spending request for the 2022 fiscal year, further putting off the start of the annual process of funding the government despite earlier indications that the proposal would be released this week.
Read more

Two Turkish soldiers were killed and two others were wounded in an attack in northern Syria, Turkey said late Saturday.
Read more

The weekend oil leak along the Southern California coast happened not far from the site of the catastrophe more than a generation ago that helped give rise to the modern environmental movement itself: the 1969 Santa Barbara oil spill
Read more

Oculus is getting into AR, and it has big repercussions for the future direction of the company and its popular line of VR headsets – especially the eventual Oculus Quest 3.
Read more

A new report recommends that the federal government prioritize plans to enact stronger transparency requirements and other measures for tech platforms in an effort to combat polarization on social media.The report released Monday...
Read more

After a divisive convention process, Youngkin will look to be the first GOP governor in the state since 2009.
Read more

Getting more black women into cycling