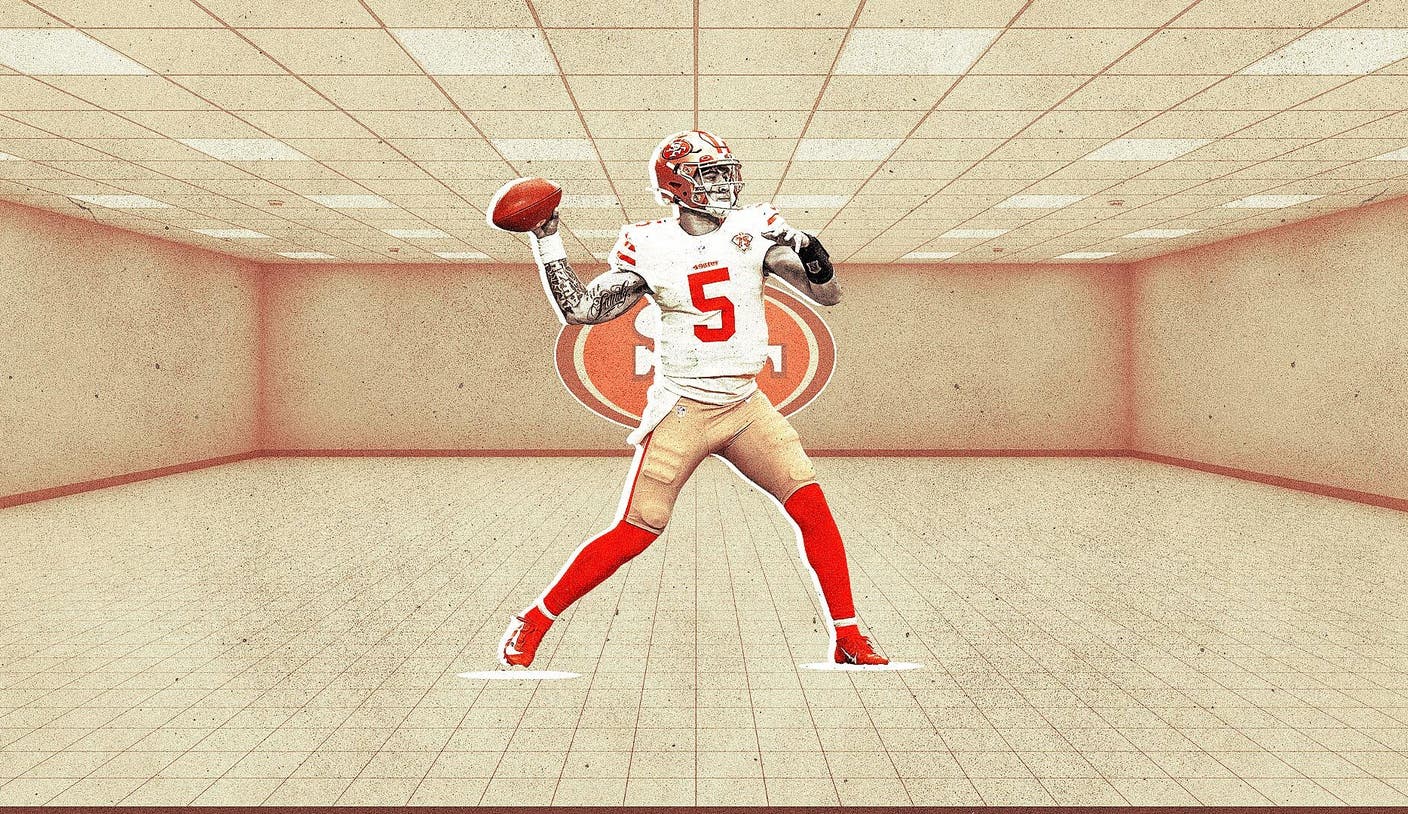 Jimmy Garoppolo out, Trey Lance in.

And with the switch being official, the hype around the San Francisco 49ers second-year quarterback, with just two starts under his belt, is at an all-time high.

Current players like third-year wide receiver Brandon Aiyuk and Pro Bowler Deebo Samuel, and former 49er greats like Jerry Rice and Steve Young, have heaped praise on Lance before the season has even begun.

This week, Aiyuk said that with Lance under center, the 49er offense is “going to be a little bit more explosive,” and earlier this offseason, Samuel said, “I think Trey will be a superstar in this league.”

Last month, Rice said “the sky’s the limit” for Lance.

Nick Wright appears to be sold on the future QB of the 49ers, too, as he explained on Friday’s “First Things First.”

“This Niners team is ready to win right now,” Wright said. “Do we expect the Niners to make the playoffs? Yes. Do we expect Trey Lance to get better as the year moves on? Yes. Do we know the Niners are good enough to make a playoff run with mediocre, if not below-average, quarterback play? Yes.

“So, once you’re in the Super Bowl, which the 49ers absolutely could be, could Trey Lance have a great Super Bowl? Of course, he could.”

Wright pointed out that Lance could easily have the same type of season that Colin Kaepernick had with San Francisco when he led them to a berth in Super Bowl XLVII, after taking over for a steady, veteran quarterback in Alex Smith.

Not to mention, both Lance and Kaepernick are dual-threat QBs.

However, Chris Broussard isn’t as convinced when it comes to the unproven 22-year-old.

“Call me crazy for being skeptical that a guy who played football at North Dakota State a few years ago and has only played [two games] his last year will step right into the NFL, in his first year as a starter, and be terrific,” Broussard said. “I just don’t see it.”

San Francisco QB coach Brian Griese said this week that Lance has shown a maturity early in training camp that he believes will carry him a long way.

“He gives himself a chance because he shows up every day, and he’s ready to work,” Griese said. “He has a humility about him that gives him a chance to learn from his mistakes and grow. I’ve been really encouraged about his demeanor.”

Lance is 1-1 as a starter and in those games. In six total appearances, he’s thrown for 603 yards, five touchdowns and two interceptions, completing 57.7% of his passes. Trump says “I may have to run again” in CPAC speech

Energy bills: What do I do if I can’t pay?

On The Money — Labor market flashes strength ahead...

Return to the office begins as restrictions axed

Mother of Texas gunman says son was ‘not a...

China puts therapists on trial for sedition over children’s...

UK’s Johnson: What Putin has done in Ukraine is...

Why Vladimir Putin will fall

The Mighty Ducks: Game Changers has found a new...

Bipartisan group of Senators press Mayorkas on US readiness...

Senate to get Ukraine, Russia briefing on Thursday

Key ECB rate should be back in positive territory...

Germany to Restrict Restaurant Access to Rein in Omicron’s...

Will Smith apologizes for slapping Chris Rock at the...

The home teams and the vax mandate

Gowdy: The real meaning behind Biden’s pledge to nominate...

Ukraine war recasts ‘Navalny’ as a prequel to Putin’s...

Sen. Ted Cruz is in a fight with Elmo...

Japan PM: Deal reached on US military curbs to...

Nancy Pelosi slammed over so-called 'connection' with China: 'We are truly led...

Panthers won't decide between Sam Darnold, Baker Mayfield as QB1 for at...