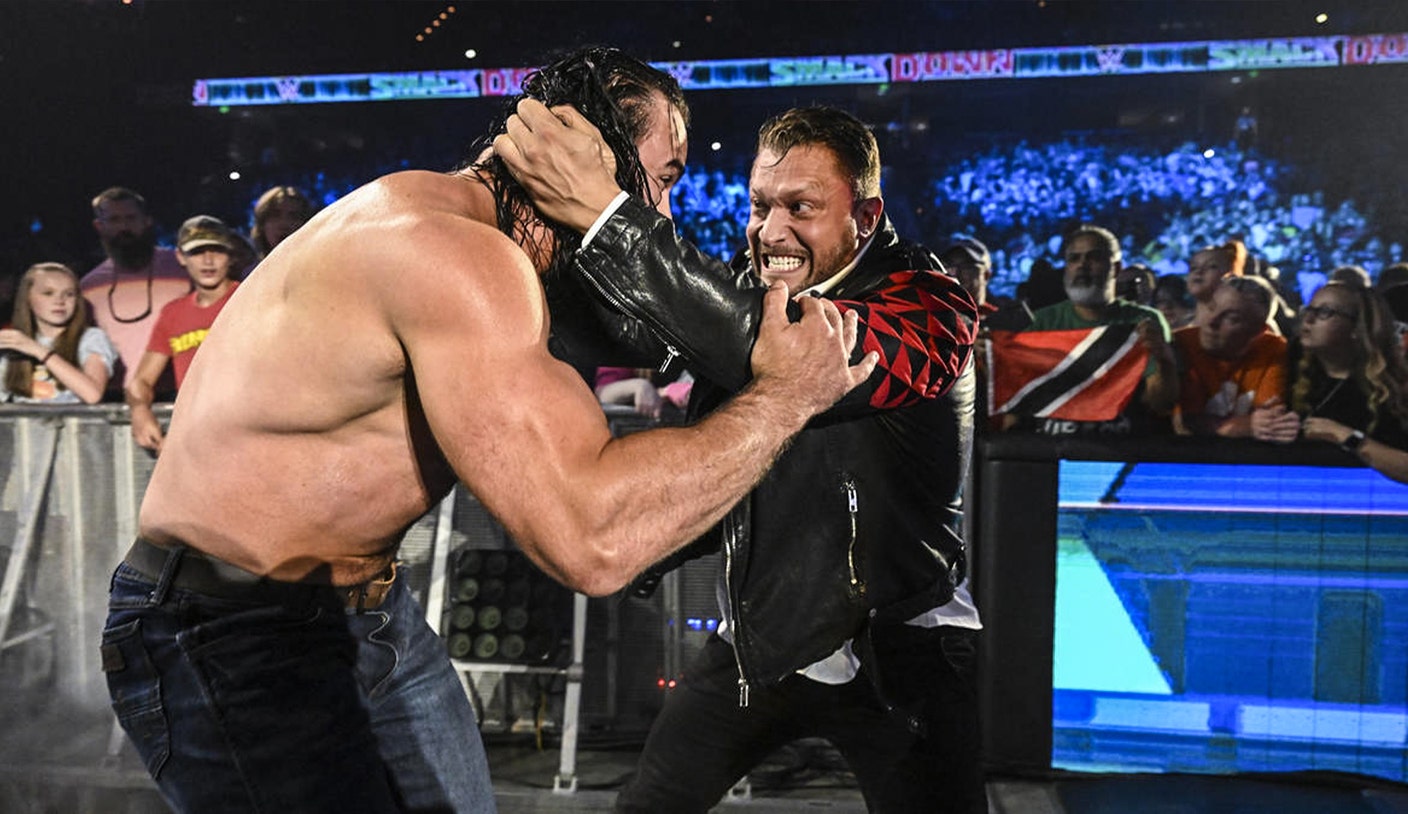 Karrion Kross surprised the wrestling world with a return to WWE on SmackDown and he had a message for Roman Reigns.

First, heres a rundown of the match results:

The Viking Raiders won a Squash match over local talent

Moment of the night: Karrion Kross and Scarlett are back

Another huge coup at the start of the Triple H era.

Kross and Scarlett never shouldve been released in the first place.

Even with an initial disastrous debut that was out of his control, Karrion Kross still oozes credibility and demands attention on-screen. He’s someone you can build an entire brand around.

The way he was brought out on SmackDown this week is a much better way to make that happen.

Attacking Drew McIntyre and sending a message to Roman Reigns with the hourglass made you forget about the silly outfit from last year and instead focus on the fact that he’s a monster.

Moves such as this from Triple H are creating excitement around the product again and regaining trust from the fanbase. Kudos all around.

Match of the night: Ricochet vs. Happy Corbin

Ricochet is one of the most impressive wrestlers in the world. A possible renewed push on the horizon gives me hope in his WWE future.

A win over Happy Corbin, even due to distraction from McAfee, is a step in the right direction.

Hopefully he can continue to rack up meaningful wins again.

WWE announced that starting on Raw this week, there will be a tournament to crown new Womens Tag Team champions.

No teams have been announced yet, and its unclear at this time where the situation stands between WWE and former champs Sasha Banks/Naomi.

Shayna Baszler earning a title shot at Clash of the Castle was another W for fans of NXT 1.0 watching the show.

Kross, Ricochet and Baszler all had great runs in NXT when it was run by Triple H. The possibility of similar positioning in WWE with “The Game” as head of creative is very promising.

As for Shayna and Liv, Im looking forward to seeing how Ronda Rousey factors into the story.

Will the former champion help her friend? Or will she be more focused on regaining the title herself? Time will tell.

For a segment-by-segment breakdown of the show, listen to the SmackDown Roundup podcast in the “Out of Character” feed on Apple Podcasts or Spotify.

Dont forget to follow all your favorite WWE Superstars and shows in the FOX Sports app to receive alerts on what theyre doing and more! How a Russian invasion of Ukraine could affect the...

Student’s cause of death revealed as questions remain about...

Energy bills: ‘Trapped in a home I couldn’t afford...

UK heatwave: Parents urged to keep children out of...

Guy Reffitt: Capitol rioter turned in by son gets...

Watters asks why FBI, big tech did not have...

Strikes Would Push Royal Mail Into a Loss: The...

White House warns protesters: Justices ‘must be able’ to...

FA Cup quiz: Can you name every winning captain...

EXPLAINER: Why were Japanese abducted by North Korea?

Smaller Reactors May Still Have a Big Nuclear Waste...

Kamala Harris caught in word salad when asked if...

Dog walker attacked after argument with golfers at Johnstone...

Timed Teaser: What happened to the Eurovision trophy?

University revokes honorary degrees given to Giuliani and Flynn

Erdogan to meet with leaders of Sweden, Finland before...

China to appoint Horn of Africa envoy amid Ethiopia...

Scotland v England: What does Gregor Townsend’s side need...

Ukrainian unit digs in for Russian assault on eastern city