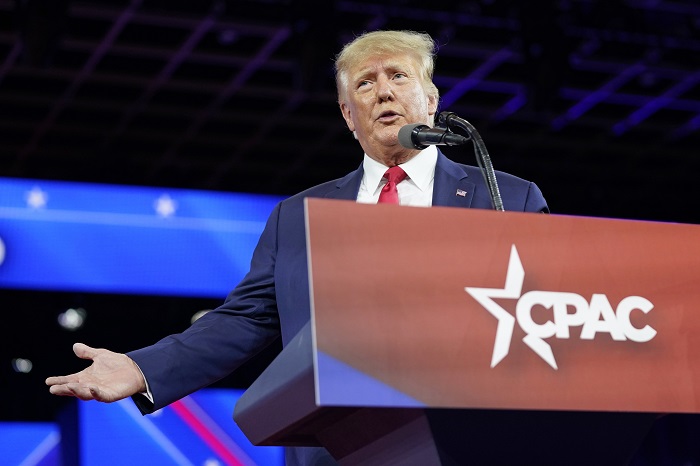 Unlike CPACs Orlando event in February and the Faith & Freedom Coalitions Nashville conference in June the weekend gathering was missing most of the non-Trump names floated as potential 2024 contenders, though Sens. Rick Scott (R-Fla.) and Ted Cruz (R-Texas) were among the elected officials who spoke.

And while Trumps dominant standing in the GOP has never been under greater threat from a rising crop of ambitious Republicans, the event highlighted his continued pull with the partys activists. A straw poll survey of CPAC Texas attendees 2024 preferences showed Trump leading with 69 percent support, 10 percentage points higher than his showing at the February gathering in Florida. DeSantis came in second place with 23 percent.

Trumps approval rating among attendees was at 99 percent. Poll methodology, including the survey size and margin of error, were not provided.

McLaughlin argued that the response from the gathering proved Trumps influence is not waning.

Matter of fact, whats happening is hes more popular than ever, McLaughlin said.

Yet while straw polls at other gatherings of conservative activists have also showed that Trump would start a 2024 primary campaign with a strong lead, recent polling of the broader GOP electorate has told a slightly different story.

A Siena College/New York Times poll conducted last month showed the former president with support from just under half of Republican primary voters in a matchup with several other candidates. Trump led with 49 percent of the vote, followed by DeSantis with 25 percent.

In a separate poll question removing Trump as an option for 2024, 59 percent of CPAC Texas attendees supported DeSantis for president, followed by 8 percent for Donald Trump Jr.

Not only were other top potential 2024 rivals absent from the conference, throughout the three-day gathering, there was little talk of them. Speakers instead focused squarely on Trump, largely not mentioning DeSantis or others as top leaders in the party.

The loudest voices spreading baseless claims of election fraud in 2020 claims that have repeatedly been disproven in audits, official investigations and litigation shied away from discussing Pence, even to criticize him.

Steve Bannon, the former Trump campaign and White House strategist who was convicted this week of contempt of Congress, outlined at the conference a vision for the coming years of the GOP. That included more candidates like Kari Lake, who won the Republican gubernatorial nomination in Arizona this week after basing her campaign on disproven claims of election fraud. And, of course, it included Trump with a second term in office.

In 2024, we can actually get a Senate thats filibuster-proof. And the return of Donald J. Trump to the White House.

Bannon, who was recently found guilty on two counts of refusing to cooperate with the House committee investigating the Jan. 6 attack on the Capitol, riled up the crowd by suggesting outside forces were attempting to jail Trump in an effort to keep him from seeking the White House again.

President Joe Biden won the 2020 election by flipping five states Trump carried in 2016 and outstripping him nationally by 7 million votes.

In a statement to POLITICO after the straw poll, American Conservative Union chair Matt Schlapp referred to Trumps enduring prominence with conservatives.

Theres an unbreakable bond between President Trump and the conservative movement, Schlapp said. He simply did the things he promised to do and for that they are forever grateful.

On stage Saturday, British commentator and former Brexit Party leader Nigel Farage told the crowd Trump looks like he is ready for another run.

Farage, who has visited with Trump recently, told the CPAC audience that the former president appears to have lost 20 pounds since leaving office.

The weight of the world is coming off his shoulders, Farage said. His nominees are winning the primaries, and I believe Donald Trump is the man to go out there and fight on behalf of America and the Western world.

Scott, the Florida senator whose 12-point Plan for America and corresponding ad campaign has been construed as a sign hes laying the groundwork for a presidential run, got the most resounding applause of his speech when he called for a border wall to be named after President Donald J. Trump. Steve Hilton calls out Biden: Has there ever been...

Covid in Pregnancy Linked to Stillbirths and Newborn Deaths,...

Craft breweries are starting to shut down due to...

Climate change will make it hard to predict the...

Daunte Wright’s mother was approached and grabbed by police...

How to watch Euphoria season 2 online where you...

Treaty United: How to build a squad in three...

Is your body ready for workout or needs rest?...

The all-new AirPods Pro are discounted down to just...

“Butcher of the Andes” victims laid to rest decades...

Ukraine keeps up counterattack to north of Kharkiv, Britain...

An American Imprisoned Overseas: His Wife Pleads For His Freedom