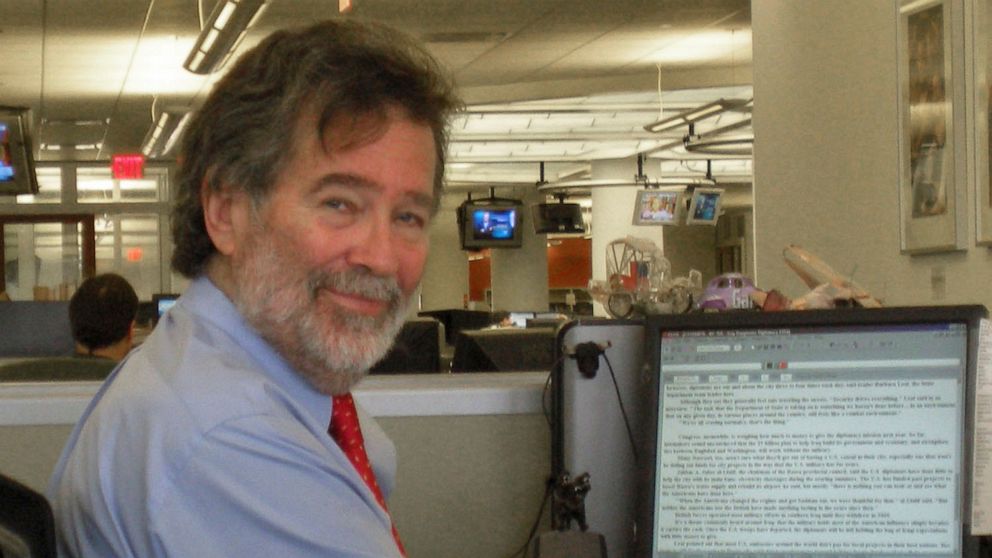 He had been diagnosed with Alzheimers disease, developed pneumonia earlier this week at a nursing home, and died on Friday in a New York hospital, his family said.

From Israel and the 1967 Six-Day War to apartheid-era South Africa and on to Afghan battlegrounds, bloody Belfast, the Iron Curtains fall, the handover of Hong Kong and countless other datelines and stories, Eliason witnessed and reported on some of the great world events of the 20th centurys final decades. And when that century drew to a close, it was the Eliason touch that greeted the new one.

From East to West and North to South, the world welcomed the new millennium in a shimmering tapestry of song and light that rippled around the globe, he led off APs main article on January 1, 2000.

By then he had moved on to his final posting, from which he retired in 2014, as a New York-based editor of some of AP’s biggest stories and projects and, finally, as chief editor for international feature stories, a valued guiding hand for scores of AP reporters worldwide.

A classic AP go-to guy is gone, said former AP President and CEO Louis D. Boccardi. Even a quick look at the outline of his assignments, both abroad and here at home, says it all. If there was a tough assignment that needed a steady hand, Marcus was often the choice.

Jack Marcus Eliason was born on Oct. 19, 1946 to Jewish immigrant parents from Europe and grew up in Bulawayo, Rhodesia. At age 20, after a brief apprenticeship at The Jerusalem Post in Israel, Eliason joined the AP bureau in Tel Aviv as a messenger and trainee puncher, or operator of the Telex machine used to transmit stories.

A month later, on June 6, 1967, the Arab-Israeli conflict known as the Six-Day War broke out. When the new hire arrived at work and was chastised for not rushing in earlier, he told of having to buy emergency groceries for his mother, dig a backyard bomb shelter, pick up stranded hitchhikers, and so on.

Dont stand there talking about it, kid, an old hand growled. Write it down.

He did, launching a sterling career in news and being promoted to staff reporter a year later. Once asked how he learned to write so well, he replied, By punching the great copy of journalists in the AP bureau in Tel Aviv.

Through the 1970s, the Eliason byline topped some of the biggest stories from the Middle East: terror attacks and Israeli government turmoil, another Arab-Israeli war, Anwar Sadats history-making 1977 visit to Jerusalem.

Anwar Sadat, president of Egypt, had landed in Israel on a mission of peace. The time was 7:59 p.m., Saturday, Nov. 19, he reported. For Israelis, and doubtlessly for Egyptians, too, it was more stupendous than Neil Armstrongs foot touching the moon.

In 1978, Eliason was posted to the AP bureau in Paris, where among many other assignments he covered the exiled Ayatollah Ruhollah Khomeini as he led, from afar, the Islamist revolution in Iran.

After a stint back in Israel, Eliason transferred to London, where he rose to news editor. His astute reporting and masterful prose stood out in one of APs premier writing bureaus, whether covering the bloodshed of the Troubles in Northern Ireland or having fun with British eccentrics like the worlds worst poet, William McGonagall.

Scotland does its poets proud, and no town is without its statue to Robert Burns, Sir Walter Scott or Robert Louis Stevenson, Eliason wrote from Dundee. But mention The Great McGonagall in his hometown and reactions range from a fond chuckle to pained silence.

He next returned to Israel, this time as chief of bureau, leading a staff of prize-winning reporters and photojournalists in the 1990s, overseeing the nonstop flow of news of Palestinian uprisings, intermittent Arab-Israeli peace talks, Israeli political battles and Scud missile attacks from Saddam Hussein’s Iraq. From there, he moved on to his final international assignment, in Hong Kong, where he ran coverage of the 1997 handover of the British colony to Chinese control, writing all the while.

Throughout the decades, the AP also tapped the talents of the big, gregarious Israeli with the South African accent a high school graduate whose insatiable reading and store of knowledge often amazed colleagues for temporary assignments in some of the worlds hottest spots, on some of the eras most important stories.

He reported from Afghanistan after the Soviet invasion of that country in 1979 and from his southern African homeland during the worst of its anti-apartheid upheavals. After the fall of the Berlin Wall in 1989, the AP dispatched Eliason to travel along the former Iron Curtain border to interview ordinary citizens and write an in-depth report on the meaning of that epic chapter of 20th-century history.

In 1997, he left Hong Kong for AP headquarters in New York and a job as lead editor for feature articles from around the world, an acknowledged master becoming an understanding mentor for a cadre of younger foreign correspondents, from Beijing to Berlin to Buenos Aires.

He was one of those journalism heroes I had as a young writer those fascinating, unattainable bylines, said one of those correspondents, Ted Anthony, now AP’s director of new storytelling and newsroom innovation. Then he became the greatest editor Ive ever had, an astonishing mix of encourager and enforcer. And a dear friend.

When he retired after 47 unbroken years with the AP, Eliason remarked that Im a guy who has worked all his life. No fellowships, no sabbaticals, no parental leaves. I was having way too much excitement for that.

Leaving his desk for the last time, he heard the vast AP New York newsroom burst into applause. It was a gracious, spontaneous gesture that reminded me once again how lucky I have been, he later wrote. Said Boccardi: It was the AP that was lucky.”

Eliason is survived by his wife, Eva, a daughter, Avital, and a son, David.

Charles J. Hanley was a writer and editor for The Associated Press from 1968 to 2011.

War in Ukraine: Thousands of pro-Russia Serbs march in...

Feeling ‘hangry’ may be rooted in science and not...

Panasonic Lumix GH6 is a video monster that’s half...

Jhené Aiko is pregnant and ‘overjoyed’ to be expecting...

Obstacle racing to be tested as equestrian replacement in...

Turning up the volume on the independence debate

Nadya Karpova: The Russia striker speaking out against war...

‘Dollar Ate My Profit’ Is Corporate America’s Lament Once...

Narrowing Options in the Ukraine Crisis

Traveling to Las Vegas during Covid-19: What you need...

Amazon Watches Its Workers and Waits for Them to...

Attack on worshipers in a New Jersey mosque is being investigated as...