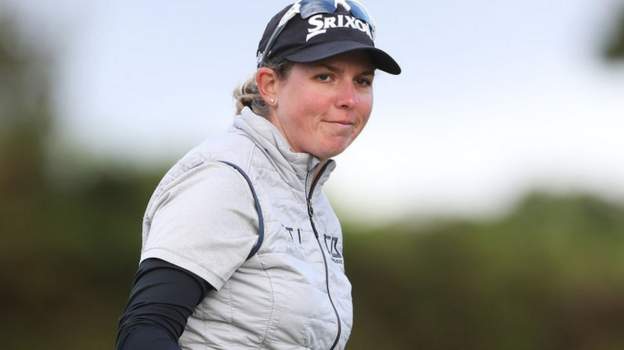 Buhai, 33, is on 14 under after her third round, which included eight birdies and a bogey at the 18th.

South Korea’s three-time major winner In Gee Chun, who led overnight by a shot, carded a 70 to sit at nine under.

Japan’s Hinako Shibuno, the 2019 champion, is alongside Chun after her five-under 66.

Chun’s compatriot Inbee Park – the 2015 Women’s Open champion – is on seven under, as is Sweden’s Madelene Sagstrom – the 2021 Women’s Open runner-up.

But British hopes have faded at Muirfield – England’s Charley Hull is at three under while compatriots Mel Reid and Jodi Ewart Shadoff are two under, as is Ireland’s Leona Maguire.

England’s Georgia Hall is one under and Scotland’s Louise Duncan has slipped back to one over.

Buhai is ranked 84th in the world and her best ever finish in a major is fifth at the 2019 Women’s Open at Woburn.

Asked if she has ever played better than Saturday, she replied, “Probably not”.

“I think about when we played at Woburn a couple years ago,” she added.

“I shot 64 or 65 and I remember that being a really good day. I think I’m most proud of the way I was just focused and calm, and that’s all I try to control. I wasn’t thinking of the outcome.”

Speaking about her round, Chun said: “It was not easy and it was a bit windy out there. I think my game was really good today.

“So I had two bogeys but golf is not always easy. I think it was another good experience with the big wind out there.” UC agrees to another major settlement over sexual abuse

Ukraine star Karol in Japan, says her country will...

Alabama fugitive threatened to kill ex if he escaped,...

After a rocket: ‘One second and you are left...

Fed committed to getting inflation to 2% target, Barkin...

At Long Last, Covid Vaccines for the Youngest Kids

Biden calls out Republicans for not supporting China competition...

After decades in prison, California man innocent of murder

Eileen Gu is the poster child for a new...

Texas shooting: How false rumours spread that gunman was...

Queen’s Aides Involved in Committee That Stripped Harry of...

OnePlus 10 Ultra could be even more powerful than...

Dan Darling on Abortion Polls and What they Actually...

GOP plots onslaught of Biden probes in the run-up...

Is your body ready for workout or needs rest?...

Meet the legal team behind the Johnny Depp defamation...

Oklahoma revenue collection is up 15% from last fiscal...