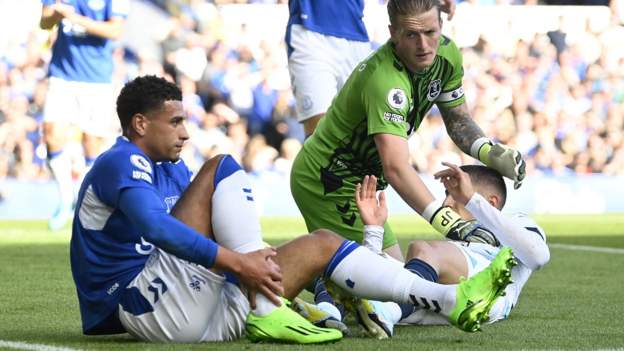 Everton defender Ben Godfrey has been taken to hospital to have a lower leg injury assessed which he suffered in Saturday’s defeat by Chelsea.

Godfrey, 24, sustained the injury in the 10th minute after tackling Kai Havertz, who was through on goal.

He received treatment for eight minutes before being stretchered off.

Everton also lost centre-back Yerry Mina to injury in the second half, with the Colombian seen clutching his leg after an innocuous incident.

Chelsea won the game 1-0 with Jorginho’s first-half penalty the difference.

Meet the woman who has spent decades collecting plastic...

It’s now easier than ever for hackers to abuse...

Bulgaria protests decision to free ex-PM with no charges

UK heatwave: From giving birth to working in a...

Riot Games will listen in on your voice chats....

Shaun White retires from Olympic competition: ‘This has been...

Novak Djokovic: Australia’s treatment of world number one is...

Is Bird Flu Dangerous to Humans? What We Know...

DeSantis asks students in viral clip to take off...

NYC subway safety plan gets going after a violent...

No reported damage in Philippines from Chinese rocket debris

With 100 days to the midterms, Democrats try to...

Trump to be deposed as soon as Wednesday in...

What should I do if my luggage is delayed, lost or damaged?