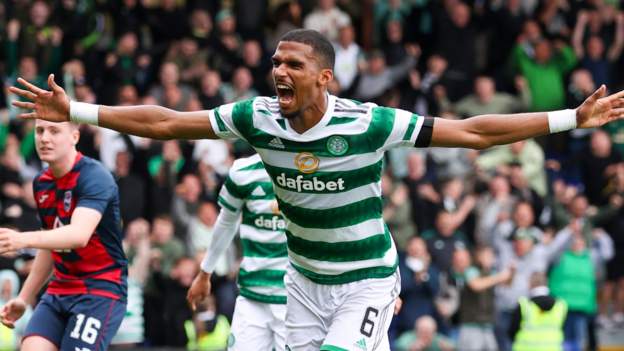 Moritz Jenz celebrates his winning goal on his debut

Moritz Jenz rescued Celtic with a late goal on his debut as the Scottish Premiership champions rallied to overcome impressive Ross County.

Kyogo Furuhashi rewarded the visitors’ heavy pressure when he converted Jota’s cutback shortly after the interval.

For all their 83% possession in the first half, Celtic failed to find a breakthrough as County provided stout resistance.

Kyogo and Jota combined well on the edge of the box to set up the former for a shot that was saved well by the County goalkeeper.

As the half drew to a close, Celtic’s frustration grew as Matt O’Riley had a chance blocked by an exceptional sliding challenge from Baldwin and Maeda forced Laidlaw into a reflex save.

The game burst to life within minutes of the restart as Callum McGregor played a weighted pass to Jota, who took an intelligent touch past a defender before picking out Kyogo in front of goal for a simple finish.

The goal seemed to intensify County’s endeavour, as they enjoyed decent attacking possession before Iacovitti bulleted home an Edwards corner just short of the hour.

Celtic toiled in search of a second goal until centre-back Jenz glanced a header home from a terrific Jota cross to send the travelling support wild.

Intricate play on the edge of the area allowed Abada to finish off an impressive attacking move with a curling effort in injury time to guarantee all three points.

Man of the match – Jota

As much as Ross County frustrated the away side, the Portuguese winger recorded three assists and was instrumental in victory

No cause for County concern

Ross County have zero points from a possible six, but they still have more than enough potential to be a surprise package this season.

An impressive attacking display on the opening weekend and a solid defensive performance this afternoon will give Malky Mackay more than enough encouragement as the season gets going.

For Celtic, what a coup Jota’s signing is. The winger, who shone on loan last season before returning on a permanent deal this summer, notched three assists in another inspirational display.

A potential downside for Ange Postecoglou will be how frustrated his side were in the opening 45 minutes. 82% possession, 339 passes, 112 in the final third, yet only three shots on target.

The strength in depth of his bench, though, proved crucial with Abada making an impact after his half-time introduction.

Ross County are away to St Mirren on Saturday 13 August (15:00 BST), while Celtic are away to Kilmarnock the following day at noon. Can the world’s largest plane ever fly again?

Chicago mayor: Teachers union made us a ‘laughingstock’

France goes to the polls as Macron battles left...

Six Nations: England stuck in transition as new side...

No word yet on new Russian company to operate...

Blinken in Thailand to shore up regional support, counter...

Zambia to Boost Tax Intake as It Targets Growth...

Biden frustrated with aides for walking back his statements,...

Here’s What Analysts Say Are Priorities for Philippines’ Marcos

The Cheshire Cat: A Golden Grin From Ear to...

Friday With Will & Pete