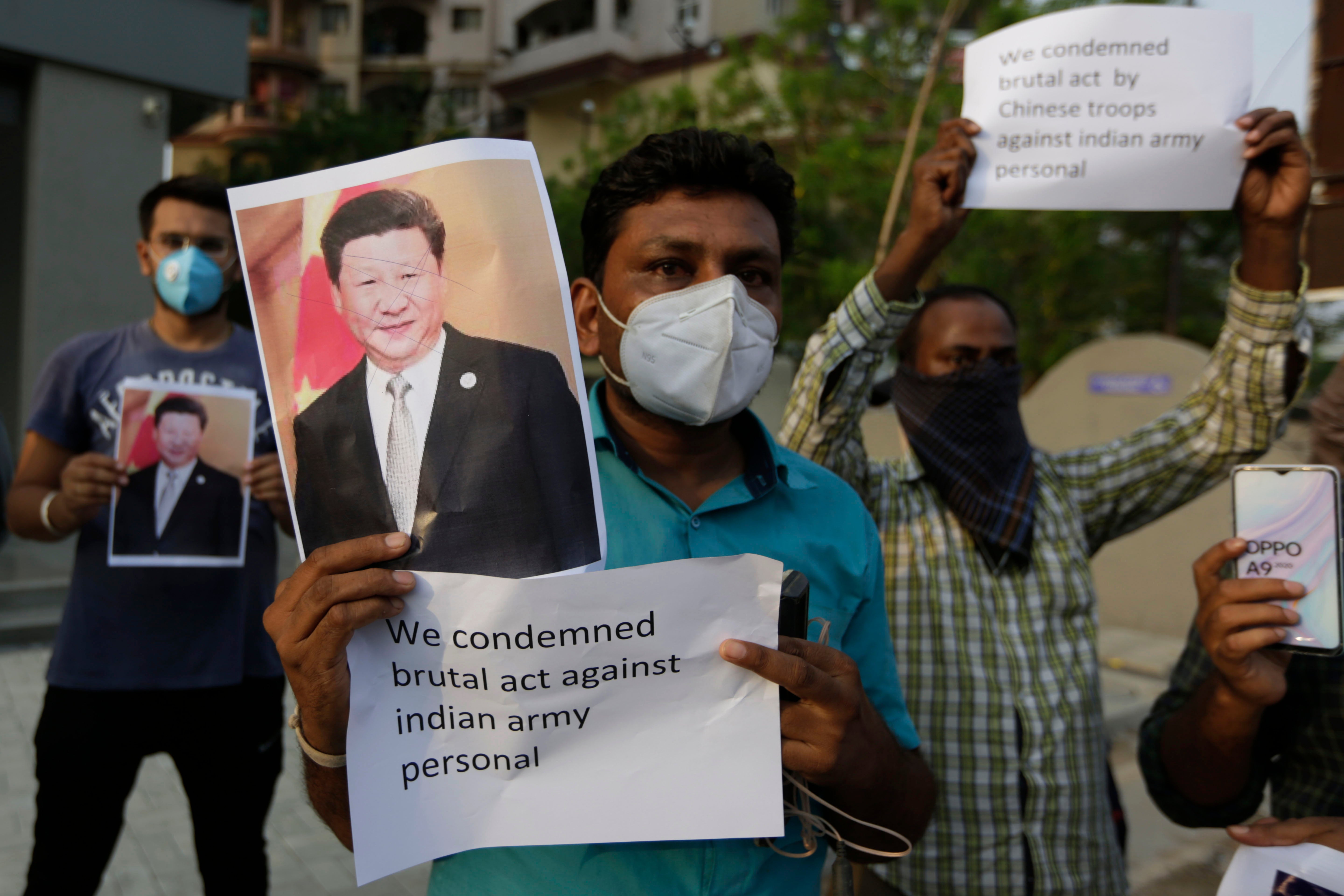 Two years ago, in below freezing temperatures and under the cover of darkness, Chinese soldiers crept through the high-altitude Galwan Valley. Armed with homemade weapons, including iron rods studded with spikes and wooden clubs wrapped with barbed wire, they attacked a contingent of Indian soldiers. The medieval, hand-to-hand combat lasted for six hours.

When the brutal melee was over, 20 Indian soldiers had been killed and, according to Indian media, over 40 Chinese PLA soldiers were dead. Though China has never officially released the number of its casualties, the event is considered to be the deadliest clash between the two nuclear neighbors since 1975.

A man holds a photograph of Chinese President Xi Jinping during a protest in Ahmedabad, India, June 16, 2020, after Indian soldiers were killed in a deadly border clash with Chinese forces. (AP Photo/Ajit Solanki)

Had both sides not respected the decades-long agreement banning the use of firearms along the contested border area referred to as the Line of Actual Control, the outcome both on the battlefield and the global stage could have been much worse.

In the aftermath of the attack, New Delhi issued an array of reprisals, including banning Chinese apps from the Indian app store. With India rapidly approaching 1 billion smartphone users, it was a significant blow to the Chinese tech community. It also served as a savvy national security move as it eroded Chinas ability to mine the personal and biometric data of Indias citizens.

For its part, the United States was quick to identify a means by which it could help strengthen its growing security partnership with India not via fighter jets and missile systems, but rather by providing a wide range of cold weather gear, allowing the Indian military to “overwinter” in the Galwan Valley, thereby hampering any future attempts by Beijing to violate and seize Indian sovereign territory uncontested.

Indians burn photographs of Chinese President Xi Jinping during a protest against the Chinese government in Jammu, India, June 2020. (AP)

Researching my thriller,”Rising Tiger,” I was shocked not only by the savagery of the Galwan Valley attack, but also by Chinas ongoing efforts to slip a proverbial noose around Indias neck through its salami-slicing, territorial incursions into Bhutan, the expansion of its sphere of influence via its Belt and Road initiative in Pakistan, and its network of commercial and military facilities across the Indian Ocean known as the String of Pearls.

India, as the worlds largest democracy, is a natural ally for the United States, the worlds oldest. From our supply chain (which is far too dependent on China) to military cooperation, there is much America can benefit from a formal alliance with India.

In fact, as Chinese economic and military expansionism continues to grow, now is the time to move beyond the Quadrilateral Security Dialogue of Australia, India, Japan and the United States, to a more robust, official organization.

Beijings ambitions are obvious for everyone to see. We need to invest our time and our gold accordingly. As the Indian proverb says, “Life is not a continuum of pleasant choices, but of inevitable problems that call for strength, determination, and hard work.” It is high time we, as a nation, get to work.

Brad Thor is the No. 1 New York Times bestselling author of 22 thrillers, including his latest, “Rising Tiger.” Simu Liu, Henry Golding and what it means to...

US tourist survives fall into Mount Vesuvius after reaching...

‘I am only the UK’s sixth black female QC’

Celebrity birthdays for the week of July 31-Aug. 6

Turkey’s Rate Pause Shapes Up as Stress Test for...

How to improve your digital front door with WebOps

I got married this week, and these five iOS...

Russia Says Ukraine Attacked a Site Over the Border

3 killed in shooting at Copenhagen mall

Biden to make ‘forceful’ push for voting rights in...

Bookstagram Is Fueling an Unnerving Trend

Deep listening: I realised we all share the same...