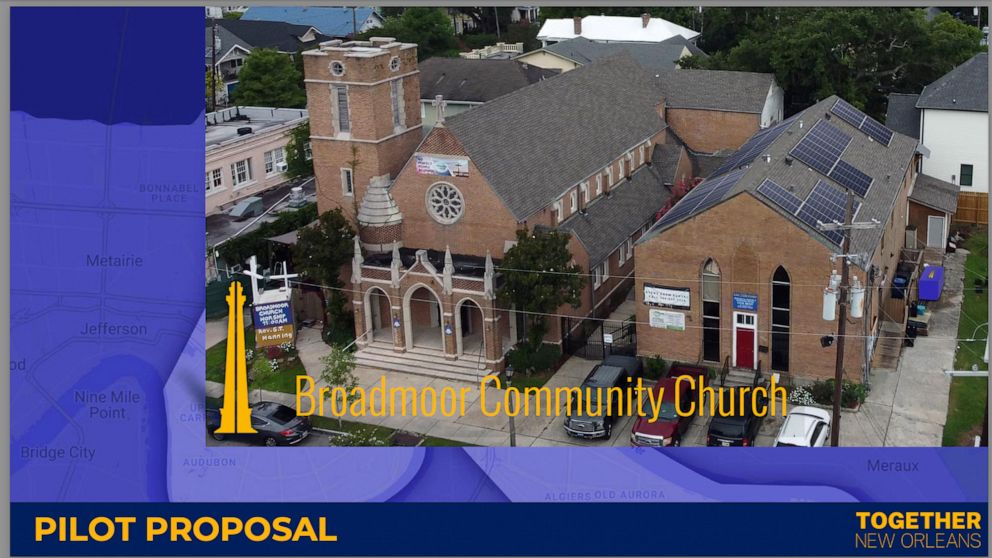 LaPLACE, La. — Enthusiastic church volunteer Sonia St. Cyr lost something she treasures during the blackout caused by Hurricane Ida her independence, afforded her by the electric wheelchair she expertly maneuvers over bumpy city sidewalks.

After Ida I was housebound, said St. Cyr, who has multiple sclerosis. She did her best to conserve power on her wheelchair, going only to the end of her block or sitting on her porch after the storm made landfall last August 29.

It took 10 more days before all of the habitable homes in New Orleans had electricity again. With the lights out and nothing open in her Broadmoor neighborhood of New Orleans, It was not fun.

A project launching in southeast Louisiana aims to help people like St. Cyr who are especially vulnerable during extended power outages as the warming climate produces more extreme weather including bigger and wetter hurricanes.

Community Lighthouses, outfitted with roof solar panels and a battery pack to store energy, can serve as electricity hubs after a disaster, enabling neighbors to recharge batteries, power up phones or store temperature-sensitive medications.

They’re being sponsored by Together New Orleans, a non-partisan network of churches and groups that tries to fix community problems.

Organizer Broderick Bagert said they felt “impotent and powerless as the city struggled to deliver basics like collecting garbage in Idas aftermath. They realized that local governments couldnt handle everything alone.

You can spend a lot of time saying… Why dont they? said Bagert. But you start to realize the real question is Why dont we?

More than just energy hardware, each lighthouse needs a team of volunteers to study their areas, learn who has health problems and who needs medication refrigerated or depends on electric wheelchairs for mobility. While people with means can evacuate ahead of a hurricane, about one in four people live in poverty in New Orleans, and not everyone can afford to flee. Hurricanes are also forming more quickly due to climate change, making it more likely that people can find themselves stuck in a disaster zone.

Each lighthouse should be able to connect with all of its neighborhoods vulnerable people within 24 hours of an outage, Bagert said.

This is not all about batteries and and solar panels. There are some other batteries and solar panels made by the hand of God. And that is called the human personality, the Rev. JC Richardson, pastor of Cornerstone United Methodist Church, said during an event announcing one of the locations.

The pilot phase anticipates 24 sites 16 in New Orleans and eight elsewhere in Louisiana. Theyve raised nearly $11 million of the anticipated $13.8 million cost with help from the Greater New Orleans Foundation, the city, federal funding and other donations.

Jeffrey Schlegelmilch, director of the National Center for Disaster Preparedness at Columbia University, said systems that can operate independent of the power grid often referred to as microgrids are becoming more popular as businesses and communities address climate change by trying to reduce their carbon footprint or secure backup electricity.

Were expecting more extreme weather. Were expecting more stress on the grid, he said. It’s particularly important to have such hubs in places with high levels of chronic disease, where outages can take an outsized toll, he said: Keeping them powered up could mean fewer people in ambulances.

An Associated Press analysis found that weather-related outages doubled over the last two decades. Louisiana is one of three states experiencing a 50% increase in outage duration.

Pastor Neil Bernard anticipates helping many more people at his New Wine Christian Fellowship in the New Orleans suburb of LaPlace. The church is a designated shelter of last resort in St. John the Baptist Parish, which was hard-hit during Ida.

The roar of generators is a common sound after a hurricane, and the parish government provided one to the church, but they are noisy, carbon monoxide fumes are dangerous and fuel can be scarce when storm damage impedes transportation.

Keeping New Wines generator fueled and maintained was a challenge after Ida. Now the church will benefit year-round: Once the lighthouse is installed, Bernard anticipates saving $3,000 a month in energy bills.

Hurricanes arent the only extreme weather triggering interest in microgrids. Experts say theres growing interest in California, where utility companies sometimes preemptively de-energize power lines when conditions are ripe for wildfires so that their equipment doesn’t spark a fire.

Ice and wind storms as well as tropical weather can cause blackouts in places like Baltimore, which launched a similar project in 2015. The city has four locations fully outfitted with solar power and battery backup systems, and aims to have 30 in three years, the citys climate and resilience planner, Aubrey Germ, said in an email.

A number of the systems have performed well during power outages, enabling the Hubs to provide continuity of essential services such as cell phone charging, cooling, and information to residents in need of support, Germ wrote.

CrescentCare lost $250,000 in medicines and vaccines in Ida’s aftermath. The New Orleans-based health care center had two generators when Hurricane Ida hit, but one failed and they couldnt get enough fuel to run the other, said CEO Noel Twilbeck.

Now, the center will serve as one of the first Lighthouses in the area.

The solar panels are designed to withstand 160-mph winds, said Pierre Moses, the president of 127 Energy, which finances and develops renewable energy projects. He’s also a technical consultant to the Community Lighthouse effort.

Direct Relief, one of the donors financing the lighthouse project, didn’t aim to be an energy provider it began funding microgrids after being asked repeatedly to pay for generators and fuel after hurricanes.

The humanitarian aid group’s president and CEO, Thomas Tighe, sees the value now that medical records are computerized and more people need energy-dependent devices at home such as dialysis machines and oxygen.

Youve set things up presuming there will always be power and that presumption is no longer valid in a lot of places, he said. Here are the countries that import the most Russian...

Another independent Hong Kong site halts production out of...

Woman killed in crash between car and pedicab in...

Time writer knocks free speech as an ‘obsession of...

Universal Control finally arrives on macOS Monterey after a...

6 charged with bid to smuggle arsenal to Mexican...

Review: Sheila Heti offers a story strained by the...

Outraged by strike on Odesa, Ukraine still prepares to...

The end of the Statehouse vaccine mandate

Microsoft Teams will now tell you how to reply...

Government backs bill to promote use of British Sign...

Tips On How To Pick A Non-Woke College

Secretary Mayorkas has failed to defend our homeland and...

Battle for Mariupol draws toward close after surrender

Lindsey Piegza on the Fed (Radio)

Covid: Firm behind vaccine to set up base in...

Shauna Lennon: From wheelchair to walking on stage at...

Stories from the Parks: #HalfwaytoHalloween

Couple recounts daring escape in rain of bombs from...

Sri Lanka: The divisions behind the country’s united protests

Profit Seems to Be the Hardest Word: The Readout...