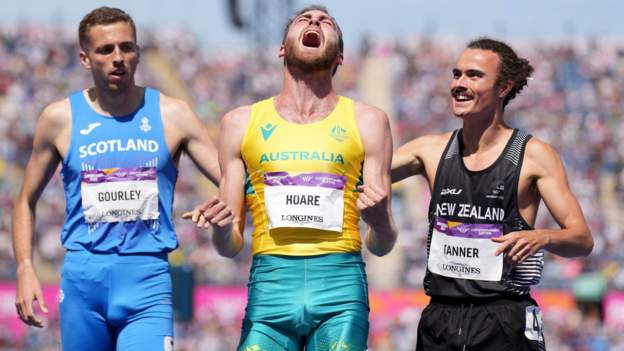 Scotland’s world champion Jake Wightman had to settle for a Commonwealth bronze medal as Australia’s Oliver Hoare charged through in the final few metres to claim a sensational 1500m gold.

Wightman, who stunned the world championships in Eugene last month, made his move with 200m to go but could not hold the lead.

Hoare edged past Kenya’s Olympic silver medallist Timothy Cheruiyot at the line before sinking to his knees in disbelief at Alexander Stadium.

Meanwhile, England’s Nicky Miller defended his hammer title, having nearly failed to make it into the final three throws.

The 29-year-old faulted on his first two attempts, then threw 69.04m to make it into the top eight, before his fifth throw of 76.43 secured gold ahead of Ethan Katzberg of Canada, and Alexandros Poursanidis of Cyprus.

Wightman was aiming to clinch the second leg of a golden hat-trick this summer, having won world gold and with the European Championships in Munich to come this month.

There was much anticipation at another sold-out session at Birmingham’s Alexander Stadium as Wightman led a stacked field of home nations athletes, plus formidable Kenyans Cheruiyot and Abel Kipsang.

But the story was Australia’s Hoare, who smashed his personal best by over two seconds to set a games record and correct his below par performance in the world championships, where he failed to even make the final.

The 25-year-old was fourth heading into the home straight, but powered through to deny Cheruiyot in the final few metres to become the first Australian man to win Commonwealth 1500m gold since Herb Elliot in 1958.

Wales’ Jake Heyward was fifth, and England’s Matthew Stonier seventh ahead of Scotland’s Neil Gourlay, who finished eighth despite running a personal best. US embassy: Russian attack on Ukrainian nuclear plant ‘is...

How Prescribed Burns Can Help Restore Eastern US Forests

The Psychology Behind the Market Selloff (Podcast)

Glacier Collapses Are a Growing but Hard-to-Predict Threat

Ukrainians demonstrate in Kyiv amid threat of Russian invasion

Can you identify these players who moved between the...

Lee Greenwood on 4th of July and America: ‘Grateful...

Match of the Day analysis: How Man City leapfrogged...

Headcounts are down at public schools. Now budgets are...

‘We should not defund’: Democrats press Pelosi for vote...

Nebraska congressman found guilty of lying to FBI about...

Scottish Premiership: Who does your team still need to...