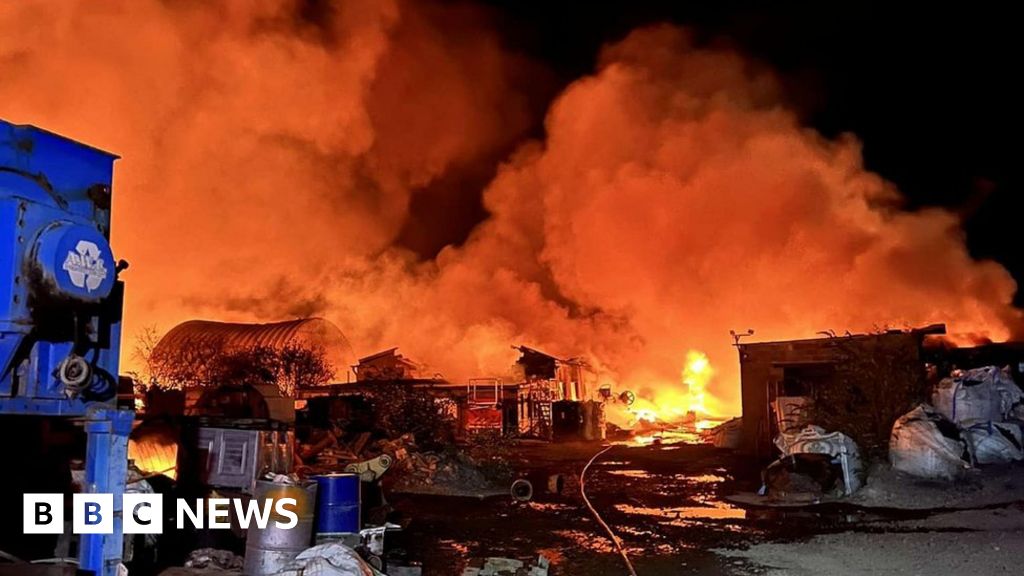 A major blaze in Nottinghamshire involving hundreds of tyres is being treated as suspected arson.

Emergency services were called to a scrap yard on an industrial site in Ranskill at 10:23 BST on Friday.

Fire crews have said they will be there for the rest of the weekend.

Police said a full investigation would start when the flames were out but early inquiries had revealed a group of young people were seen letting off fireworks just before the fire started.

On Friday a column of black smoke could be seen for miles and residents were advised to keep windows and doors closed.

Image caption, Police said the cause of the fire was still unknown

Nearby business premises were evacuated and damage was also caused to outbuildings and power lines, police said

Insp Matt Scott said: “We are continuing to work closely with Nottinghamshire Fire and Rescue Service and a joint investigation will be launched to establish the circumstances of how the fire began.

“While the cause is still unknown we are currently treating it as suspected arson after it was reported a group of young people were seen letting off fireworks just before the fire started.”

Image caption, The fire service said the flames had been fought in ‘difficult conditions’

The fire service said the blaze had been “vastly reduced” overnight but work would continue for days.

At its height 14 fire engines were on scene, along with support vehicles.

Incident Commander Damien West tweeted: “Hard work by crews has made great progress in difficult conditions meaning the fire has been vastly reduced by first light this morning.

Image caption, Nearby residents and businesses were thanked for their cooperation during the response

Nottinghamshire Fire and Rescue Service thanked colleagues from Derbyshire, South Yorkshire, and Lincolnshire for their help.

It also thanked local businesses and the community for their “patience and understanding for the disruption of the fire has caused”. COVID testing: what to know

As millions suffer from ‘COVID-somnia,’ here’s how you can...

Opinion | The Covid Emergency Is Ending. Here’s What...

Shelter in Ukraine’s capital takes in animals haunted by...

Walmart is slashing prices to get rid of excess...

Cabinet minister in Dominican Republic slain in his office

Russia continued to reinforce defence in southern Ukraine over...

Are the sanctions on Russia enough to stop Putin’s...

‘American democracy is not a reality show’: Biden roasts,...

A Fragile Moment for the Real Economy

Senate GOP delays votes on Raskin and 4 other...

Boeing Gets Green Light to Deliver 787s After FAA...

Turkey and U.S. will coordinate response to Ukraine war,...

Are we failing young people with cancer?

We have the technology to end the airport liquid...