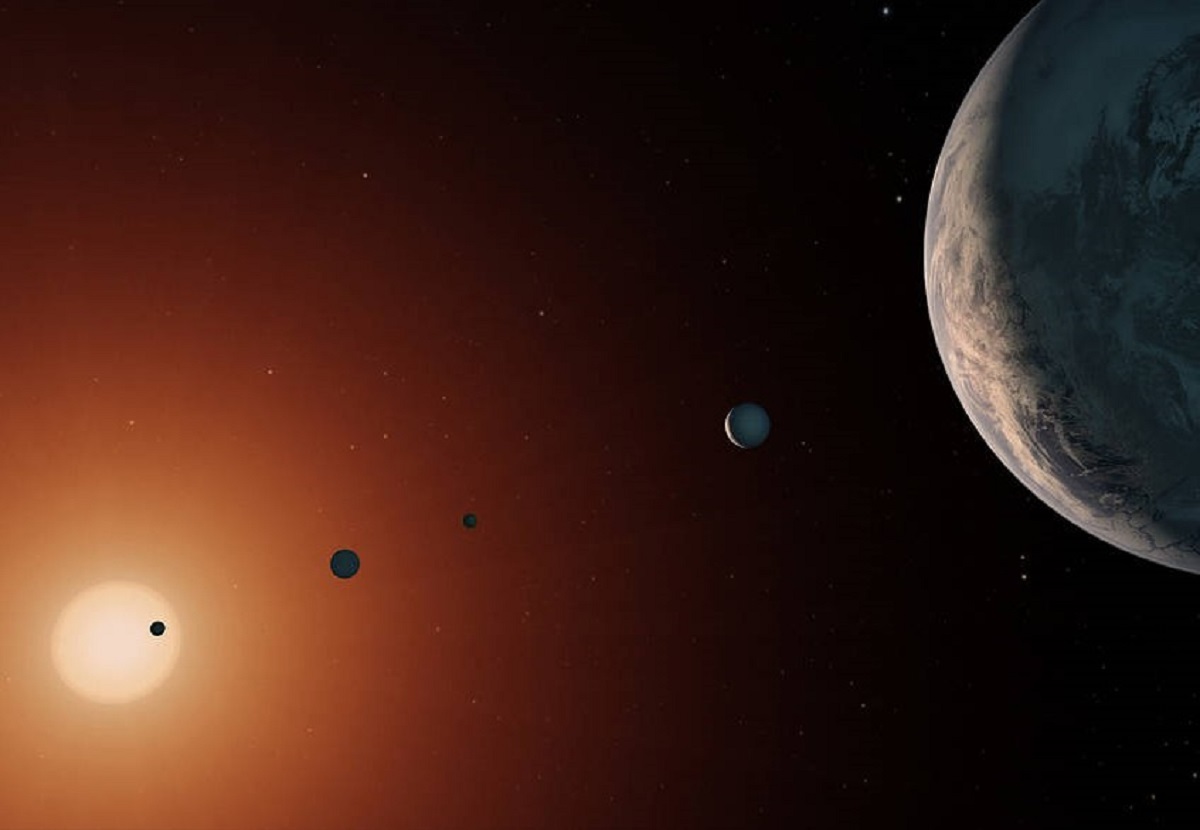 Scientists will be able to work out whether a group of nearby exoplanets are habitable or not by studying their potential atmospheres, a NASA expert has said.

The question of whether the TRAPPIST-1 exoplanets have atmospheres is “the most important” scientific investigation that anyone involved in the search for alien life is going to be doing for potentially a decade, NASA astrobiologist Shawn Domagal-Goldman told Newsweek.

Despite decades of scanning the skies for radio signals and an ever-growing list of exoplanets—the name given to planets orbiting other stars—scientists have never found evidence that life exists anywhere but Earth. If it does, the consequences to science, philosophy and religion could be profound.

The TRAPPIST-1 star system is a collection of at least seven exoplanets orbiting a dwarf star roughly 40 lightyears away from Earth that is considered to be the leading candidate for potentially habitable worlds—and maybe even life.

While preliminary investigations have revealed that the planets are rocky and possibly temperate, the key question of whether or not they have atmospheres has been impossible to glean with past technology.

That’s before the James Webb Space Telescope (JWST) was launched in December as NASA’s most powerful space telescope ever. By peering into the cosmos with a huge array of mirrors to help it capture as much light as possible, Webb has already taken the deepest infrared image of the universe ever.

For several weeks, it’s also had its sights trained on TRAPPIST-1 as a matter of priority. The key thing the telescope will be looking for is any trace of an atmosphere surrounding the planets.

“The thing that I think is universally interesting to just about everybody is whether or not these planets have atmospheres,” Domagal-Goldman said. “It’s critical for habitability. The moon gets just as much energy from the sun as the Earth does, but it doesn’t hold on to its atmosphere and so it doesn’t have any oceans and it doesn’t have any global biosphere.”

In contrast, the TRAPPIST worlds are large enough to hold onto their atmospheres since greater mass means more gravity. However, the unknown factor is whether their nearby star, TRAPPIST-1, has been violent enough to blast these atmospheres away over time due to outbursts of high-energy radiation.

“So it’s a first-order question to answer for the habitability of these worlds: whether or not they do have atmospheres. It turns out that’s also the easiest thing that Webb can observe,” Domagal-Goldman said.

The exoplanets are of interest to scientists because they are thought to be rocky and potentially habitable worlds. Above, an artist’s impression of the TRAPPIST-1 system in space, released by NASA. NASA/JPL-Caltech

The Stuff of Life

Once an atmosphere is detected on any of the TRAPPIST worlds, the next question to answer will be: what are they made of? This will see scientists’ line of questioning shift from whether these planets have the potential to host life to whether or not they do host life.

This gets more complicated, involving in-depth measurements of the planets via a technique known as transit spectroscopy.

Essentially, scientists will use Webb to capture the light from TRAPPIST-1 whenever it passes through the atmospheres of the TRAPPIST exoplanets. If this light encounters any gases, like oxygen, carbon dioxide, water vapor, or methane, then this will leave a telltale trace in the starlight that Webb can detect.

“If you want to look for the kinds of biosignatures that we have on Earth, which is to say oxygen and ozone from plants and algae, that’s a great biosignature because if you see it, it’s less likely to be produced by-non biological processes,” Domagal-Goldman said.

One problem with this is that if a planet’s atmosphere is high in oxygen gas and ozone (ozone is atmospheric oxygen but with three oxygen atoms instead of two) the risk is that both of these will be “locked up below the cloud decks” making them harder to observe.

Fortunately, there’s another gas that can also be a telltale sign of life: methane, a gas that is known to be produced by living organisms. So much so that scientists have been working to try and stop cows belching so much of it out, since methane is a strong greenhouse gas.

The presence of methane in another world is especially exciting if that methane is mixed together with other gases that should drown it out.

“If you know that the methane is being destroyed rapidly, it has to be replenished rapidly and that rapid replenishment is the biosignature.”

It’s uncertain when a breakthrough discovery about the TRAPPIST-1 planets can be expected, but with an estimated 20 years ahead of it, Webb has plenty of time to look.

“For exploration of potentially habitable worlds, the question of whether the TRAPPIST planets in the habitable zone have atmospheres is the most important scientific question or observation that anyone’s going to be doing, with JWST or any other facility, probably for the next five or 10 years,” he said.

Roe Is Overturned After 49 Years. It Revolutionized Life...

Japan to Keep Border Controls in Place as It...

The U.S. is welcoming Finland and Sweden to NATO....

London Underground: TfL lost £13m in fares due to...

Dan Genter on the Markets (Radio)

Your co-workers have probably been involved in a data...

The Pentagon is investigating extremism in the military. Here’s...

Prominent athletic trainer in Orange arrested on charges of...

Security staff at 8 German airports to strike on...

Ex-Georgetown lecturer speaks out after resigning following criticism of...

Here’s What Just Happened to the Stock Market and...

In virus-hit China, investors rush headlong into bonds and...

Russia’s Putin: We are yet to see the quality...

Another top NFT company has been hit by a...

Ukraine could be painful ‘porcupine’ for Russia: Petraeus

‘Sit down!’ Biden heckled at White House by bereaved...