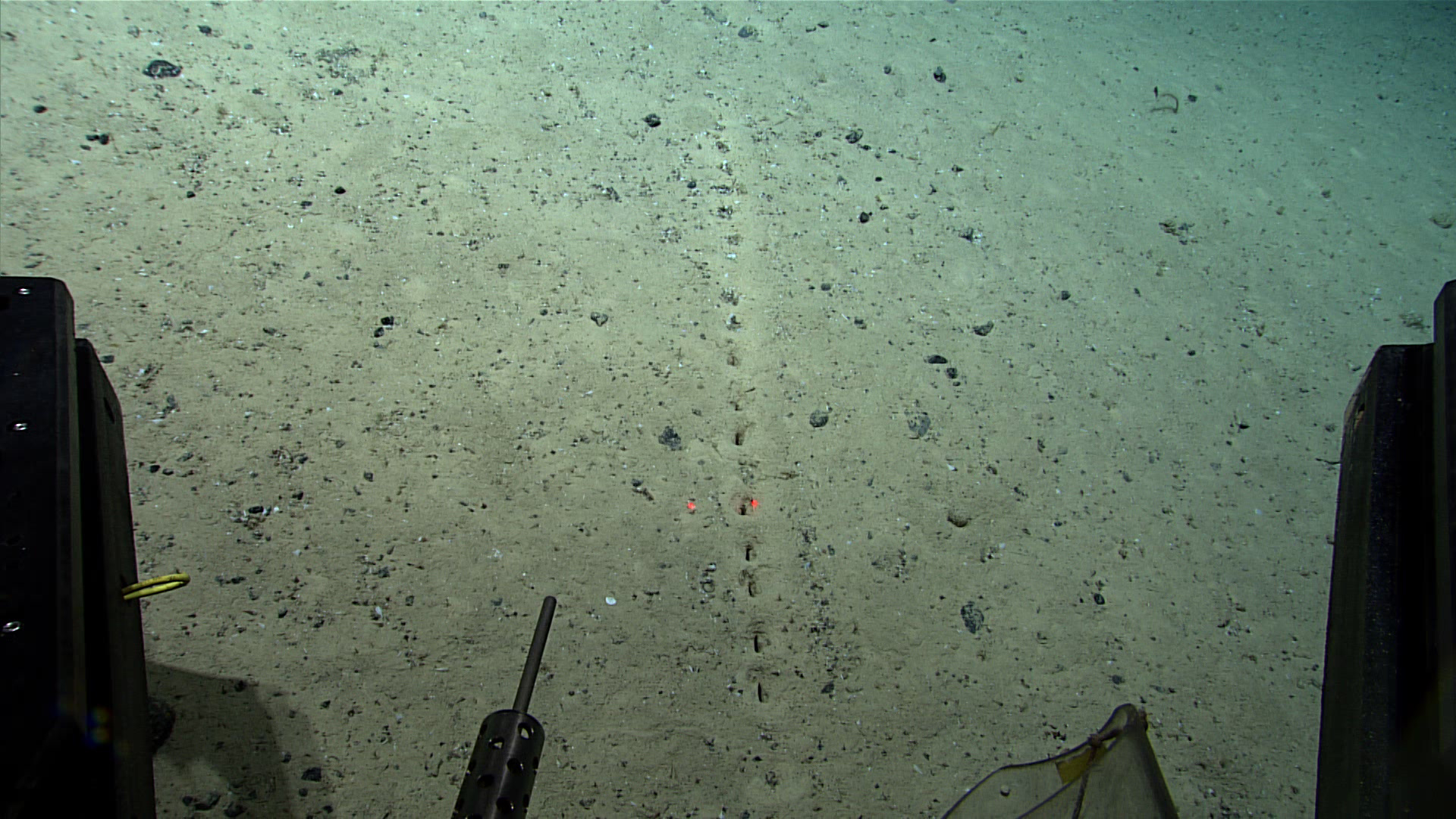 Mysterious holes found at the bottom of the ocean by marine researchers are set to be probed for DNA in a bid to determine what created these weird, regularly spaced features.

In July, the U.S. National Oceanic and Atmospheric Administration (NOAA) said lines of holes had been found on the ocean floor at a depth of around 8,300 feet below the surface of the Atlantic.

Photos posted by the agency showed a series of holes all spaced neatly apart in a straight line. Another characteristic of the holes is that they appear to be surrounded by small piles of sediment, suggesting they had been excavated.

Researchers were so puzzled they appealed to the public for possible explanations, which ranged from escaping gasses to aliens.

To find out for sure, the NOAA researchers have taken water samples from the area in the hopes that they’ll find some environmental DNA—fish scales or mucus, for example—that could point to an animal origin.

“That’s useful because animals shed DNA into their environment, and you can sequence it and sometimes you can find out what animals are nearby,” Mike Vecchione, a research zoologist with NOAA Fisheries’ National Systematics Laboratory, told Newsweek. “But it’ll be a few weeks, probably, before we get an answer back from that. I don’t know whether the answer will tell us anything about what’s causing the holes or not.”

A photo of some of the mysterious underwater holes spotted in the Atlantic Ocean during a 2022 NOAA voyage. Scientists are working to determine their origins.NOAA Ocean Exploration, Voyage to the Ridge 2022

Vecchione, who also discovered a similar phenomenon during a 6,800-foot dive along the Mid-Atlantic Ridge in 2004, believes an animal is the most likely cause, as opposed to geological activity, or, of course, aliens. One reason for this is because similar things have been seen in fossil records, he said.

This is only part of the puzzle, however. Even if an animal were the cause, it’s unclear how it would have created the holes in the first place, or what purpose they would serve.

“What I think is going on is that something is burrowing under the surface of the mud and periodically poking up chimneys, perhaps to get clean water down into its burrow and make it more habitable,” Vecchione said.

Another angle of the underwater holes seen during the 2022 NOAA expedition. One theory is that the holes were made by an animal or animals.NOAA Ocean Exploration, Voyage to the Ridge 2022

“The other alternative is that something above the sediment is poking down, over and over again, sort of like a shorebird does. If you watch the peeps along the edge of the waves at the beach, they’ll walk along and poke their bill down into sediment to try and find things to eat. I don’t think that’s it, because we don’t ever see any tracks beside these lines. Somebody suggested it could be a fish swimming, or some other organism swimming just above the bottom and poking down like that, which is a possibility.

“There are a lot of other suggestions, and right now we don’t have a lot of information to rule any of them out.”

However, Vecchione added that these suggestions still don’t explain how the holes have such “remarkable” regularity in their spacing.

Bill Chadwick is a senior researcher at the Oregon State University Hatfield Marine Science Center whose expertise is in geology and volcanology. He told Newsweek he has made many remote dives but has “never seen anything like these holes.”

“I would agree … that they most likely are biological and made by either an animal burrowing from below in some sort of tunnel, or perhaps digging down from above but working in a straight line for some reason,” he said. “It’s a bit of a head scratcher though.”

Chadwick added other mysterious underwater holes, also found in the fossil record and around the world, have been observed before but in hexagonal patterns rather than a straight line. “Similarly though, people have no idea what creates those hexagonal burrows either!” he said. Coast Guard searches for downed plane with 8 aboard...

China locks down another city as Omicron spreads ahead...

After leak, religious rift over legal abortion on display

California’s Trees Are Dying and Might Not Be Coming...

Ukraine’s Ports Must Be Reopened or Millions Face Starvation...

Pope prays for kindness to refugees as he wraps...

Pixel 7 chipset and codenames may have been revealed...

Kinzinger: ‘I’m not confident that Meadows has handed over...

Patrick Schwarzenegger says his dad Arnold is ‘obsessed’ with...

California woman rented Michigan Airbnb for a month to...

Experts worry about how US will see next COVID...

Kanye West to ditch Spotify and Apple Music with...

Q&A Why Do Vaccines Wear Off So Quickly

The next Star Wars RPG has been delayed

Balance of Power: Can Ukraine Prevent Fall of Donbas?...

Pedestrian critically ill after being hit by car