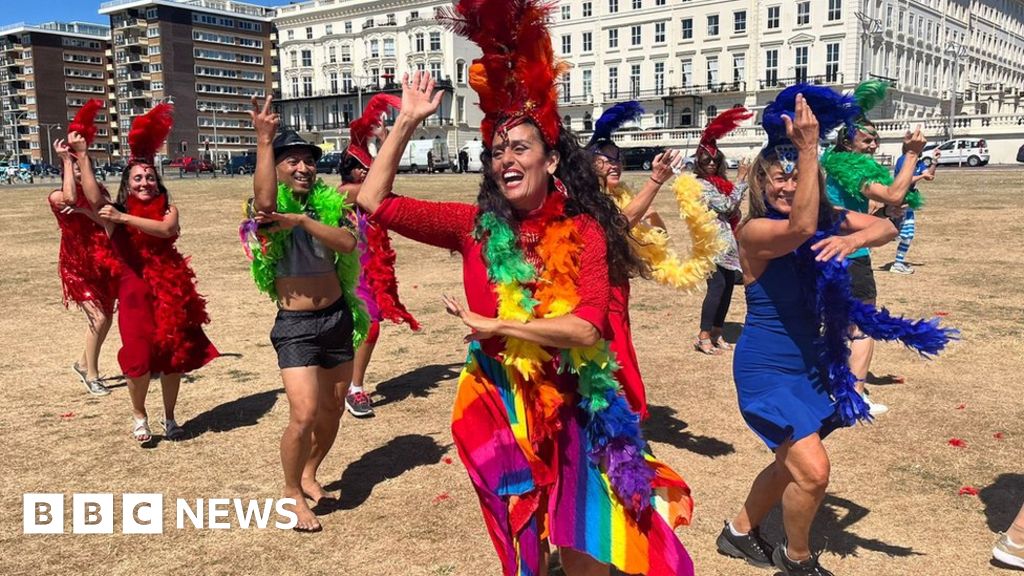 One of the UK’s biggest pride events is celebrating its 30th anniversary.

Brighton Pride is back on the streets of the south-coast city, after being cancelled for the last two years due to Covid.

A large parade is due set off from Hove Lawns before making its way through the streets of the city.

Global superstar Christina Aguilera is the headline act at a concert on Saturday evening, with Paloma Faith headlining on Sunday.

Image caption, The festival has previously attracted crowds of about 250,000 people

A Brighton Pride spokesperson said: “2022 will be a joyous commemoration of the brave trailblazers, campaigners and supporters who shaped the Pride movement in the city and helped us achieve the LGBT+ equality we all enjoy today.”

The first Brighton Pride was held in 1973 but it did not return to the city again until 1991.

The event usually attracts crowds of about 250,000 people.

The weekend-long festival, which includes a community parade and village party generates about £20m for the city economy annually.

This year’s event also marks the 50th anniversary of the first march in the city organised by the Sussex Gay Liberation Front (SGLF).

Image caption, Previously unseen images of a march in the city in 1973 went on display last year

Peter Tatchell, gay rights activist, said of the anniversary: “Pride is both a celebration of LGBT+ lives and culture and the contribution we make to the community, but is also a protest about rights.

“I’m so pleased that Brighton Pride has a theme this year of love, protest and unity and you can see around the streets banners highlighting human rights abuses against our community.” Bob Saget’s autopsy completed: ‘No evidence of drug use...

Jobs report: Unemployment drops to its lowest rate in...

Man accused of raping woman on flight to London

‘I was chased by skinheads when I arrived in...

Kanye West’s flame Julia Fox is ‘kind of like...

Haridwar hate speech: Who is the arrested Hindu priest...

‘She was going to be someone.’ Families and friends...

John Ratcliffe: Biden administration ‘willing to accede’ to our...

Check out this year’s Future Tech Awards winners, from...

Chelsea Bridge: Family of man who died after Taser...

Opinion | Putin Has a Big Piece of Leverage...

It’s the End of a Pokémon Era

Nadal happy to be back competing again after setbacks...

These Are the U.K.’s Two Worst Hotel Chains

Bitcoin and the Rule of the Material