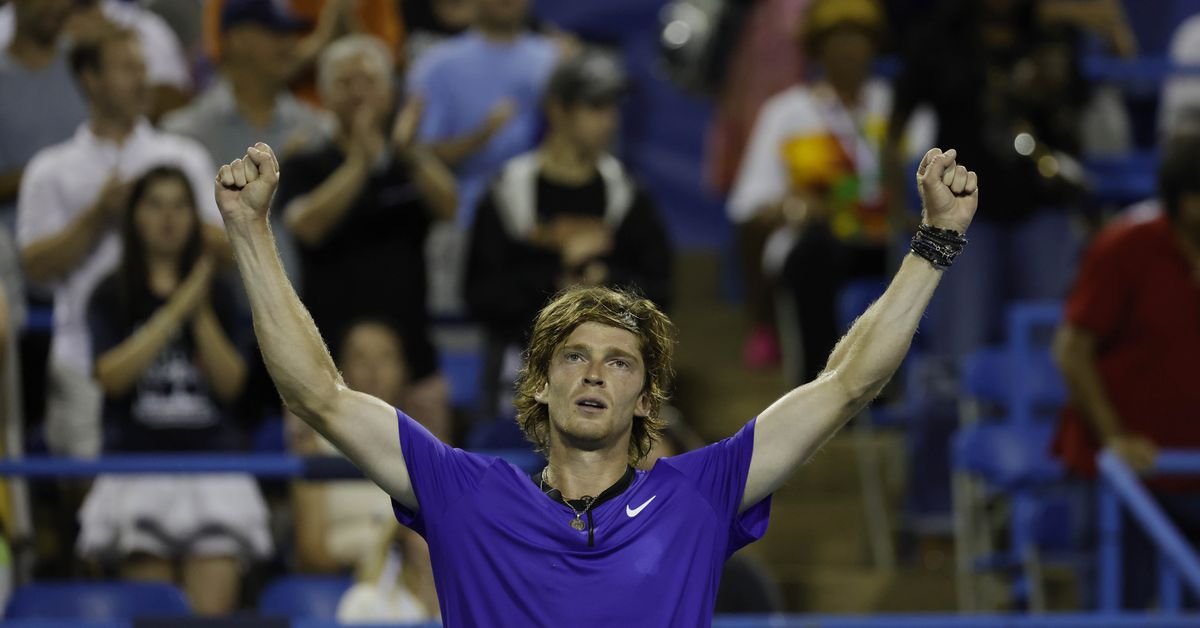 August 6 – Top-seeded Andrey Rublev of Russia and recent Wimbledon finalist Nick Kyrgios of Australia both won two matches on Friday to reach the semifinals of the Citi Open in Washington.

The tournament’s schedule was compacted due to previous weather-related suspensions and postponements.

Kyrgios led fourth-seeded Reilly Opelka of the United States 7-6 (1), 2-1 when their match was halted on Thursday, and the Aussie came back to finish a 6-2 victory in the second set. He faced a much tougher test later against 10th-seeded Frances Tiafoe of the United States before prevailing 6-7 (5), 7-6 (12), 6-2.

Tiafoe squandered five match points in the second set before Kyrgios leveled the match on his fourth set point.

Kyrgios’ semifinal foe will be Sweden’s Mikael Ymer, who defeated the United States’ Sebastian Korda 6-2, 5-7, 6-3 in the quarterfinals. Earlier, Korda completed a suspended match against fifth-seeded Grigor Dimitrov of Bulgaria, taking a 4-6, 6-1, 6-2 win.

Top-seeded Daniil Medvedev of Russia got hot mid-match and rolled to a 7-6 (0), 6-1 win over fourth-seeded Miomir Kecmanovic of Serbia in the semifinals at Los Cabos, Mexico.

Medvedev won the last 11 points of the first set, then jumped out to a 3-0 lead in the second set and was never threatened.

Medvedev will match up against third-seeded Cameron Norrie of Great Britain in the final. Norrie defeated second-seeded Felix Auger-Aliassime 6-4, 3-6, 6-3 in the other semifinal.

Norrie has been in three previous finals this year, and he won twice. Medvedev has lost his past five championship matches, including last year’s ATP Finals and the Australian Open in January.

Oldest Commonwealth Games baton bearer over the moon to...

G-20 Meetings: Yellen to Attend Some Even if Russia...

New book shares the ‘key’ to happiness as you...

Dave Chappelle attack: Suspect charged with assault with a...

What the Marcos’ return to power means for the...

Emirates to Stick With Schedule After Consulting Airport Firms

Confessions of a Conspiracy Theorist

Nigeria’s renters may no longer have to pay a...

See more of our ongoing coverage

Charles ‘Stupid’ to Accept €3m in Cash as Calls...

Bitcoiners Are Trying to Redefine the Word ‘Inflation’

Cardi B Turns Up The Heat On Ye-Assisted Banger...

Cost of living: Doctors in Wales get below inflation...

Ukraine Maps Reveal How Much Territory Russia Has Lost...

Voyager Bankruptcy: Account Holders Likely Won’t Get All Their...

Biden wants to get out more, seething that his...

Oil falls on China growth concerns even as EU...

Tory Hopefuls Cross Their First Hurdle: The Readout With...