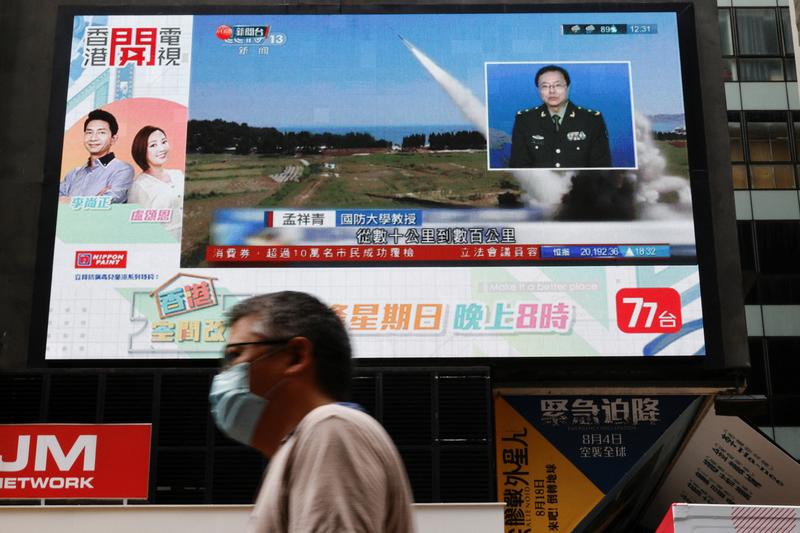 HONG KONG (Reuters) – Chinas cutting of some of its few communication links with the U.S. military raises the risk of an accidental escalation of tension over Taiwan at a critical moment, according to security analysts, diplomats and U.S. officials.

In an editorial on Saturday, the Communist Partys Peoples Daily newspaper described the response, along with sanctions against Pelosi and her family, as effective measures that fully demonstrates that China is fully determined and capable of safeguarding national unity and safeguarding … sovereignty and territorial integrity.

Christopher Twomey, a security scholar at the U.S. Naval Postgraduate School in California, told Reuters the severing of the communication links was worrying, coming at what he believed was the beginning of a new Taiwan crisis.

China fired ballistic missiles over Taipei as part of four days of unprecedented military drills around the island it claims as its own – exercises due to end at noon on Sunday.

This increased density of forces, in the context of an intensifying crisis, raises the prospect for inadvertent escalation that neither side wants, Twomey said, speaking in a private capacity.

That is precisely the time you would want to have more opportunities to talk to the other side … Losing those channels greatly reduces the ability of the two sides to de-conflict military forces as various exercises and operations continue.

Over time, she said she expected the specific talks called off this week would resume but right now, China has to signal toughness and resolve.

A U.S. official, speaking on condition of anonymity, said Chinese officials had not responded to calls from senior Pentagon officials this week but that was seen as China showing displeasure over Pelosis trip rather than the severing of the channel between senior defence officials, including U.S. Defense Secretary Lloyd Austin. [L1N2ZH19D]

Austin pushed for improved communication between the rival forces when met Chinese Defence Minister General Wei Fenghe on the sidelines of Shangri-la Dialogue security meeting in Singapore in June.

Both Asian and Western diplomats said U.S. military chiefs had been pushing for more frequent theatre-level command talks for some time, given Chinas growing deployments across Asia, where the U.S. navy has traditionally been the dominant power.

The Pentagon said on Friday that China was overreacting and the United States was still open to building crisis communication mechanisms.

Part of this overreaction has been strictly limiting its defence engagements when any responsible state would recognise that we need them now the most, acting Pentagon spokesman Todd Breasseale said. Scotland ‘A’ side to face Chile on before Argentina...

Passengers advised to fly with just one bag

They’ll always have ‘Marcel the Shell with Shoes On’

Top Senate Republican Proposes Bill for Americans to Get...

How to Start (and Keep) a Healthy Habit

Trump notches a loss in Nebraska as Herbster goes...

Energy secretary: US offshore wind jobs should be union...

Spotify to add content advisory to podcasts that discuss...

How do sea turtles navigate?

Amazon raises price for US Prime as profits jump

Orkney and Shetland Valuation Joint Board criticised in report

Louisiana man who killed wife released to sister in...

Manchin says he won’t vote to ‘eliminate or weaken...

Lab Stocks Scramble for New Growth in India as...

What you need to know about Finland’s and Sweden’s...

Bug popsicles and air-conditioned bedrooms: Here’s how zoos are...

Kellyanne Conway says Americans will be thinking of Biden...

Ukraine conflict: Growing numbers of firms pull back from...

The Multiverse Swallows Everything — Including Politics