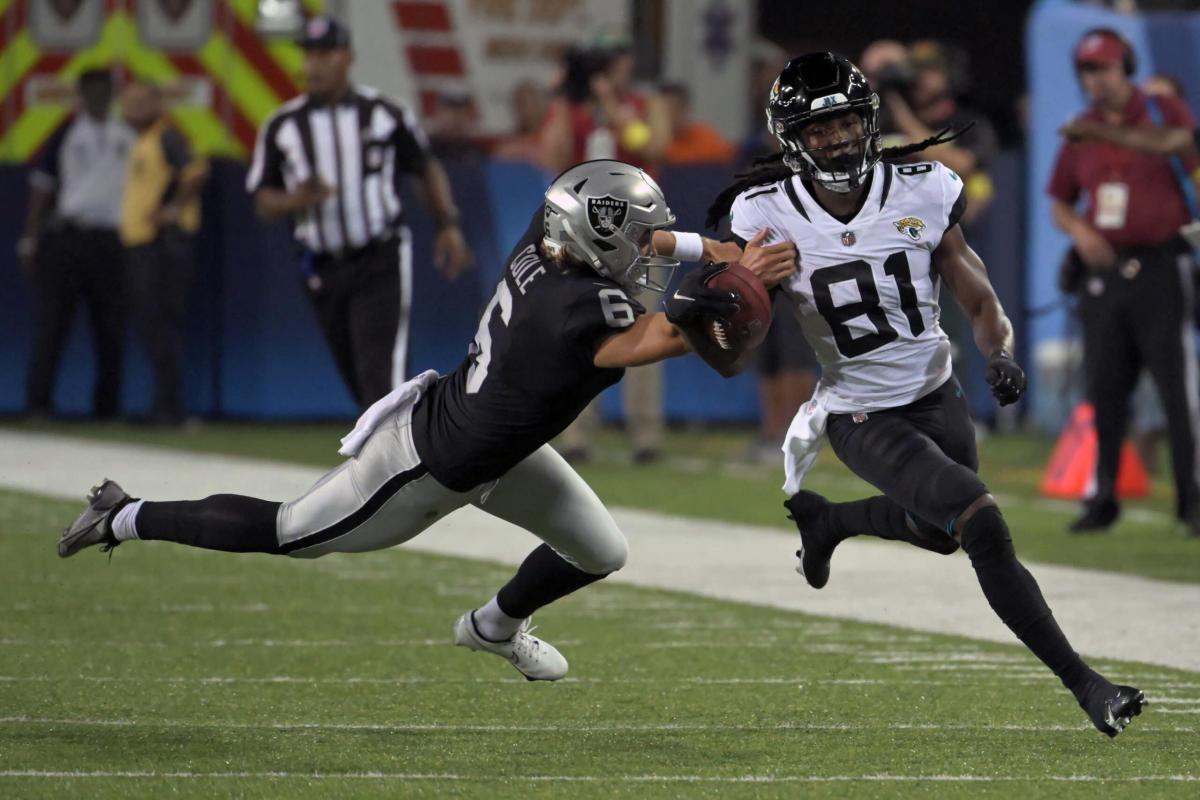 The Jacksonville Jaguars first preseason game is in the books as they traveled to Canton to play the Las Vegas Raiders in the Hall of Fame Game Thursday. Unfortunately, the team couldnt start things with a win after falling to the Raiders by the score of 27-11, but as fans are aware, the preseason is about evaluations more than anything.

The game wasnt one where there were a lot of offensive highlights, but its worth mentioning that the Jags played a very limited amount of their starters on that side of the ball. At the same time, fans were hoping for a stronger game from the teams young players, but there are plenty of preseason games left for them to improve.

While the Raiders finished the game with 27 points, the bulk of the highlights for the Jags came on the defensive side. Unlike the offense, the defense played a good bit of their starters, although it was for a limited amount of time.

As there is in every game, there were good and bad takeaways from Thursdays game. Here are five we gathered as the Jags took the field for the first time under Doug Pederson:

The biggest positive of the game undoubtedly was seeing No. 1 Travon Walker make an impact from the first snap he took the field to the last series he was on the field. During the first offensive play of the game, Walker bull rushed his way through Raiders offensive tackle Brandon Parker and pressured quarterback Jarrett Stidham. While the pass ended up still being a completion and Walker was hit with a questionable roughing the passer flag, fans were simply happy to see the rookie making an impact in his first NFL snap.

During his second series on the field, Walker was able to get his first NFL preseason sack on a second-and-seven play after overpowering Parker and using his length to keep the veteran off him. The play was one that seemingly got the defense going as Arden Key followed it up with a sack on the next play.

Several people questioned the Jags decision to draft Walker, so there were undoubtedly a lot of eyes on him with Thursdays game being the first of the entire 2022 NFL season. At least for now, he handled the spotlight almost perfectly, and its going to be exciting to see how much he improves heading forward.

While Walker had a solid night, Key had an even better one. He ended the game with two sacks (plus two tackles) and is now the NFLs preseason sacks leader.

Of course, the first sack came directly after Walkers as previously mention and the second came in the second quarter when outside linebacker KLavon Chaisson got the initial pressure, and Key came in right behind him to finish the job on quarterback Nick Mullens.

During the first sack, Key won leverage after getting under offensive lineman John Simpson, and he created some separation to get to Stidham. Then during the second sack, he was freed up through a stunt to the outside after initially rushing the interior.

Key was more of a second wave free agent signing who the Jags were able to get on a one-year deal worth $4 million in late March. If he continues to play as he did Thursday, they got a steal out of the young defensive lineman who has also been a great leader for the team.

Key accumulated a pass rush grade of 79.4 according to Pro Football Focus last season with the San Francisco 49ers, a team he says he learned a lot from. On Thursday he picked up where he left off and garnered a 73.3 in last nights game. Thats not a bad way to start his career with the Jags, and fans left the game excited about his ability to get after the quarterback.

The big things that hurt young teams in the regular season, like ball security and penalties showed up for the Jags Thursday night. While their penalty figure of six was the same as the Raiders, the Jags just had too many in key moments.

For example, receiver Willie Johnson had a punt return for a touchdown brought back because of a holding call by defensive back Ayo Oyelola. There was also a holding penalty from offensive lineman Will Richardson that nullified a Jeff Cotton reception that wouldve put the Jags on the Raiders 16-yard line, along with other penalties, too.

Then in terms of ball security, receiver Marvin Hall fumbled once after converting a second down situation. The fumble came as the Jags were crossing the 50-yard line and entered Raiders territory. There was also a bad exchange that went down between center K.C McDermott and quarterback Kyle Sloter as the Jags were trying to convert a fourth-and-one situation. They turned the ball over on downs as a result.

Luckily, these mistakes were by backup players. Still, it will be interesting to see if these players can eliminate these mistakes heading forward because some of them could end up getting practice squad spots if they turn it around.

The Jags had several occasions where they let the Raiders rushing attack get good gains, even when many of their defensive starters were in for the opening two series or so. After the game, Pederson said stopping the run was among the biggest issues he saw Thursday, and its something fans should pay attention to next week.

The Raiders exited the game with 159 rushing yards and almost had a five yard per carry rushing figure (4.8) overall. Two of the Raiders top rushers, Josh Jacobs and Zamir White ended the game with yard per carry averages of 4.7 and six, respectively, after seeing snaps in the first half. And while its just the Jags first preseason game, their struggles are worth mentioning so fans can monitor the run defense heading forward.

The good news is that the Jags were without three of their best interior players in linebacker Foye Oluokun, rookie linebacker Devin Lloyd, and defensive lineman Foley Fatukasi. Time will tell if they play next week against Cleveland, but regardless, defensive coordinator Mike Caldwell may spend a decent amount of time teaching run defense fundamentals as thats an important part of winning the AFC South.

Aside from the negated punt return, there wasnt much to discuss in terms of special teams, but the Jags did have two field goal opportunities. The first was a missed 60-yard attempt from Ryan Santoso late in the first quarter. The good thing was that the kick had plenty of leg and wouldve been good from further back, but it was just slightly to the right of the posts.

The next attempt would come in the second half when Elliott Fry hit a 46-yard field goal late in the third. The attempt was a big one for him as he just joined the Jags a week ago when the team released Andrew Mevis.

Both players are in a battle at the moment and each preseason game presents them with a chance to see how they handle game-day situations. Theyve been pretty evenly matched in terms of their accuracy in practice, but time is probably ticking on a decision as the first wave of roster cuts are due on the 16. That means both kickers have a big week of practice coming up and probably an even bigger game with the Cleveland Browns coming to town on Aug. 12. Fans ‘attempted to give unwanted hugs’ to Chris Paul’s...

Calm in Sri Lanka as president, premier to quit...

Levelling up: Sheffield and Wolverhampton chosen for government regeneration...

Returning To Work Amid Omicron (Radio)

FDA postpones review of Pfizer data on vaccine for...

Hackers want Google accounts; give yours this security check...

Ashling Murphy: Community to gather for funeral of murdered...