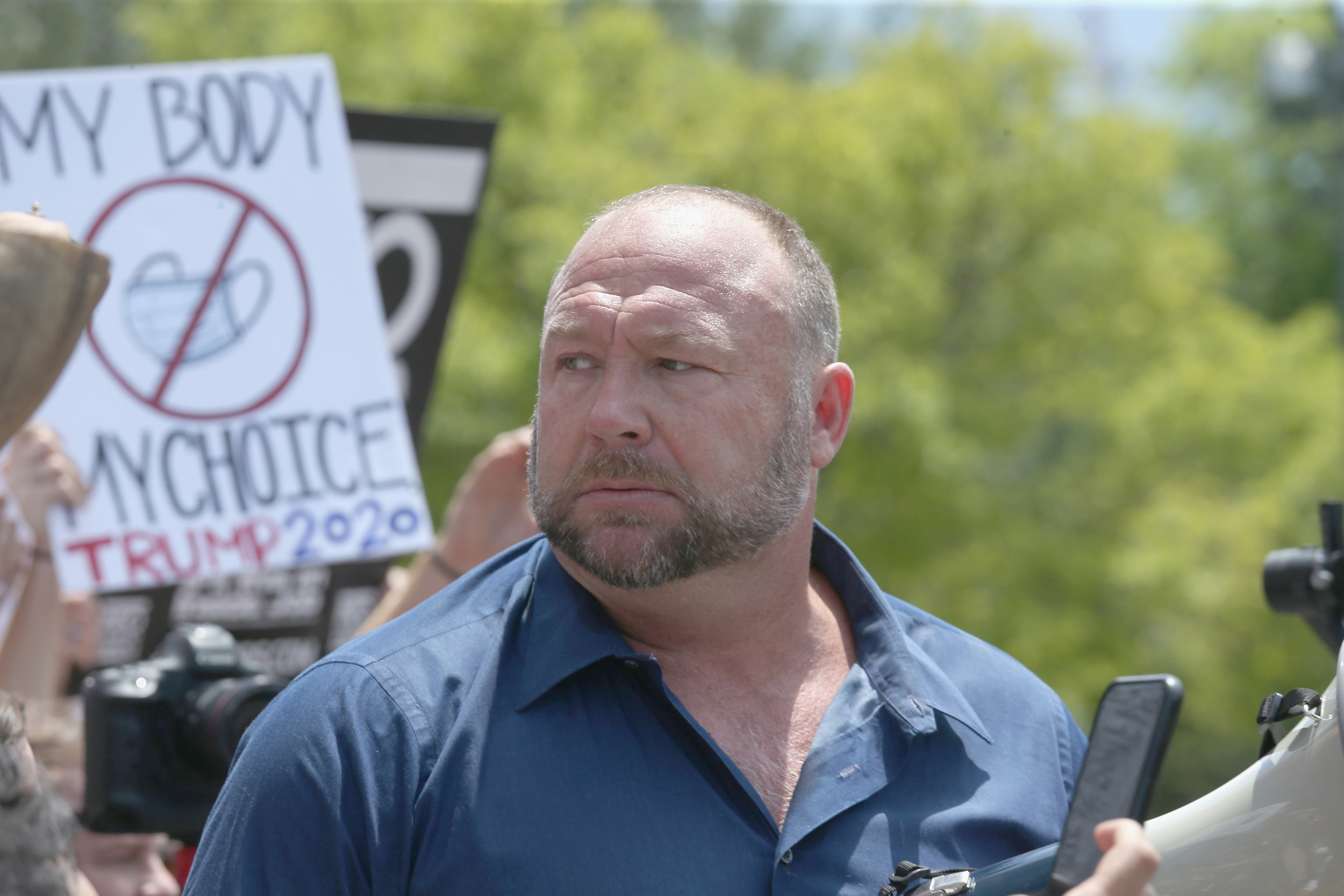 Infowars conspiracy theorist Alex Jones has so far been ordered to pay more than $50 million for falsely claiming that the 2012 Sandy Hook Elementary School massacre was staged, while additional penalties may be awarded at more defamation trials. Jones is pictured during a protest against COVID-19 restrictions, in Austin, Texas, on April 25, 2020. Gary Miller/Getty

A jury ordering Infowars host Alex Jones to pay over $45 million in punitive damages to the family of a 2012 Sandy Hook Elementary School shooting victim will “deter others” from spreading “hatred,” according to a top legal analyst.

Jones was ordered to pay $45.2 million in punitive damages to Sandy Hook parents Neil Heslin and Scarlett Lewis at the conclusion of his Austin, Texas, defamation trial on Friday. The jury awarded $4.1 million in compensatory damages on Thursday. The far-right conspiracy theorist also owes an additional $1.5 million in fines, leaving him on the hook for a total of more than $50 million for falsely claiming that the nation’s deadliest elementary school shooting was staged by “crisis actors.”

Jones could soon be ordered to pay even more due to multiple additional defamation trials related to the Sandy Hook conspiracy theory. Jones has since disavowed his claims and admitted that the shooting was “100 percent real” in court this week. He also argued that any damages over $2 million “would sink” Infowars, although attorneys for the family presented evidence in court that suggested he was making up to $800,000 per day.

CNN legal analyst Joey Jackson, a former New York State prosecutor and current criminal defense attorney, said that Jones being ordered to pay the massive financial penalty this week could serve as an effective warning to other influential figures who might consider airing similarly harmful falsehoods.

“When you have these conspiracy theories that are out there—that it’s fake, it’s a hoax, the parents are actors, etc. … I couldn’t even imagine, none of us could, how it impacts a family emotionally,” Jackson said during a CNN broadcast on Friday. “And you have [Jones] out there spewing this hatred.”

Jackson said that he expected the juries in Jones’ coming trials to award similar damages, in order to force “accountability” for Jones and “send a message” about spreading unfounded conspiracies.

“Accountability will look much like it did here, with a jury coming back for compensatory damages—which are designed to compensate people for out-of-pocket losses—and then punitive damages, with the design to punish,” said Jackson. “To send a message that this is just not something you should be doing.”

“And it will certainly slow [Jones] down,” he added. “And not only that, [it] will deter others who might spew such hatred, and such negativity, and such falsehoods about someone.”

The attorney representing Heslin and Lewis, whose 6-year-old son Jesse Lewis was killed in the Sandy Hook massacre, said on Thursday that the family was already “thrilled” with the compensatory damages they were awarded, despite originally asking for $150 million.

“Neil and Scarlett are thrilled with the result and look forward to putting Mr. Jones’ money to good use,” attorney Mark Bankston said in a statement obtained by Newsweek. “Mr Jones on the other hand will not sleep easy tonight. With punitive damages still to be decided and multiple additional defamation lawsuits pending, it is clear that Mr Jones’ time on the American stage is finally coming to an end.”

Newsweek has reached out to Reynal and Bankston for comment on the punitive damages.

Johnny ‘Joey’ Jones: People are not going to put...

This July Fourth reminds us that election workers are...

Inside the twisted mind of suspected subway shooter: Hannity

UN council backs talk, but no Russia pledge against...

Fallout on the right over the Jan. 6 hearing

IMF urges El Salvador to scale back its Bitcoin...

Russia and NATO ‘on different tracks’ in negotiations, Putin...

Lego Star Wars: The Skywalker Saga is stuffed with...

Why Burmese Pythons Are So Dangerous to Florida’s Ecosystems

Texas inmate who escaped bus got out of restraints,...

Businesses urge PM candidates to focus on growth and...

Republicans to force votes on border, energy, IRS and...