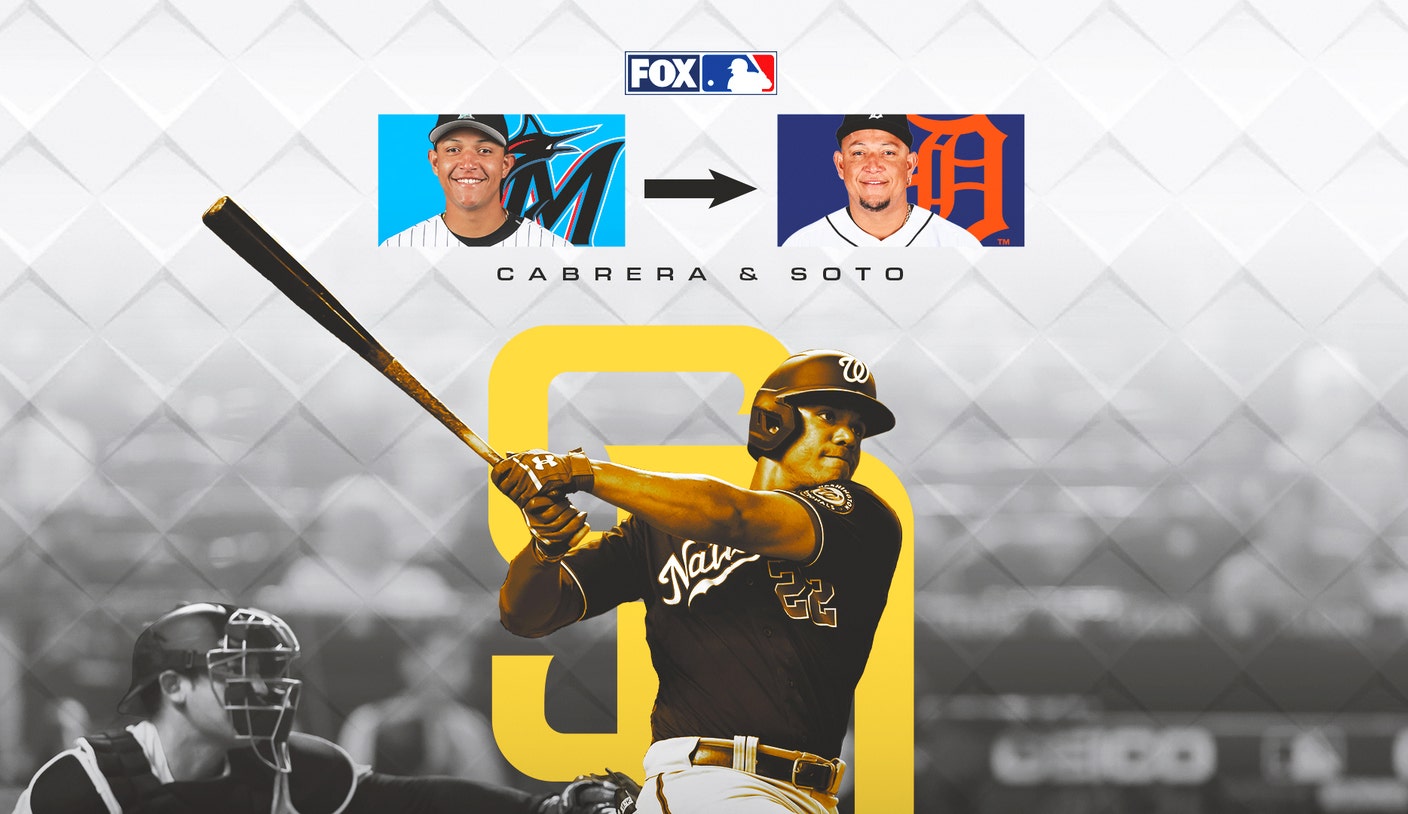 A player like Juan Soto getting traded? What if I told you it’s (kinda) happened before?

Soto going from D.C. to San Diego for a mountain of prospects was the headline of the deadline, if not the whole baseball season. Forty years from now, you may not remember who won the 2022 World Series, but you’ll always remember the drama and intrigue of Soto’s move west.

Fourteen years ago this December, the Florida Marlins sent Miguel Cabrera and Dontrelle Willis to the Detroit Tigers for a package of minor-leaguers that included top prospects Cameron Maybin and Andrew Miller.

A potential Hall of Fame slugger two-ish years from free agency who’d already carried a team to World Series glory in his early 20s sent packing by a rebuilding, penny-pinching franchise that failed to maintain its October success for a group of talented, yet unproven prospects … sound familiar?

The Soto deal was unprecedented, but the Cabrera deal was pretty darn close. Comparing and contrasting the two blockbusters reveals just how much the league has changed in the past 14 years and provides a history lesson on what happens when generational talents are traded so early in their careers.

You know the deal with Juan Soto by now: 23 years old, elite hitter, incredible decision-making at the plate, cute little shuffle when he takes pitches, etc, etc. He has the fifth-highest OPS+ in baseball history among hitters with at least 2,000 plate appearances before turning 24. The only names ahead of him are Ted Williams, Ty Cobb, Mike Trout and Albert Pujols. The entire top 10 are Hall of Famers or future Hall of Famers.

Though Cabrera is now 39 and a shadow of his former self, he was once the precocious young superstar, too. After debuting halfway through the 2003 season as a 20-year-old, Cabrera helped lead the Marlins on an incredible postseason run. In that infamous NLCS against the Cubs, Miggy went 10-for-30 with three homers. In the World Series, he ripped a homer off Roger Clemens, who was drafted before Cabrera was even born.

Over the next few seasons, Cabrera established himself as one of the best hitters in the world, slashing .313/.388/.542 with a 143 OPS+ and 138 homers in his first five seasons. But as the Marlins failed to replicate the magic of their 03 run, ownership grew hesitant to fork over the cash needed to keep Miggy around for the long haul.

After the 2007 season, Cabrera started to hit his more expensive arbitration years and was just two years away from reaching free agency. So the miserly Marlins started shopping their transcendent slugger for the best possible prospect return.

Cody Stavenhagen of The Athletic wrote a great story earlier this year that chronicled the beat-by-beat developments that led to Cabrera ending up in Detroit, but the upshot is this: The Marlins were cheap and wanted to slash payroll, and the Tigers jumped at a once-in-a-lifetime opportunity.

So on Dec. 5, 2007, the Marlins sent Miguel Cabrera and Willis to Detroit for pitchers Miller (No. 10 overall prospect according to Baseball America), Dallas Trahern, Frankie De La Cruz and Burke Badenhop, outfielder Cameron Maybin (ranked No. 6 by Baseball America) and catcher Mike Rabelo.

Note: Willis had finished second in the NL Cy Young voting just two years prior, but he’d really struggled in 2007 and there were significant concerns around the game that he’d fallen off. That ended up proving true. This is an important aspect when comparing these two trades because at first glance it’s like, “You can’t compare them because Dontrelle was Dontrelle.” But at the time of the trade, he wasn’t really Dontrelle anymore. A year of pre-free agency Dontrelle then was probably worth slightly less than two months of good Josh Bell.

Hindsight is 20/20, and now we know that Maybin’s swing-and-miss issues would limit his potential and that Miller wouldn’t develop into a good big-leaguer until he moved to the bullpen after leaving Florida. But at the time, they were viewed as can’t-miss superstars.

The rest of the package was underwhelming, even at the time. Badenhop had a solid eight-year career as a non-leverage reliever, but he wasn’t on any top 10 Tigers prospect list. De La Cruz was a promising but low-control bullpen arm who threw gas. Rabelo was just a backup big-league catcher. Trahern was a high-contact, sinker, ground-ball guy who ended up having Tommy John surgery and never made the bigs.

Looking back, it’s an absolute disaster for the Marlins. The players they received provided just 1.2 WAR over their entire Marlins tenure. Maybin was the only player to produce a positive WAR (2.7); the four other players combined for a minus-1.5 WAR.

Cabrera would go on to put up 50.1 WAR (and counting) for the Tigers.

Per FanGraphs, that’s five of the Padres’ top eight prospects, plus a valuable big-league bat the Nats will likely flip for youth at some point this offseason. At just 21 and 23, respectively, Abrams and Gore have already reached the big leagues but still have a ton of development left. Susana throws a million miles an hour. Hassell is a high-floor bat with good decision-making at the plate. The 19-year-old Wood might be the best of them all; he’s a 6-foot-7 center fielder with speed and top-of-the-charts raw power.

There’s no good way to trade Juan Soto the Nats’ front office letting the roster get so thin after winning in 2019 is the true failure here but early reports are that D.C. did as well as could have been expected in flipping their superstar. Even if two or three of their new guys never contribute at the big-league level, it’s likely there’s at least one future All-Star in this bunch.

The Cabrera trade turned out to be catastrophic for the Marlins because their motivations in trading him were completely misplaced. The 2007 Marlins roster was flawed, but it had some talented players to build around in 23-year-old Hanley Ramírez and 27-year-old Dan Uggla). The 2022 Nationals, and by proxy the 2023 Nationals, look borderline hopeless. There was no path to contention. That gave the team more leverage in swapping Soto than the Marlins had in 2007.

One day, Cabrera will have a Detroit “D” on his cap on his Cooperstown plaque, something that seemed inconceivable after his 2003 World Series run with the Marlins. At one point, Soto looked destined to be a National for life he’s the type of player you can’t let get away, right?

But if the Padres can lock up Soto for the long term like the Tigers did with Cabrera, perhaps one day he’ll be donning the San Diego hat in bronze on his Hall of Fame plaque.

Jake Mintz is the louder half of @CespedesBBQ

and a baseball writer for FOX Sports. Hes an Orioles fan living in New York City, and thus, he leads a lonely existence most Octobers. If hes not watching baseball, hes almost certainly riding his bike. You can follow him on Twitter @Jake_Mintz

Kim Cattrall has moved on from ‘Sex and the...

Pope set for historic apology for school abuses in...

The scene in California’s battlegrounds

A statue of a trailblazing Black educator gets a...

Some rugby players in Australia refuse to wear LGBTQ...

Web.com has made a major move into the ecommerce...

Kamala Harris has become a ‘glorified content moderator’ for...

This little known iPhone trick will help you become...

Violence Against Women Act renewed as part of omnibus...

Google Sheets are about to become even more chaotic...

Which mini dash cam should you buy?

Leah Remini replaces Matthew Morrison as ‘So You Think...