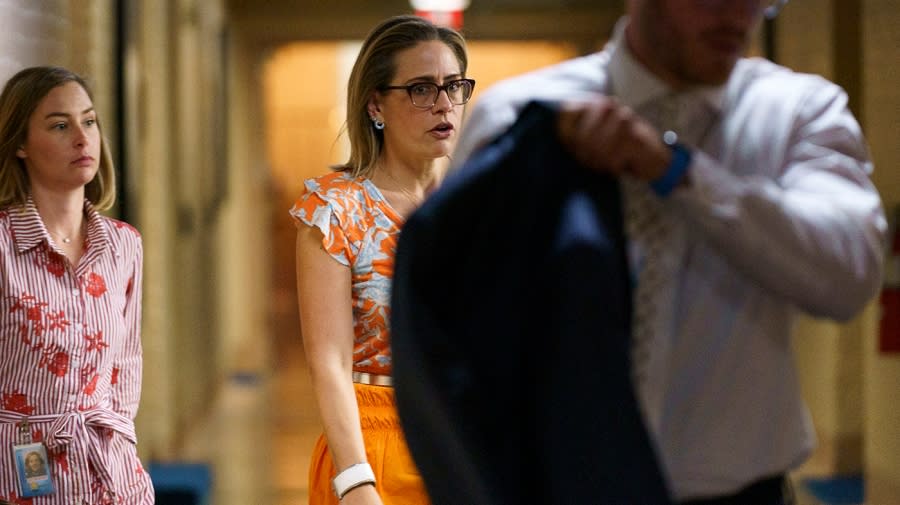 Sen. Kyrsten Sinema (D-Ariz.) is not yet on board with the sweeping tax reform and climate package that Senate Democrats hope to vote on this weekend and wants to make changes to the bill to soften the tax hit on manufacturers, according to sources familiar with the negotiations.

Senate Majority Leader Chuck Schumer (D-N.Y.) is gambling that he can win Sinema over to support the bill by the time senators vote on proceeding to the budget reconciliation package sometimes Saturday afternoon.

Sinema wants to exempt U.S. manufacturing companies from the 15 percent corporate minimum tax that Schumer and Sen. Joe Manchin (D-W.Va.) agreed to ahead of unveiling the Inflation Reduction Act last week, according to multiple people familiar with issue.

Thats a tough problem to solve because the 15 percent corporate minimum tax is the biggest revenue generating proposal in the package, raising an estimated $313 billion over ten years.

Exempting manufacturing companies from the book minimum tax would cost about $45 billion over ten years, according to one of the lower Senate estimates being floated. Book is a tax accounting term that in effect would make it harder for companies to avoid declaring profit and therefore increase what they would pay in taxes.

Shes not there yet, said one person familiar with the negotiations, who cited her objections to the corporate minimum tax and closing the carried interest loophole.

Sinema declined to answer reporters questions when she emerged from her Capitol basement hideaway Thursday afternoon.

A spokeswoman for Sinema declined to comment on any of the details of the negotiations, saying that her boss would wait for the Senate parliamentarian to completely review the legislation.

Schumer told colleagues they will vote on a motion to proceed to the budget reconciliation package Saturday, a sign that he feels optimistic about working out a deal with Sinema.

Other Senate Democrats also feel optimistic. But theyre also anxious the talks could fall apart at the last minute.

The corporate minimum tax thats emerging as the biggest obstacle is also a big revenue generator in the bill. Establishing a carveout for manufacturers would substantially reduce how much money from the bill would go toward reducing the federal deficit, which is a major priority of Manchins.

Sinema is coming under heavy pressure from business leaders in Arizona to oppose the corporate minimum tax.

In the face of record-high inflation, supply chain backlogs and a major labor crunch, now is not the time to hammer manufacturers with new taxes, said Arizona Chamber of Commerce and Industry president Danny Seiden.

Arizona job creators will continue to urge lawmakers to reject this manufacturers tax and instead focus on policies that encourage job growth and strengthen our state and economic competitiveness, he said.

The Schumer-Manchin deal would establish a 15 percent minimum tax for corporations with more than $1 billion in annual profits though it would exempt green-energy and microchip manufacturing tax credits from getting wiped out by that minimum tax threshold.

Full expensing under the Tax Credits and Jobs Act is due to phase out over the next four years.

Sinema told the Arizona Chamber of Commerce in April that she would be unwilling to support any tax policies that would put a break on economic growth, or stall business and personal growth for Americas industries.

She made clear to senior White House officials and Senate Democratic colleagues early during the negotiations over the budget reconciliation bill that she would not support increasing the 21 percent corporate tax rate, a key achievement of the 2017 tax reform law.

The entire country knows that I am opposed to raising the corporate income tax. That was true yesterday and it is true today, Sinema told Arizona Chamber of Commerce earlier this year.

Republican critics of the Schumer-Manchin deal say that implementing a minimum tax rate that prevented full and immediate expensing of capital expenditures will effectively increase taxes on many corporations.

Sen. Rob Portman (R-Ohio), who worked closely with Sinema in drafting last years $1 trillion bipartisan infrastructure law, warned in an op-ed for The Wall Street Journal that it would essentially place a tax on manufacturing.

He pointed out that the bipartisan Joint Committee on Taxation estimates that nearly 50 percent of the new tax would hit manufacturers.

Sinemas request for $5 billion in drought resiliency funding could also imperil passage of the bill depending on how its structured, especially if it means Arizona will get more water from the Colorado River.

We are facing historic drought in Colorado. The state has had the worst wildfires in our states history. There is very little water in the Colorado River. And I think it would be great if we could do something on drought but it has to be something that meaningfully improves the situation in Colorado and in the upper basin of the Colorado River, said Sen. Michael Bennet (D-Colo.), who is up for re-election in November.

He said any drought resiliency language must be provide an enduring solution to the problem otherwise its not worth doing,

Senate Democratic senators are hopeful that Schumer can work the same magic he did with Manchin and persuade Sinema to support the bill. But they arent making any predictions about how shell vote Saturday afternoon when the Senate considers whether to begin debate.

Youll have to ask her. I have a very optimistic feeling about it but thats her call, said Sen. Tim Kaine (D-Va.).

For the latest news, weather, sports, and streaming video, head to The Hill.

NCAA game breaks out into fight after altercation between...

Mom of U.S. veteran held in Ukraine speaks to...

My rant about Sean Caddle and campaign finance

On The Trail: The new American malaise

A New President in the Philippines

Iran orders US to pay compensation for slain nuke...

Author Michelle Tea on new book, “Knocking Myself Up”

‘My Family and I are Searching For Lost Treasure’

1 dead, others injured after bus overturns on NJ...

Ridvan Yilmaz: Rangers are in negotiations to sign Turkey...