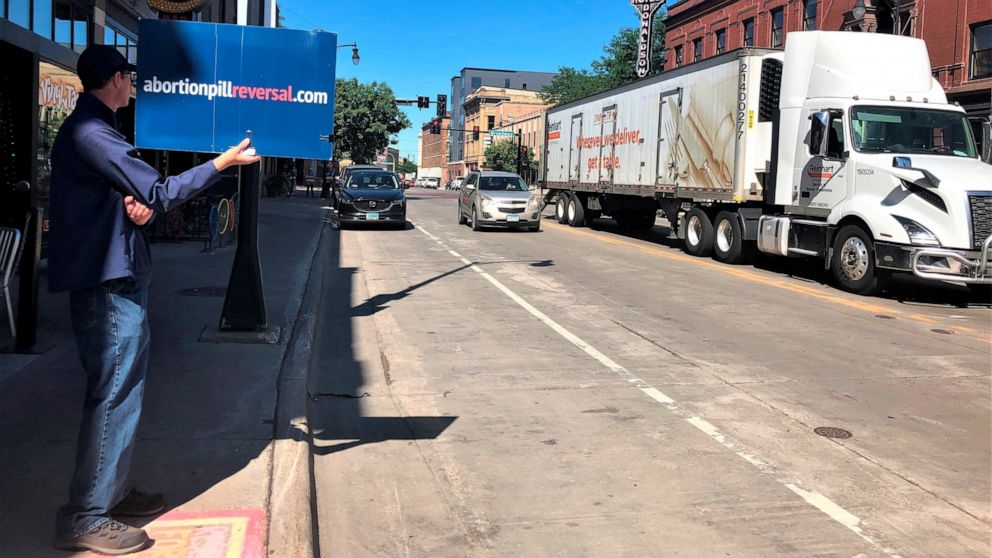 MOORHEAD, Minn. — The owner of a North Dakota abortion clinic that faces closure this month was directing traffic and deliveries Friday at its planned new location a few miles away in Minnesota.

The Red River Women’s Clinic, which has been operating on a busy downtown Fargo street since 1998, will close that location on Aug. 26 unless a judge blocks a North Dakota trigger law banning abortion. In the meantime, a move is already underway just over 2 miles (3 kilometers) away to a three-story brick office building in the middle of a commercial area.

Clinic owner Tammi Kromenaker declined to talk about details of the Moorhead facility, promising a statement later during what she said was a busy day of deliveries scheduled. As she spoke, a moving truck pulled up on the street and a junk removal truck drove through a parking lot.

Some abortion rights supporters in North Dakota still hope Kromenaker’s clinic can prevail in a lawsuit alleging that abortion is protected by that states constitution. No hearing is yet scheduled.

Though Kromenaker previously said she would move only if litigation fails, the statement she gave later Friday suggested she’s fully committed to relocation.

Red River Womens Clinic has found our new home, she said. We could not be prouder to be able to continue to provide abortion care to our community and the region. This has not been an easy undertaking.

She added: As the lights go out on legal abortion in North Dakota, we want to assure everyone that Red River Womens Clinic is here to stay. Abortion care will continue to be available in our region.”

The clinics relocation has been boosted by $1 million in GoFundMe donations.

Kromenaker said she looked for a new location to rent or buy for more than a year and that she ultimately had to buy an office building larger than needed. She said it would be up to other tenants whether they stay. She said renting space to compatible tenants would give the clinic long-term financial stability.

Kromenaker has declined to say when the new clinic would be ready, but has said patients will see no interruption in services.

Minnesota Republican state Rep. Tim Miller, the director of an anti-abortion coalition that opposes the new clinic, told The Associated Press he plans to challenge the city on its zoning and planning rules.

I just find it hard to believe that that an office building can suddenly become a clinic where theyre doing abortions, Miller said. That just seems too simplistic for me.

Destini Spaeth, the volunteer leader of the North Dakota Women In Need, which helps patients pay for travel costs, said the Moorhead facility will be the clinic that the community built.

In the end, I think people needed somewhere to put their action and their rage into something good, Spaeth said. And I know we all we all felt so helpless. And this felt like something tangible that we could see and make possible.

Bishop accused in lawsuit of abusing child decades ago

Turbulent Cup of Nations to finally get underway in...

War in Ukraine: Live-streaming music from a Kharkiv basement

Heat wave to hit Pacific Northwest a year after...

Johnson will lead Tories at next election, says Brandon...

How to find COVID vaccines for children under age...

Camilla Turns 75: From ‘Radioactive’ Other Woman to Future...

Brokering in Brooklyn: Schumer’s on the horn

Venezuela to support reconstruction of Cuban port damaged by...

Liverpool chief executive hits back at comments by France’s...

The worst fires in New York City history have...

Kid Rock doubles down on drunk rant against Oprah,...

Romanian inflation rises below expectations to 15.05% y/y in...

Reaction to the BOE, Monkeypox and US Jobs

Scientist apologizes for photo of sausage he claimed was star