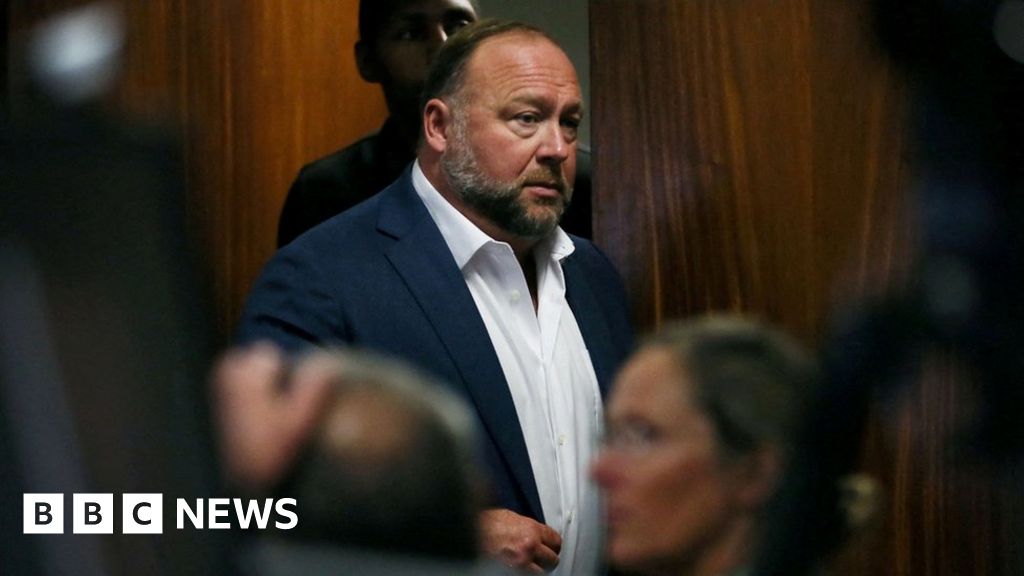 For years, bombastic radio host Alex Jones has peddled a stream of conspiracy theories in his distinctive loud, gravelly voice to an audience of millions.

Among the most incendiary falsehoods he ever circulated was that the 2012 shooting at Sandy Hook Elementary School in Connecticut, which left 20 children and six adults dead, was completely fabricated by the US government in a plot to strip American citizens of their guns.

After a two-week defamation trial full of twists and turns, a jury in Austin, Texas, has ordered Jones to pay nearly $50m (£41m) in compensatory and punitive damages to the parents of a boy killed in that attack.

Here are five key moments from the two-week trial.

Among the viral moments that emerged from the proceedings was one that left Jones visibly dumbfounded, when it was revealed that his lawyer had accidently sent two years of potentially damaging text messages from Jones’ phone to Mark Bankston, a lawyer representing the parents.

According to Mr Bankston, Jones had sent texts about Sandy Hook, contradicting trial testimony that he hadn’t mentioned the shooting in any private communications. Jones said that was the reason he hadn’t provided his phone records to the court.

Jones’ claims prompted Mr Bankston to ask him: “Do you know what perjury is?”

The 6 January congressional committee, which is investigating the Capitol riot, has now requested access to Jones’ text messages, which Mr Bankston said he intended to provide to the committee unless the judge intervenes. The committee had previously requested records and a deposition from Jones about his role in the riot, which saw supporters of former President Donald Trump storm the US Capitol on 6 January 2021.

Media caption, Watch as Alex Jones is told his text messages were sent to opposing lawyers by mistake

Earlier this year, companies owned by Jones, including his right-wing conspiracy website Infowars, filed for bankruptcy.

In the US, declaring bankruptcy provides a route for companies to remain in operation and negotiate their debts, with settlements overseen by the court. It puts a hold on other litigation.

Challenging his bankruptcy claims, Mr Bankston said Jones’ texts revealed that in 2018 his companies were still netting approximately $800,000 each day.

That information came via an email from an Infowars employee to Jones, who had earlier testified that he did not use emails at all.

Jones was questioned about the Infowars online store and the authenticity of the products his business sells to customers, which include diet supplements, health and wellness products, gun paraphernalia and survivalist equipment.

In court, Jones admitted that vitamin supplements listed on the Infowars store had not been certified for use by the US Food and Drug Administration (FDA).

When asked why his supplements did not have FDA approval, he claimed the products underwent rigorous checks and were “the best out there”.

During the Covid-19 pandemic, Jones falsely claimed on his show that some of his products, including a “supersilver whitening toothpaste” and a “superblue silver immune gargle”, could stop or treat Covid, resulting in an FDA warning letter sent to him and Infowars for selling “unapproved and misbranded” products related to the pandemic.

Forensic economist Bernard Pettingill testified on Friday that Jones’ businesses were worth somewhere between $135m and $270m , a claim Jones and his defence team deny.

One of the most tense moments came when a plaintiff – the mother of a six-year-old boy killed at Sandy Hook – addressed Jones from the witness stand.

Scarlett Lewis told the radio host that she was not an actress or part of the “deep state”.

She said her son, Jesse Lewis, and the other children who died at the primary school were real. She added that Jones’ claims had led to 10 years of “hell”.

Jones acknowledged during the trial that the Sandy Hook attack was “100% real” and apologised for having “hurt these people’s feelings”.

“I know you believe me, yet you’re going to leave this courthouse and you’re gonna say it again on your show,” Mrs Lewis said, looking directly at Jones, as he shook his head.

Judge Maya Guerra Gamble had several tense exchanges with Jones during the trial, reminding him at one point that he had to tell the truth under oath.

“It seems absurd to instruct you again that you must tell the truth while you testify… This is not your show,” Ms Gamble said.

On another occasion, she told Jones to spit out a piece of gum. Jones denied he was chewing any gum, saying that he was sticking his tongue into a gap where he had had a tooth removed.

“Would you like me to show you?” Jones asked the judge, prompting her to respond: “I don’t want to see the inside of your mouth.”

During the proceedings, Mr Bankston asked Jones if he had shown pictures of the judge “on fire” on his show, which Jones denied, resulting in the lawyer putting up a picture broadcast on Jones’ show which depicted Ms Gamble in flames alongside Lady Liberty.

Jones’ claims about the jury were also brought up by the parents’ defence team.

Footage was played of Jones saying on his show that the jury was made up of “extremely blue collar folks”, adding that “half that jury panel does not know who I am”. What happens in divorce when digital bullying is in...

France to give queen Republican Guard horse for her...

The Samsung Galaxy Z Fold 4 will have some...

COVID-19 health emergency could be over this year, WHO...

Earnings to the rescue? – Reuters.com

GOP scramble to figure out what Trump legal drama...

Noem says doctors, not pregnant mothers, should be prosecuted...

Former NFL player indicted for murder of his girlfriend,...

Firms must choose between Russia and West, says US

Laura Ingraham: Democrats are dangling a lot of ‘shiny...

Accusations of racism and abortion politics

Law in memory of PC Harper comes into force...

Ukrainian businessman moves from the boardfroom to the battlefield...

Tourists flock to Puerto Rico beach unaware that it...