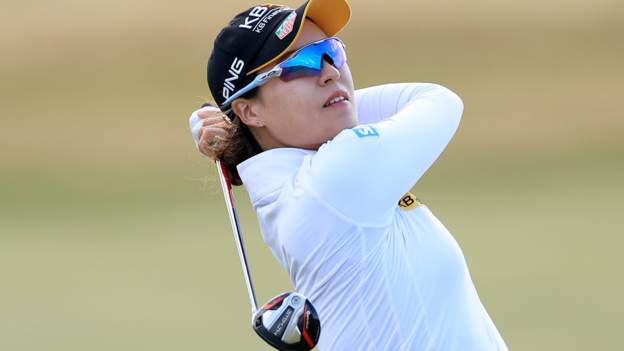 South Korea’s In Gee Chun leads by one shot at the halfway stage of the AIG Women’s Open at Muirfield and remains on course for a fourth major title.

South Africa’s Ashleigh Buhai and Sweden’s Madelene Sagstrom both trail the leader by one shot.

However, 27-year-old Chun said she was also motivated by a personal wager with her caddie.

“Before the start of the tournament my caddie Dean and I talked about the course and had a little bet,” she said.

“If I have a bogey-free round he’s going to buy me dinner and pay me $100 each day, so before each round it’s like setting another goal.

“I think that mindset helped a lot on the course; I had two bogeys over the last two days but I want to keep trying for a bogey-free round.”

Buhai looked as if she may take the overall lead as she went through the first nine holes in an impressive 30, including an eagle at the fifth, but a bogey on the final hole saw the 33-year-old finish the day in joint second.

She matched the 65 posted by last year’s joint runner-up Sagstrom, while overnight leader Hinako Shibuno followed her opening 65 with a 73 to fall four shots off the pace.

Scotland’s Louise Duncan, who only turned professional two weeks ago, carded a 73 to slip back to two under alongside Ireland’s Leona Maguire.

English trio Jodi Ewart Shadoff, Charley Hull and Mel Reid are all a stroke further back.

From alternative fuels to rationing trips: A guide to...

Girls think physics is for white boys only, MPs...

George North: Ospreys and Wales back in line for...

Fed committed to getting inflation to 2% target, Barkin...

Capture Your Moment Coming Soon to All Walt Disney...

17-year-old fatally shot in chest near his high school:...

WHO chief scientist: pandemic has not ended as more...

Google and Facebook reportedly struck a secret deal to...

Facebook’s lobbying spending surged to a record in 2021

US Navy warship challenges Chinese territorial claims in the...

Boris Johnson returns to No 10 after minor sinus...

US repatriates suspected ’20th hijacker’ of 9/11 from Guantanamo...

Judge will soon decide whether to block Florida’s 15-week...

Tips and Tools to Help You Stick to Your...

Christian Bale would return to playing the role of...

Iran Says Explosions in Country’s West Were Caused by...