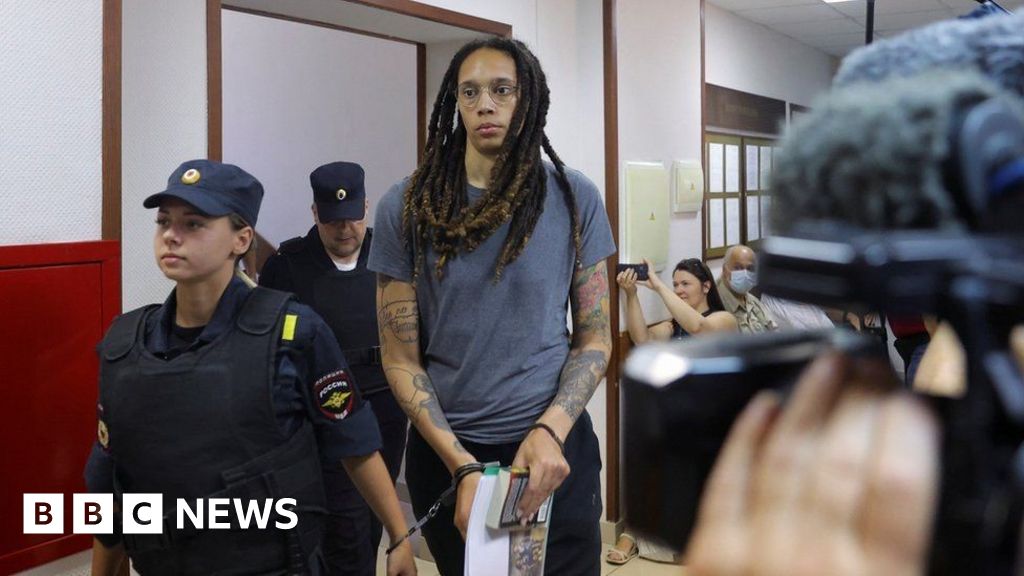 There is growing alarm over the situation at Europe’s largest nuclear power plant.

Zaporizhzhia, in south-east Ukraine, was seized by Russia early in the conflict, but kept its Ukrainian employees.

Both sides blame each other for shelling there, which Ukraine says damaged part of the facility.

Ukraine’s nuclear operator warned of the risks of radioactive leaks, although none so far have been detected. The UN’s nuclear watchdog has pleaded to be allowed access.

Civilians in the area said Russia was using the site to launch attacks, confident that Ukraine would not fire back.

“You don’t want to shoot there,” as one told the BBC.

Basketball star Brittney Griner was arrested on drugs charges in Russia just before the war, with the case straining already tense relations between Russia and the US.

The US has urged Moscow to accept a deal to free Griner, who has been sentenced to nine years in a Russian prison.

The double Olympic winner was convicted of possessing and smuggling drugs after admitting to possessing cannabis oil.

White House national security spokesman John Kirby said the US offer was “a serious proposal”, but gave no details.

One man who may benefit from this is Russian arms trafficker Viktor Bout, who is reportedly being considered as part of the deal.

Three more ships loaded with grain have sailed from Ukrainian ports – one from Odessa bound for Ireland, and two others from Chornomorsk towards the UK and Turkey.

The vessels are carrying more than 50,000 tonnes of produce.

Image caption, The vessels are carrying more than 50,000 tonnes of produce

Moscow and Kyiv agreed in Istanbul last month to resume shipments from Ukrainian ports, easing Russia’s blockade of the Black Sea for the first time since it invaded its neighbour in February.

The first grain shipment on Monday was cleared for travel through the Bosphorus following an inspection by officials from Russia, Ukraine, Turkey and the UN.

Russia and Ukraine are major global suppliers of wheat and other grain, and the blockade has caused a global food crisis.

Read more: Why does the world need grain to be shipped from Ukraine?

The head of the Russia-installed administration in the occupied Kherson region in Ukraine is being taken to Moscow due to an unspecified illness.

Vladimir Saldo has been moved to the Sklifosovsky research institute “where highly qualified medical assistance will be provided to him”, his press service announced.

The southern city, which had a population of 290,000 before the war, is administered by Moscow-backed officials since falling early on in the war.

But Ukraine is waging a campaign to retake control of the city.

Image caption, A seven-storey high portrait of Anna Domashyna, who stayed in Ukraine to help people while others fled, adorns a car park near Wembley Stadium

The “real beauty of Ukraine and its people” is being showcased in a public art display outside Wembley Stadium.

Visions of Home is a collection of photographs, installations and digital works by artists from the country.

It forms part of an annual art trail just outside Wembley, which is visited by millions of people a year.

The exhibition aims to showcase a “resilient and hopeful country”, and to keep the war in Ukraine in the public conscience, curators said.

Students cheer on classmate with Down syndrome

Your Evening Briefing: Russia Doubles Down on Destroying Ukraine

How Did Democrats Become So Out of Touch With...

This is the one feature that the perfect running...

Asia shares slide across board amid rate hike, COVID...

The conditions are ripe for talking peace. Biden should...

G7 summit kicks off under shadow of Ukraine war,...

Warrington Wolves: Why this rugby mascot drove off with...

US Coast Guard rescues 3 US sailors in Atlantic...

Biden says meeting with Kim Jong Un would depend...

Apple is already having to fix the worst part...

Maine 2021 lobster harvest most valuable ever for state

Snapchat finally comes to the web

Taliban and US officials to meet amid quake relief...

Is India Letting Its Covid Guard Down?

Officer once beaten by colleagues while undercover will be...