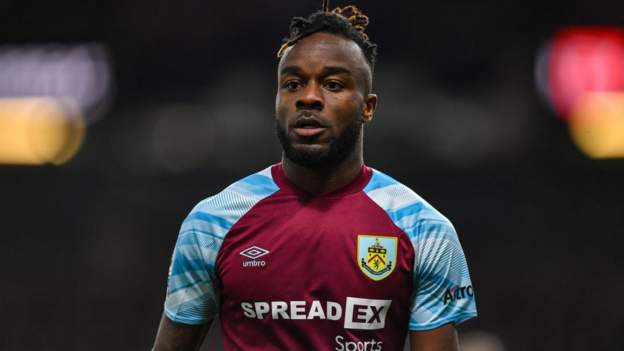 Cornet scored nine goals in 28 appearances in all competitions for Burnley last season.

West Ham have signed Ivory Coast winger Maxwel Cornet from Burnley on a five-year contract for an undisclosed fee after paying his £17.5m release clause.

He was Burnley’s top scorer last season with nine goals in 28 appearances as the Clarets were relegated from the Premier League.

Cornet spent seven and a half seasons at Lyon, playing 252 games and scoring 51 goals for the Ligue 1 club.

Cornet, who can play as a left-winger, wing-back or full-back, has a further one-year option on his contract.

“It’s a new step for me to join this big club and I’m really happy to be here, to be part of the project for the club. I’m just excited to start,” said Cornetexternal-link

, who has scored six goals in 29 appearances for Ivory Coast.

“Everyone knows the level here in the Premier League is very high and I want to play here for that, so I’m really happy to be here for the next stage in my career.”

Hammers boss David Moyes said: “He is a versatile player with good experience, both in the Premier League and in European football, and will add strength and quality to our squad.

“He made a big impact with his performances for Burnley last season and he has impressed me with his desire to improve and challenge himself further here at West Ham.” Chicago students returning to school after teachers union and...

US and Europe weigh plans for Ukrainian government in...

Bill Clinton says he couldn’t have done anything to...

Michael Lewis on His Journey to Wall Street (Podcast)

Mother of Michigan school shooting suspect worried she was...

‘This crisis will accelerate the energy transition’

China sets sanctions on Taiwan figures to punish US,...

Ahead Of Memorial Day, Americans Step Up For Veterans

Camilla, Duchess of Cornwall talks about marriage to Prince...

Much of northern Yellowstone park to reopen Friday

Technology Can Fix the Climate Mess—but Not Without Help

Best Netflix Movies: the 20 best films you can...