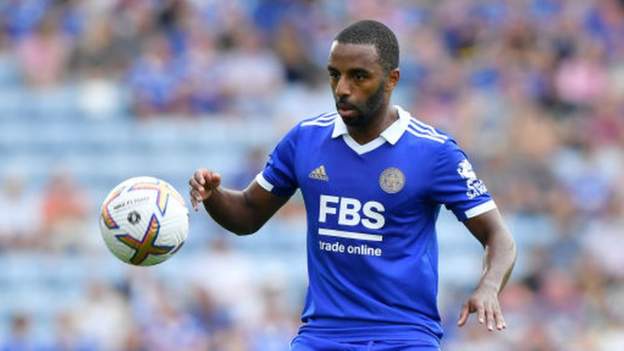 Leicester City full-back Ricardo Pereira will be out for up to six months after having surgery on a ruptured Achilles.

Manager Brendan Rodgers also said winger Harvey Barnes will be out for a few weeks with a minor knee injury.

Both players had to be withdrawn during Sunday’s friendly win against Sevilla.

“It’s such a shame because a lot of our game idea over the summer was based around full-backs and him [Pereira] in particular,” said Rodgers.

“He was looking so good. It’s a massive blow to him. He had his operation last night [Thursday] and he’ll recover now, get strong again and come back better, I’m sure.

Portugal international Pereira’s 2019-20 season was cut short by an anterior cruciate ligament (ACL) injury in March 2020 and the 28-year-old did not return to Premier League action until January 2021.

On 24-year-old Barnes, Rodgers added: “He’ll come back and pick up where he left off because he’s had a really good pre-season.”

Rodgers also said left-back Ryan Bertrand is “still a number of weeks away” from contention because of a knee injury which kept him out for most of last season.

Maddison & Fofana ‘not for sale’

Defender Jonny Evans has been named Leicester’s club captain after the departure of long-serving goalkeeper Kasper Schmeichel for Nice.

There has also been interest in midfielder James Maddison, 25, and defender Wesley Fofana, 21, this summer.

Newcastle United made a second bid for Maddison this week while Leicester are reported to have turned down a bid from Chelsea for Fofana.

But Rodgers said: “These players are not for sale. You don’t want to lose your top players.

“James and Wesley are training well and getting ready for our game on Sunday.”

Over $3M in Fentanyl Found in Spare Tire, Gas...

Fears Over Lockdown Making Children ‘Feral’ and Unable to...

‘Our Father’: How Many Children Does Dr. Cline Have...

Will PSVR 2 be backwards compatible? It better be…

The Assam woman who fought to win back her...

Jamie Lynn Spears says she “took no steps” to...

8 bodies found, may be kidnapped workers from Mexican...

China willing to deepen cooperation with Russia within multilateral...

WHO: Monkeypox won’t turn into pandemic, but many unknowns

Alpine skiing-Swiss Feuz set for downhill gold ahead of...

Amazon vacuums up iRobot for $1.7 billion

Jobs report: Unemployment drops to its lowest rate in 50 years