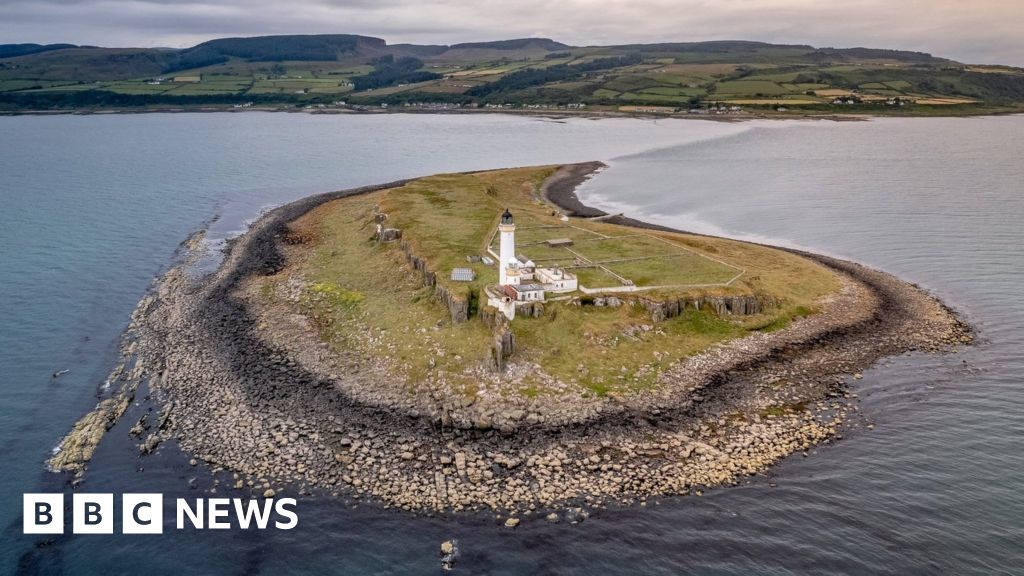 The isle of Pladda, off the coast of Arran, includes a five-bedroom house, a helipad and lighthouse dating back to the 1790s.

It has an asking price that could buy a three-bedroom flat in Glasgow or Edinburgh. It is well below the average price of a London property at £536,000.

The 28 acre island has been empty for several years and needs renovation before it can be lived on again.

Pladda was sold by the Arran Estate 30 years ago to fashion designers Derek and Sally Morten – its current owners.

Image caption, The buyer will get a five-bedroom house, walled garden and a stone jetty.

Image caption, Ailsa Craig looms on the horizon over Pladda

Listed with Knight Frank, the property is 31 miles from Glasgow, and can be reached via boat from Ardrossan on the mainland.

More than 100 species of birds have been recorded on the island.

The island’s lighthouse has been automated from Edinburgh since 1990.

Views stretch across the Kintyre and Ayrshire coasts, to Ailsa Craig and even Northern Ireland on a clear day

The sale comes at a time when house prices recently reached a record high. The average UK house price reached £294,845 in June.

Once, twice, sold? Rome villa with Caravaggio up for...

Desperate for the new MacBook Air? We’ve got some...

Zelenskiy Visits Troops Near Kharkiv in Rare Foray From...

‘No obvious reasons’ why teen killed 3 siblings, himself

Trump No Longer in Contempt of Court, Must Pay...

The Fed must control Inflation for public safety’s sake

Manchester City: Phil Foden one of four players to...

A 7th member of the Haitian delegation at the...

Taiwan tensions: China halts co-operation with US on key issues