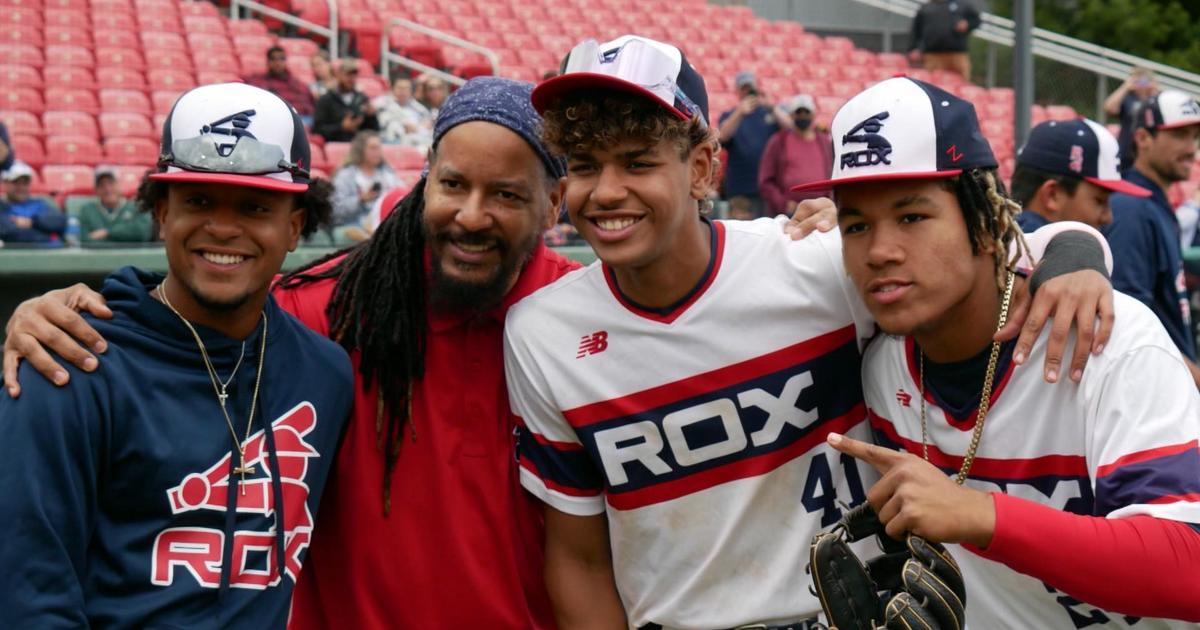 Along with the typical minor league antics, fans are flocking to the park, about 25 miles south of Boston, for a chance to grab an autograph from some legendary names.

“I have Manny’s, Pedro’s and D’Angelo’s,” one young fan said.

Just 19 years old and on his way to junior college in Florida this fall, Manny Ramirez Jr. is treated like a celebrity in Brockton, despite an injury that’ll keep him out the rest of the season.

“It’s the best thing coming here because you could you could go 0-3 with three strikeouts and the fans still love you,” Ramirez Jr. told “CBS Saturday Morning” co-host Dana Jacobson. “This is, like, something that only happens once in a lifetime. So it’s, it’s amazing to see.”

“Honestly, it feels like a movie, I’m not even gonna lie to you,” Martinez Jr. said. “Like, it feels so fake, like, wait this is happening?”

“It sounds planned, but it really was not,” Martinez Jr. said. “I showed up here last year and I was the only one. I ended up coming back and boom, we got a whole new dance crew.”

“I think of your dad in the final out,” Jacobson told Foulke. “Do you have a moment where you remember first seeing that?”

“I just really remember a picture of us together on the field and after the World Series and it was me crying and I’m in his arms,” Foulke said. “It’s just kind of something I’ve grown up with.”

“Jose, what is the best thing about having a dad who has been a major league player?” Jacobson asked.

“The knowledge that it comes with,” Jose Martinez said. “He just knows exactly the right steps to take, what I gotta do. He’s just a great partner.”

And the hardest thing?

The dads have all spent time around the club this season, offering tips and sharing stories from decades at the pinnacle of the sport.

When we visited, Keith Foulke was giving the grounds crew a hand.

“How has it been for you to help groom not just your son, but some of your former teammates’ sons as well?” Jacobson asked him.

“It’s been incredible,” Foulke said. “Being a big league ball player is great, but there’s a lot of struggles involved. If we can make a young athlete’s path a little bit easier, make him a little bit wiser on the field and off the field, you know that’s kind of being that mentor and we take pride in that.”

The kids say there are also ups and downs to having their dads hanging around so much.

“It’s really fun, but it also sucks a lot,” Kade Foulke said. “He really helps me, you know, with every aspect of the game, but at the same time, he’s pretty much always on my case, you know.”

“The other day, like, I had Kade’s dad try to help me work on some, like, throwing motions and I had Manny’s dad come and help me in a cage and he kind of saw some things that my dad was trying to explain to me and wasn’t articulating in a way I understood,” Jaden Sheffield said.

“Sometimes you don’t like to listen to your dad,” Martinez Jr. said.

“What really keeps it, like, human is the fact that we can make jokes about it,” Martinez Jr. said. “Just keep it very normal because we’re people.” Albertsons Jumps as Grocer’s Board to Review ‘Strategic Alternatives’

Ukraine Nuclear Plant: Why Zaporizhzhia Is No Chernobyl

The Chinese label subverting masculine stereotypes for a ‘gender-fluid...

Armando Broja: The Ronaldo-inspired youngster who is soaring at...

Biden to visit Poland this week

Space telescope’s image of star gets photobombed by galaxies

Nadal steps over the mark as he gives Sonego...

The bloody legacy of Rodrigo Duterte

California’s minimum wage projected to rise to $15.50 under...

Pair rescued after fall into chocolate tank at candy...

The Jews dressing as Muslims to get around a...

Star Wars: Rogue Squadron might be getting a remake

HBO just canceled this comedy, despite its 100% Rotten...

Schools are completely disrespecting parental rights with their children:...

Putin claims he was ‘forced’ to invade Ukraine

Fetterman to hold first campaign event since stroke next Friday