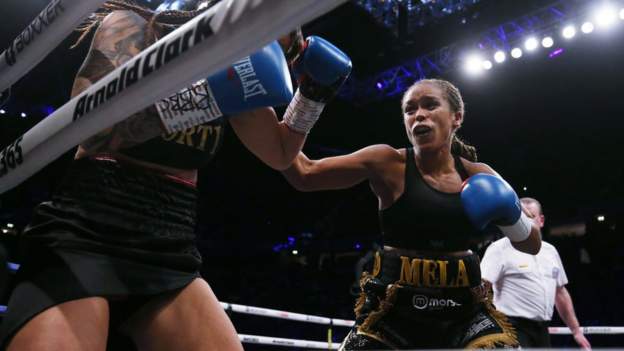 Natasha Jonas will bid to become a unified world champion against Sweden’s Patricia Berghult on 3 September in Liverpool.

Jonas, 38, is the WBO super-welterweight champion and fights to add Berghult’s WBC title to her collection.

Berghult is unbeaten in her 15-fight career, ten years Jonas’ junior and has a win over Jonas’ British rival and fellow world champion Hannah Rankin.

Jonas will fight in her home city for the first time since 2019.

The Liverpudlian was hopeful of facing Scotland’s WBA champion Rankin in London on 10 September on the undercard of Savannah Marshall’s undisputed clash against Claressa Shields, but the domestic rivals were unable to agree fight terms.

That fight remains in the works should Jonas win the WBC title with Rankin expected to return to action before the end of the year.

Jonas has 11 wins, two losses and a draw in her career so far and achieved her long-held dream of becoming a world champion in February when she spectacularly knocked out Chris Namus.

Jonas has twice fallen short in world title fights and Boxxer promoter Ben Shalom said he was eager to reward the Briton with a homecoming bout after her efforts.

“Tasha is one of British boxing’s trailblazers,” Shalom said. “She was our first world champion signing – and she fully deserves this great opportunity on home soil.

“And it is a great fight against the WBC champion Berghult, who is unbeaten and will be looking to upset the home fans.

“Tasha is a hugely popular figure on Merseyside and she will be backed by thousands on the night.

“The atmosphere at the M&S Bank Arena will be electric – and just what Tasha needs as she bids to become the unified world champion.” Milan to turn off fountain spigots as drought bakes...

Switching to Annual Subscriptions Can Really Pay Off

Covid-19: North Korea claims to have recovered from outbreak

Man Driving With Mom Leads Police On a Car...

Two people were killed and three are missing after...

Air Canada Is Left Behind as Nation’s Airports See...

When business aligns with activism – The Hill

White House Hits Back at Donald Trump for Praising...

Group trying to disbar lawyers who worked on Trump’s...

Jason Momoa apologizes after taking pictures inside the Sistine...

I Can’t Stop Procrastinating At College—What Should I Do?

Biden goes for bike ride at the beach as...

Adobe Acrobat may be quietly sabotaging your antivirus

EXPLAINER: A look at West’s escalating sanctions on Russia