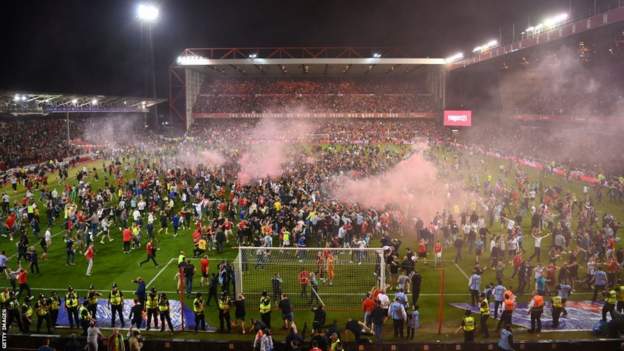 Nottingham Forest have been charged by the Football Association after their fans invaded the pitch following their Championship play-off semi-final last season.

“Nottingham Forest has been charged with a breach of FA Rule E20,” an FA statement read.

“It is alleged that Nottingham Forest FC failed to ensure that its spectators, and all persons purporting to be its supporters or followers, conducted themselves in an orderly fashion and refrained from using threatening and/or violent behaviour whilst encroaching onto the pitch area, following the completion of the fixture.”

Sheffield United striker Oli McBurnie will stand trial in December over allegations he assaulted a fan during the pitch invasion. Oxford shooting suspect could be witness in parents’ trial

Tear gas or pepper spray used at nightclub when...

Austrian Fossil-Fuel Company to Book Charges Up to $2...

This rare pink diamond may be the largest found...

Have You Seen 200 Million Barrels of Oil Anywhere?

Chloe O’Brien: From pink flamingo darts to the Women’s...

Average long-term US mortgage rates bounce back up to...

Back from the brink: How ‘frozen zoos’ could save...

Watters: Protecting Zelenskyy ‘is priority number one for the...

Apple is giving some US retail workers a pay...

US ambassador says Biden’s remark on Putin was ‘principled...

Millions of Americans in path of major winter storm

Why 100 million Americans could be infected during COVID...

Microsoft Edge update will eliminate and all-too-common frustration for...

New York City is making a multibillion-dollar bet on...

How Digital Assets Might Fit Into the Business of...

Summon the Suit with Products Inspired by ‘Moon Knight’

Biden to tackle Ukraine conflict and U.S. inflation in...

EPA proposes restrictions in fight over Alaska mine

Opinion | The U.S. Should Encourage Russians to Defect

After First Kill's shock cancelation, the showrunner has hit out at Netflix