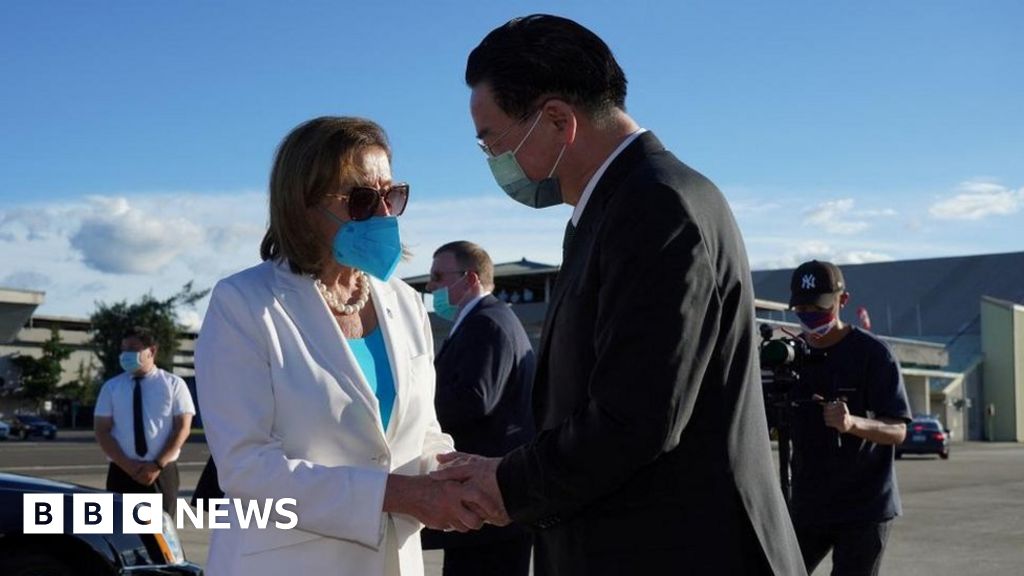 Taiwan’s foreign minister has defended US Speaker Nancy Pelosi’s brief but controversial trip to the island in an exclusive interview with the BBC.

Joseph Wu condemned the large-scale military exercises that China began around the island on Thursday.

He said Ms Pelosi’s visit was “extremely significant” and China’s response would not stop democratic politicians being invited to Taipei.

For the past six years Mr Wu has been the public face of Taiwan’s campaign for greater international recognition. He negotiated Nancy Pelosi’s visit, and he is now dealing with its rather frightening aftermath.

But Taiwan’s foreign minister is not about to apologise. The whole point of Ms Pelosi’s trip was to bring attention to this often forgotten and little understood island.

China sees Taiwan as a breakaway province that will eventually be under Beijing’s control again. However, Taiwan sees itself as an independent country, and any hit of recognition of this by world leaders enrages China – it announced on Friday that sanctions have been placed on Ms Pelosi and her family over the visit.

“For an important leader like Speaker Pelosi to have the opportunity to visit Taiwan is very significant. To raise the profile of Taiwan and to allow the international community to understand that Taiwan is a democracy.”

He is quick to add that it is not Taiwan that has fomented this crisis. It is Beijing, he says, that is trying to change the rules.

The minister is describing a reality that has stood for 73 years, ever since China’s nationalist leader Chiang Kai-Shek fled to Taiwan after losing the civil war.

For decades the two rival Chinese dictatorships, one nationalist (Kuomintang, or KMT), one communist (CCP), stared at each other across the Taiwan Strait, neither strong enough to attack the other.

But in the past 25 years two things have changed. China has got rich, and Taiwan has got democracy.

Democracy has brought a very different political party to power in Taipei.

The Democratic Progressive Party (DPP) is led by President Tsai Ying Wen, and her foreign minister Joseph Wu. They are Taiwanese to the bone, and the values they espouse are not Chinese nationalism, but democracy and human rights.

“In terms of democracy Taiwan is ranked number one or number two in east Asia,” Mr Wu tells me proudly.

“On the index of freedom Taiwan is ranked number one, on economic freedom Taiwan is also at the top. Taiwanese people enjoy democracy, freedom and the value of human rights, that put Taiwan in the democratic world,” he says.

Indeed, Taiwan is classed as “free” by non-profit US-based research organisation, Freedom House (it has classed Chinas as “not free” in 2022) and the Brookings Institute largely applauds the island’s democratization.

The problem for Taiwan is that China is now rich, and with that wealth it has built a huge war machine. Meanwhile, Taiwan has for too long relied on the 100-mile-wide Taiwan straits, and America, to keep it safe.

Joseph Wu admits that is no longer tenable.

“Defending Taiwan is our own responsibility,” he says.

Those are brave words. And Taiwan’s young generation appears to have a far stronger will to fight than their parents.

Image caption, Joseph Wu says he will not stop inviting democratic world leaders to Taipei, despite anger from China

But computer modelling suggests China’s People’s Liberation Army (PLA) would crush Taiwan’s outdated forces in a matter of days. If that is allowed to happen, Mr Wu says it would be a huge mistake that would only encourage China to go further.

He describes China’s behaviour as “expansionist”.

“Look at their behaviour over Hong Kong, or claiming the East China Sea and the South China Sea. It is the typical expansionism of an authoritarian state.

“Countries in this region need to watch out for what China is trying to do. Taiwan is not going to be the last piece in Chinese dream of expansionism.”

With additional reporting by Tiffany Wertheimer.

Sven Botman: Newcastle United yet to agree price with...

Pacific Hurricane Darby weakens as it moves south of...

Court rules Australian minister has no climate duty of...

Listeria outbreak may be linked to Florida, CDC says

Iraq submits complaint to UN against Turkey after attack

US will remove UK steel tariffs ‘when the time...

Amazon’s Proteus robot is fully autonomous and ready to...

‘Mariupol is a graveyard’: Evacuees recount terror of Russian...

Trump app opens to hundreds of testers ahead of...

Methanol found in 21 teens who died in South...

Sizzling Gasoline Market in US Cools With Futures, Pump...

4 Ways to Celebrate World Health Day as a...