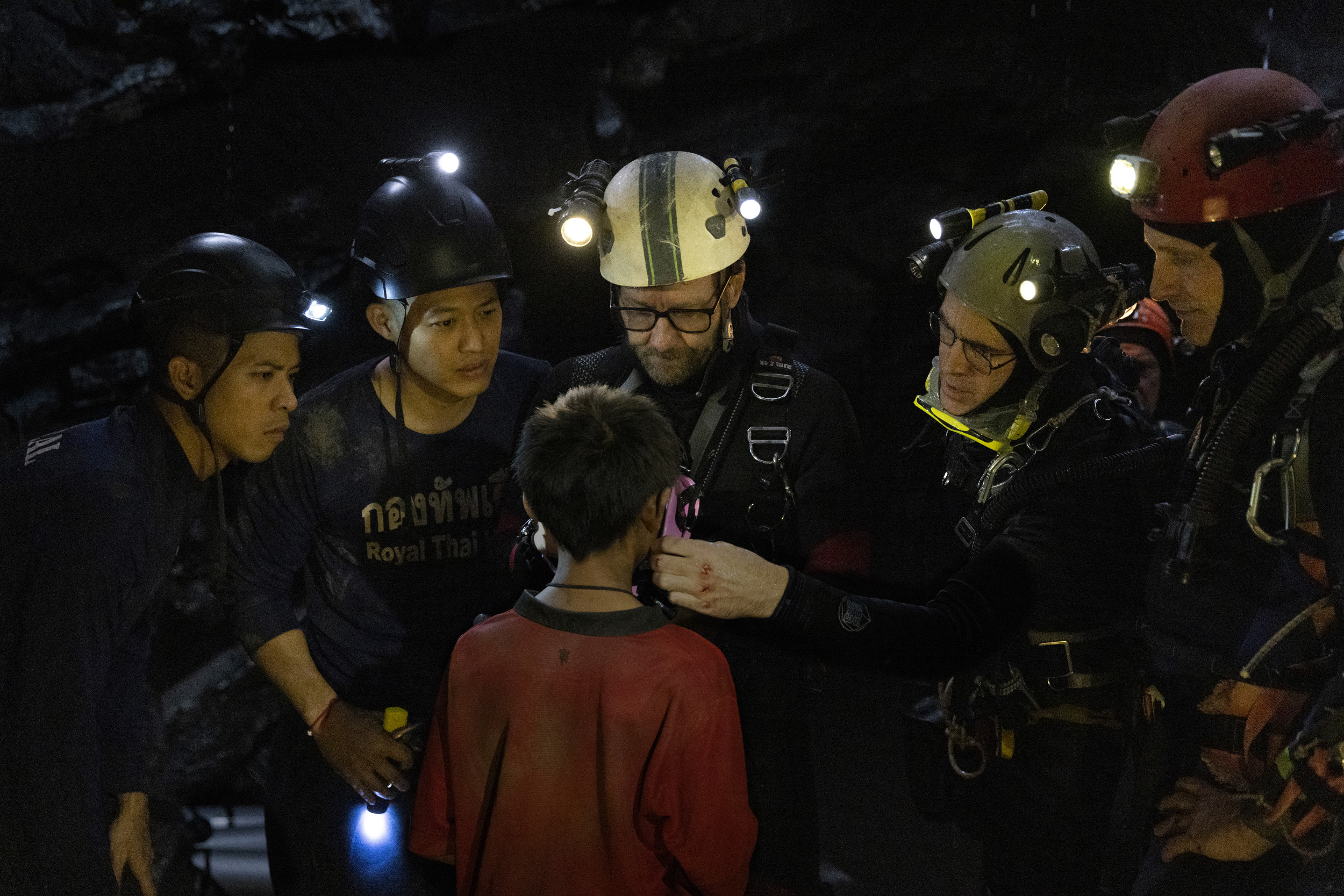 Thirteen Lives dramatizes the 2018 Tham Luang cave rescue, which saw divers work to save 12 boys and their football coach in Thailand after they became stuck in a flooded cave system.

While it’s a recreation of events with A-list stars like Viggo Mortensen, Colin Farrell and Joel Egerton taking on the leading roles of real-life divers Rick Stanton, John Volanthen and Harry Harris, a lot of what viewers see on screen is real.

The actors and director Ron Howard spoke about their experiences making the film in a press conference, including the drama’s diving sequences.

Did the Stars Really Dive in the Movie?

The short answer is yes—the cast really did learn how to dive for Thirteen Lives and they did so for great lengths of time in a set that was purpose-built for the film and designed to look like the real Tham Luang cave system.

Howard recreated the cave by visiting the real one with Stanton, Volanthen and fellow diver Jason Mallinson (played by Paul Gleeson in the film), and the divers explained to the filmmaker which points in the cave were particularly difficult for them to traverse. These were the parts Howard had remade on the set, which was then flooded so the actors could dive through it.

When asked if they had ever panicked while underwater, Egerton said of his experience diving: “I did have one moment because, you know, not only were we going, I was a relatively novice diver, well completely novice, getting through these stages… [it’s] thanks to Rick and Jason and all the Australian Navy guys that were assisting us getting us to get through these like incredibly tight pinch points with side-mount tanks, with a lot of equipment.

“Then, to start to understand that we would have to do the same [thing], navigating the same kind of Aspens and tight spots, carrying stuntman who were acting unconscious to replicate the rescue of the young boys and the coach, and then, beyond that, occasionally to have camera equipment attached to us so that we could get certain shots.

“And I did have one moment where I felt a little overwhelmed when I was carrying not only a stunt person and all the equipment, but having a camera mounted to my chest and all for the sake of a close-up and I found it overwhelming, and it really hit me how vital it is for everybody to be putting their safety first, to understand how rational and calm the psyche, or the the attitude, of a regular extreme cave diver would have have to be that sets them apart from us regular folk.

“Not only understand we were doing that in a controlled environment, where people could come immediately and help us and extract us, and ask us if we were okay.

“Now imagine doing that in a place where you [are a] kilometre or two or further into a cave, and you had nobody but yourself and your dive buddy to help you through any sort of moment. So yeah, it just reminded me you have to be really sharp and really look after each other.”

Mortensen added: “There were several moments for all of us, I think, where you went, ‘Oh, wow, what have I gotten myself into?'”

Explaining one such moment, the Lord of the Rings star said: “Near the shoot Rick and Jason they were trying to obviously show us how to imitate them, but first of all to be safe and one thing they kept telling me was remember to just breathe calmly, just control your breathing.

“So, for them, they’re diving for miles sometimes and you don’t want to use up all your air, the more nervous you are, the more you are nervous and your breathing is shallow, then you use up all your air. And also, there’s situations where you get snagged or something goes wrong you want to be able to think calmly, and that has to do with breathing.

“There was a lot of places that were so narrow that you had to just wiggle through, sometimes you have to take your tank and push it through, take it off while you’re underwater without disconnecting from the air, then go through this wiggle area and then put the tank on, do this all calmly.

“And we had two tanks, you know, and if something went wrong with one [they’d tell us] just be calm don’t freak out because you can drown in a few seconds. Once you freak out and you swallow a little water you’re done, and even though it’s a movie and you’re in this place nobody can get to you fast enough, and so forth.

“And by going to these places, there’s valves, right and I rolled on one of my tanks as I was trying to squeeze through this pinch point and it just shut off.

“I was like, ‘f**k no air,’ and I said, ‘okay, remember what Rick said,’ excuse my language. I remember what Rick said and I was like, ‘Okay, I have the other tank’ so just tried to get over here and reach it and switch to the other mouthpiece, do it calmly. It seemed like it took forever but it probably didn’t take that long, but I got it done and then I managed to get through this tight spot.

“But I really had a moment there where I started to breathe fast. So that happened but I think it happened to the other guys too, things like that. All your equipment, sometimes they will get snagged on this stuff like tight bends and so forth.”

Did the Cast Meet the People They Were Playing?

The actors were able to meet with their real-life counterparts while preparing for the film, they were on hand to give advice to the cast and, in fact, Stanton and Mallinson were even on the set.

Farrell said: “I have to give credit as well as the other actors did me personally to John Volanthen, and how much time John gave to me and FaceTimes as well, you know, because when we went over to shoot in Australia it was in the middle of the pandemic.

“We were all quarantined for the first two weeks in our hotel rooms and that was a time for us to all get on and have conversations about the script, and talk to the divers that we were playing and read up on this event as it unfolded some years [ago].

“But, yeah, the technical aspect of it really was quite nerve-wracking and there was a certain degree of comfort over time that we got, because, obviously, familiarity breeds comfort, but we really were newbies, and we were all just incredibly attentive because, again, because of the importance and the beauty of the story, we’re telling them because we knew like you’re never going to become a master at anything doing what we do.

“What you want to do is have some kind of touchstones, some reference points, and and yeah, we just leaned into [it]. Rick Stanton was there every day on the set, and he was an enormous help, and Jason Mallinson as well.

“I mean, the two lads being there on the set, just for my comfort levels, personally, and also constantly going to them as reference, like, ‘what did you think here? Do you remember when that happens? Who went first? What took place then?’

“There was all sorts of personal and psychological questions that they gave themselves to us that we could ask of them, which was just, for me, it was hugely important and incredibly beneficial to bring the story to life. So [I’m] super grateful.”

Thirteen Lives is out on Prime Video now.

“Thirteen Lives” director Ron Howard with the film’s cast. Howard had a set purpose-built to recreate the caves that Rick Stanton, John Volanthen, Harry Harris and other divers went through to save 12 boys and their football coach who were stuck in the cave.Vince Valitutti/Metro-Goldwyn-Mayer Pictures Inc. All Rights Reserved Russia Cracks Down on War Critics As Official Jailed...

Woman gets 6 years in prison after plane forced...

Casey White charged with killing official who helped him...

Bitcoin (BTC) Is Off to Worst Annual Start Since...

Tucker Carlson: Everything that Tulsi Gabbard said about biolabs...

Afghanistan women ordered by Taliban to cover up head-to-toe...

Euro 2022: Why Wendie Renard playing in Rotherham is...

House to vote on stopgap bill to avert shutdown

Indiana doctor moves toward suing AG who threatened to...

Tucker Carlson: Democrats have figured out the only way...

London Calling: A look at the Falklands War nearly...

Crypto Companies Are Turning to Bermuda as US Eyes...