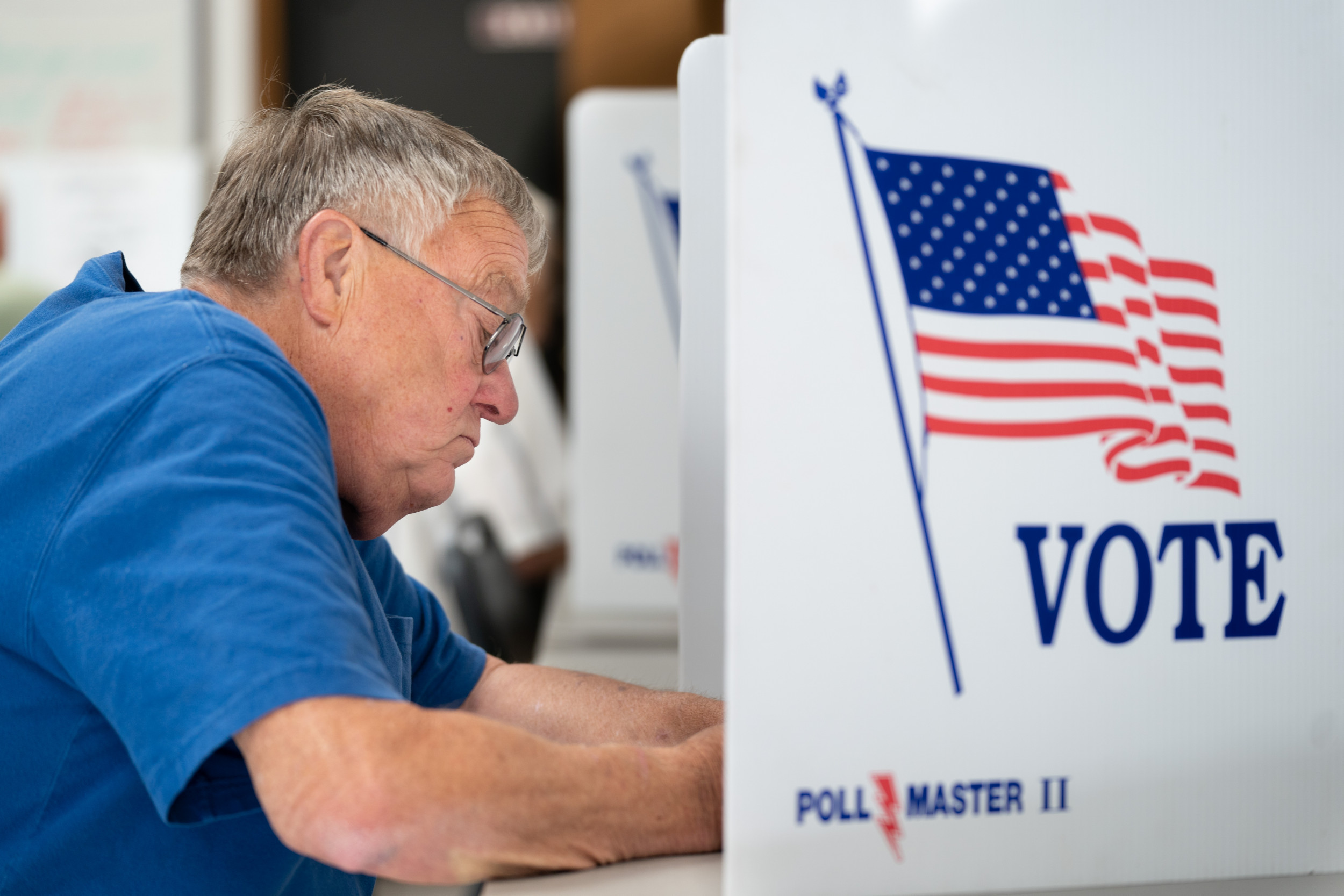 The Democrats are trying to beat the Republicans at their own game this midterm cycle, meddling in a number of GOP primaries with the hope that it’ll improve their odds in November. But the strategy has required the party to spend tens of millions of dollars boosting election deniers, and if it backfires, the Democrats will have to shoulder some of the blame for helping those far-right candidates into office.

Democrats have spent at least $43,885,000 on advertising campaigns in races across six states. While the tactic has struggled to see success in congressional races, their efforts to highlight candidates who they believe will be easier to defeat in the general election finally paid off this week after Michigan Representative Peter Meijer was ousted by John Gibbs, who was endorsed by former President Donald Trump.

Meijer, one of 10 House Republicans who voted to impeach Trump, would have been a more formidable opponent for the Democratic Party in the general election. So, the Democratic Congressional Campaign Committee (DCCC) spent $435,000 on ads promoting his primary opponent to Republican voters as a candidate “handpicked by Trump to run for Congress.”

On Tuesday, Gibbs, who has repeatedly pushed Trump’s claims that the 2020 election was “stolen,” won the Republican nomination for Meijer’s district. He will face Democratic nominee Hillary Scholten in November.

Democrats have spent at least $43,885,000 on advertising campaigns boosting far-right GOP candidates to Republican primary voters. A man fills out a ballot at a voting booth on May 17, 2022, in Mount Gilead, North Carolina. Sean Rayford/Stringer

While the political trick is not new, experts warn that embracing it at a time when the American people are facing the “fundamental issue” of growing distrust in government and the electoral process, has dangerous ramifications.

“This choice by the DCCC to put a huge amount of money into supporting far-right candidates who support the conspiracy theories about a fraudulent election, is another egregious attack on people’s trust in our government,” Carolyn Lukensmeyer, the founding executive director of the National Institute for Civil Discourse, told Newsweek.

It’s a risky move for the Democrats to boost these candidates, yet the DCCC, the Democratic Governors Association (DGA) and the House Majority PAC have run TV spots for a handful of election deniers.

Robert Lieberman, author of Four Threats: The Recurring Crises of American Democracy and political scientist at Johns Hopkins University, said it’s “really risky” when political elites act as if winning is the most important thing.

“If they’re willing to throw those things out in order to win elections, then that spells trouble,” he told Newsweek.

Lieberman said Republicans have, for some time, been using more drastic measures to declare victory, which culminated in Trump’s election fraud claims and the January 6 Capitol riot. But, he added, “when the other party starts to play along,” it could lead American democracy on a downward spiral.

While Lieberman said he understands the temptation for Democrats to play “tit-for-tat” hardball, he called it an “extremely cynical and questionable strategy.”

Partisanship has become the core of most Americans’ political identity, so more people are willing to tolerate these tactics when it’s their party that’s behaving in that way. Yet, experts still say it’s a hypocritical move from a party that has touted themselves as upholding the rules and norms of democracy. They say that using strategies designed to win at any cost reduces the Democrats’ long-held claim to America’s moral high ground.

On Tuesday, Representative Peter Meijer lost his GOP primary against John Gibbs, a Trump-backed candidate who says the 2020 election was fraudulent. Meijer speaks during a meeting with House Republicans on August 30, 2021, in Washington, D.C.Drew Angerer/Getty Images

Ahead of Tuesday’s primary, Meijer slammed the political trick, telling Politico that he’s “sick and tired of hearing the sanctimonious bulls–t about the Democrats being the pro-democracy party.”

In an essay posted online, the freshman congressman said that if the Democrats are successful at ousting him, “Republican voters will be blamed” but that ultimately, “there is no doubt Democrats’ fingerprints will be on the weapon.”

Speaking to CNN on Wednesday, Representative Adam Kinzinger, who voted with Meijer on impeachment, said the “DCCC needs to be ashamed of themselves” for setting up Gibbs’ primary win.

“Don’t keep coming to me, asking where are all the good Republicans that defend democracy, and then take your donors’ money and spend half a million dollars promoting one of the worst election deniers that’s out there,” Kinzinger said. “If Peter’s opponent wins, the Democrats own that.”

And it’s not only Republicans who have called out the DCCC for trying to boost extreme GOP candidates. A number of congressional Democrats have also publicly criticized the move, calling the use of campaign funds to help election deniers “unconscionable” and an “egregious misuse of Democratic resources.”

Doug Mastriano won the GOP gubernatorial primary after his Democratic opponent boosted him over his more moderate Republican rival. Above, supporters attend Mastriano’s election-night party at The Orchards on May 17, 2022, in Chambersburg, Pennsylvania. Michael M. Santiago/Getty Images

Michael Berkman, director of the McCourtney Institute of Democracy at Penn State, said these strategies, when used in races like Meijer’s, won’t have major impacts on American democracy, given that a single Republican legislator who breaks from their party will likely be marginalized.

But when these tactics are being applied to gubernatorial and Senate elections, like in Pennsylvania’s governor’s race, where Democrat Josh Shapiro dropped $840,000 on ads drawing attention to his GOP rival Doug Mastriano, Berkman said it becomes more problematic if the move backfires.

“If you miscalculate and you get a very extreme Republican governor, it can be extremely destructive to democracy at the state level,” Lieberman agreed. “There are states, like Wisconsin or Michigan, where Democratic governors are the last stand against the very extreme electoral manipulation that Republicans in the state legislatures are trying to pass.”

Lieberman said it would be “fatuous” for Democrats to deflect accusations that they are helping far-right election deniers and argue that they’re merely highlighting the platforms on which those candidates are running.

“For the Democrats to hide behind this, and say they’re not helping these extreme candidates, I think is transparently nonsensical,” he said.

Newsweek has reached out to the DCCC for comment.

The high-tech fitness mirrors that aim to get you...

Shionogi’s Covid-19 Pill Ready to Move to Next Trial...

They were Covid-19 success stories — then they saw...

Ransomware attacks are on the rise, so make sure...

Man to stand trial over body-in-bag murder in Renfrew

Modern tech allows salad to be grown in winter...

POLITICO Playbook: Biden faces his moment on the filibuster

White Democrats ‘not listening’ to Black Americans, ‘have become...

Man charged in connection with doorstep death in Bellshill

In freezing Afghanistan, aid workers rush to save millions

Teachers unions hit the Hill ahead of gun safety...

Bitcoin’s new puzzle: How to ditch fossil fuels and...

Covid: South Africa makes its own version of Moderna...

Wimbledon: Novak Djokovic needed to ‘weather the storm’ after...

Biden ‘does not care’ about small-town America, South Dakotans...

Motorcyclist dies after crash with car in Highlands

Did Viggo Mortensen and the 'Thirteen Lives' Cast Really Dive in the...