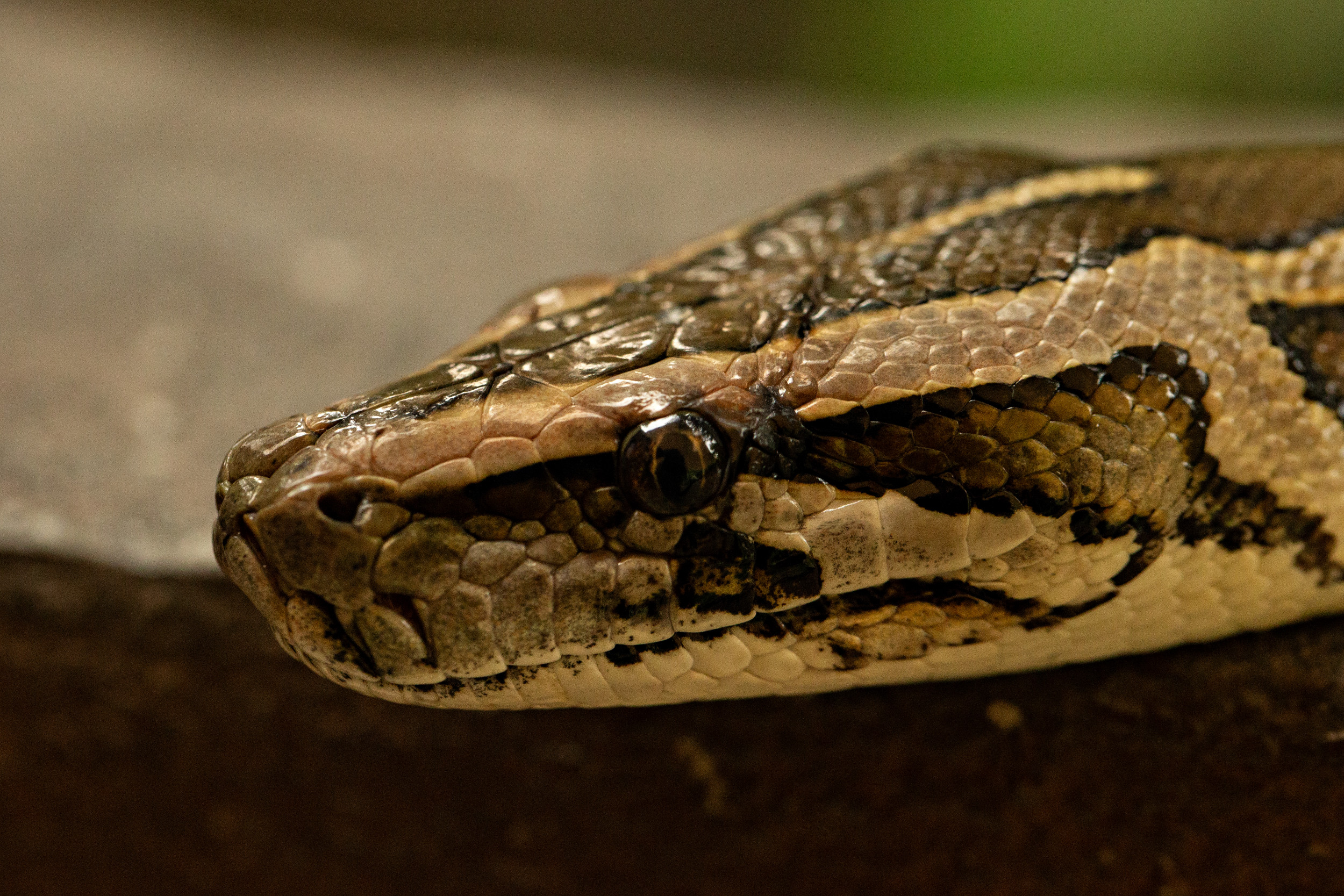 A near 18-foot, 100-pound Burmese python has been captured slithering across a highway in Florida.

The enormous snake was caught by three amateur hunters in Collier County and may be one of the biggest ever found in the state, Wink News reported.

Jake Waleri, Joshua Laquis and Stephen Gauta had been hunting for Burmese pythons when they unexpectedly came across the huge snake.

They had been driving along the US-41 near Monroe Station when they spotted it on the road.

A stock photo shows a close-up of a Burmese python. The species is invasive to Florida.tomava

“I look up, and I see something blocking the entire road. It takes me a second and I just see a head move, and I just start screaming,” Waleri told Wink News.

Waleri said that he and his companions did not expect to find anything as large.

“We were sweating and fighting this thing for a good five to 10 minutes,” Gauta told the news outlet.

Once they managed to catch the beast, they measured it and discovered it was 17 feet 10 inches long.

The snake is not a record breaker, however, it is very close. In June, a team of python trackers from the Conservancy of Southwest Florida caught the python that holds the record, which measured 18 feet.

“When I saw this thing, and I saw its tail and its head were almost touching the opposite white lines of the road, I was shocked. I was like, this could be a record breaker. It’s not but it’s pretty close,” Waleri told Wink News.

It is not the first time the hunters have tackled a huge snake, Gauta having recently caught one that measured 17 feet and 6 inches.

Burmese pythons are an invasive species in Florida. They were first introduced to the environment in the 1970s—likely as exotic pets released into the wild. Ever since, they have been severely impacting the native ecosystem as they feast on native wildlife, such as white tailed deer, causing a major issue in preserving the wetlands.

The species can grow to huge sizes. On average they reach 10 to 16 feet, however, some grow much larger.

They also reproduce rapidly and the population in the state has boomed in recent years. For this reason, hunting the species is encouraged.

Particularly large, female snakes are highly sought after, as their capture prevents the species from breeding.

“These pythons don’t have a lot of natural predators, so it’s up to us to be those natural predators, take them out of the glades before they get this big and can consume everything. This thing must have been really destructive over the last two decades,” Waleri told Wink News.

“To go out there and remove some of these invasive species to make sure your native wildlife has a chance, it feels really good,” Gauta said.

The 2022 Florida Python Challenge is about to begin. The hunt, which takes place annually, is arranged by the Florida Fish and Wildlife Conservation Commission and aims to remove as many snakes as possible from the ecosystem.

Newsweek has contacted the amateur hunters for a comment. Meet the first Mexican-born woman to go to space

Throwback: The Return Of The Liberal Jedi

iPhone at 15: looking back at the original and...

Why are black Americans being punished for their hair?

Mideast nations wake up to damage from climate change

No reported damage in Philippines from Chinese rocket debris

Jackson Fends Off GOP Attacks on Crime and Race...

New research shows how color could help stave off...

Morbius is being slammed as the worst Marvel movie...

‘Bell-ringing is more than a call to prayer’

Logan Mwangi: Murder-accused, 14, was ‘a monster’