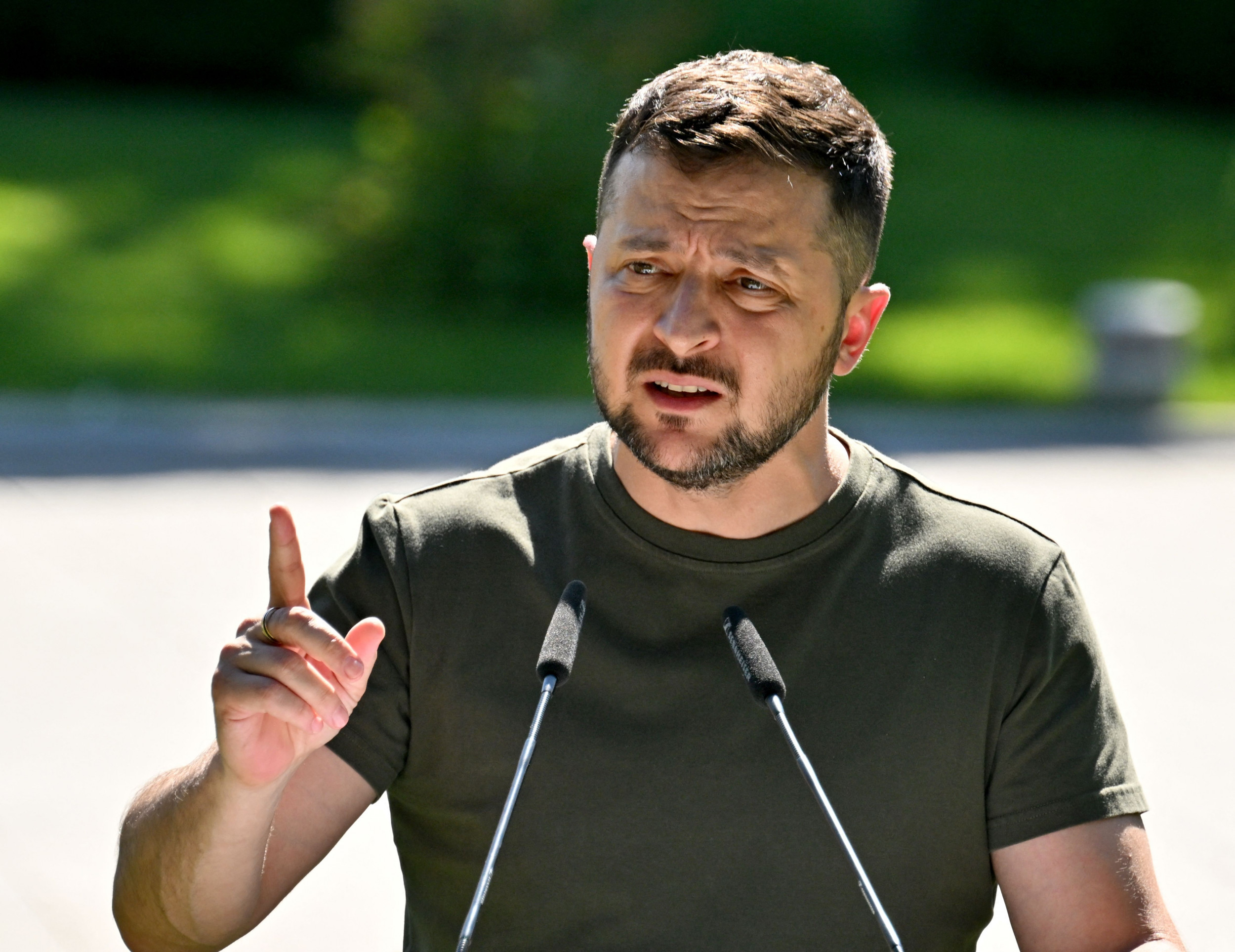 Ukrainian President Volodymyr Zelenskysavaged an Amnesty International report that accused his forces of endangering civilians by deliberately setting up bases in residential areas.

During his nightly video address to the Ukrainian people on Thursday, he accused Amnesty International of seeking to “shift responsibility from the aggressor to the victim.”

The president added: “There cannot be, even hypothetically, any condition under which any Russian attack on Ukraine becomes justified. Aggression against our state is unprovoked, invasive and openly terroristic.”

“And if someone makes a report in which the victim and the aggressor are allegedly the same in something, if some data about the victim is analyzed and what the aggressor was doing at that time is ignored, this cannot be tolerated.”

Ukrainian President Volodymyr Zelensky delivers a statement during a joint press conference with Lithuanian President Gitanas Nauseda following their meeting in Kyiv on July 28, 2022. He savaged an Amnesty International report that accused his forces of endangering civilians by deliberately setting up bases in residential areas.SERGEI SUPINSKY/AFP/GETTY

The Amnesty report, titled “Ukraine: Ukrainian fighting tactics endanger civilians,” was released on Thursday. It accused the Ukrainian military of having “put civilians in harm’s way,” while resisting the Russian invasion “by establishing bases and operating weapons systems in populated residential areas.”

Researchers found evidence that Ukrainian forces had been “basing themselves in civilian buildings” across 19 towns and villages.

Fighting in Ukraine has been characterized by fierce urban combat, with Russian forces leveling large parts of cities such as Mariupol and Severodonetsk before they were captured.

She commented: “We have documented a pattern of Ukrainian forces putting civilians at risk and violating the laws of war when they operate in populated areas.

“Being in a defensive position does not exempt the Ukrainian military from respecting international humanitarian law.”

In an extraordinary move, the report was rejected by Ukrainian Amnesty International employees, who said they had opposed publication.

In a statement they said: “The Ukrainian office was not involved in the preparation or writing of the text of the publication.

“Representatives of the Ukrainian office did everything they could to prevent this material from being made public. We are very sorry that even after all possible arguments ‘against’ we were still not heard.”

The report sparked a furious backlash, with Garry Kasparov, the Russian chess player and anti-Putin dissident, telling them to “go to hell.”

He tweeted: “Pathetic. Amnesty International can go to hell for this garbage. Or go to Ukraine, which Putin’s war is trying to turn into hell. As with their actions on Navalny, it reeks of Russian influence turning Kremlin propaganda into Amnesty statements.”

Maxim Tucker, a former Amnesty employee who now works for the Times of London, branded the report “both bizarre and misleading.”

Amnesty has previously described the Russian invasion of Ukraine as “an act of aggression that has unleashed the gravest human rights and refugee crisis in Europe since World War Two”.

It accused Russian forces of “the unlawful killing and injury of civilians, destruction of infrastructure, and blocking of desperately needed aid for civilians.”

After Russian troops were forced out of Bucha, north of Kiev, 403 bodies were recovered, according to Mayor Anatoliy Fedoruk, some allegedly bearing signs of torture.

According to the Ukrainian defense ministry, at least nine women in the town became pregnant after being raped by Russian troops.

President Putin claimed the images were “fake,” during a press conference held after the bodies were discovered in April. Opinion: How we can fight the stigma around monkeypox and provide better health care

Ukraine war: The Syrians signing up to fight for...

runDisney Runners Who Inspire Us: Runner’s Exciting Finish During...

Texan sentenced to 25 years for virus-era attack on...

‘I am not a murderer,’ Paris attacks defendant maintains

Ford Halts Sales of Mustang Mach-E in Setback for...

Wives of Mariupol defenders to pope: ‘You are our...

Witnessing the war in Ukraine

Lotto winner who gave away half of £115m fortune...

Greece Takes Its Drive to Boost LGBTQ Rights up...

IMF reaches deal with Pakistan to revive $6B bailout