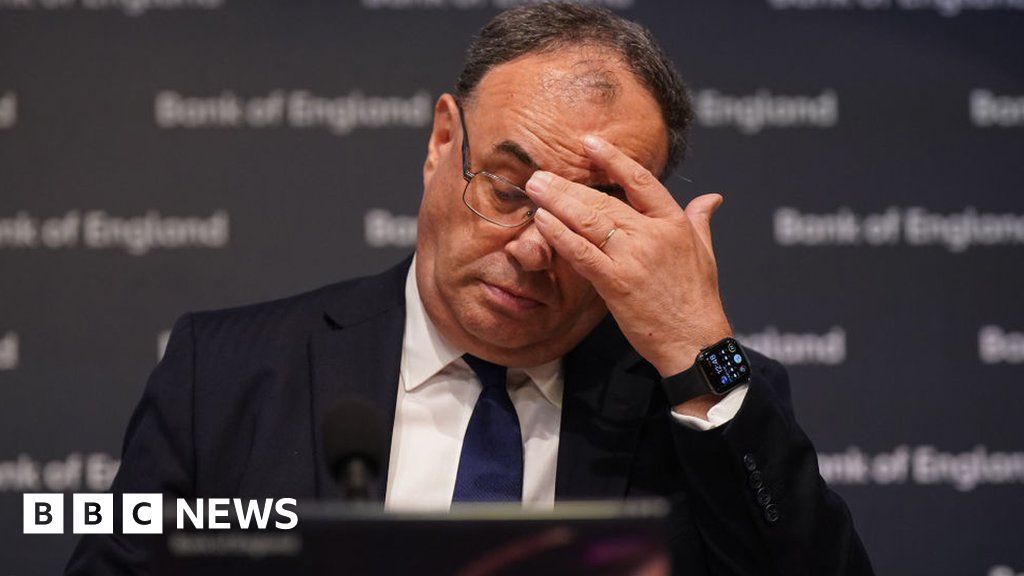 Media caption, In a ‘blunt message” the Bank of England governor warns interest rates may have to rise even higher

The governor of the Bank of England has defended its decision to raise interest rates, saying there is a “real risk” of soaring prices becoming “embedded”.

The UK is forecast to fall into recession this year, with the longest downturn since 2008 predicted.

Increasing interest rates is one way to try and control inflation as it raises borrowing costs.

However, many households will be squeezed further following the interest rate rise, including some mortgage-holders.

The Bank’s governor, Andrew Bailey, told BBC Radio 4’s Today programme: “The real risk we’re responding to is that inflation becomes embedded and it doesn’t come down in the way that we would otherwise expect.”

“We’ve had a domestic shock, we’ve had a shrinkage in the labour force over the last two years or so,” he said.

“The first thing that businesses want to talk to me about is the problems they’re having hiring people… They’re also saying to us, actually they’re not finding it difficult to raise prices at the moment. Now we think that can’t go on.”

UK inflation – the rate at which prices rise – is currently at 9.4% – the highest level for more than 40 years.

But the Bank has warned it could peak at more than 13% and stay at “very elevated levels” throughout much of next year, before eventually returning to the Bank’s 2% target the following year.

The main reason for high inflation and low growth is soaring energy bills, driven by Russia’s invasion of Ukraine.

Households have also been hit by higher petrol, diesel and food costs.

Have you experienced recession before? How did your life change? Please email: [email protected]

Please include a contact number if you are willing to speak to a BBC journalist. You can also get in touch via WhatsApp: +44 7756 165803 and Twitter: @BBC_HaveYourSay

The economy is forecast to shrink in the final three months of this year and keep shrinking until the end of 2023.

The expected recession would be the longest downturn since 2008, when the UK banking system faced collapse, bringing lending to a halt.

The slump is not set to be as deep as 14 years ago but may last just as long.

Paul Johnson, director of the independent Institute for Fiscal Studies, said the economic situation would mean there would have to be “many more billions to support households” and more money for public services.

He told the BBC that the Tory leadership candidates should be focused on tackling inflation, rather than tax cuts.

Mr Johnson rejected the idea that tax cuts could be funded in part by “fiscal headroom”.

“What [the leadership candidates are] talking about is that the Office for Budget Responsibility [in March] said we’d be borrowing about £30bn less than we absolutely could to meet the fiscal target of a balanced current budget in a few years’ time,” he said.

But he added that this was “highly uncertain” and now “massively out of date”, given the economy was going into recession.

Labour’s Johnathan Ashworth said the cost of living support measures announced by the government so far was “clearly not enough”.

“There will be families and pensioners across the country waking up this morning, reading the news, who are absolutely terrified because a juggernaut is heading [their] way which will smash through family finances,” the shadow work and pensions secretary told the BBC.

He said a Labour government would reduce VAT on energy bills, abolish the tax relief currently offered to oil and gas companies who invest, and provide support to help people retrofit their homes to make them more energy efficient.

Now rates have gone up to 1.75%, homeowners on a typical tracker mortgage will have to pay about £52 more a month. Those on standard variable rate mortgages will see a £59 increase.

It means tracker mortgage holders could be paying about £167 more a month compared with pre-December 2021, with variable mortgage holders paying up to £132 more. Interest rates have risen six times in a row since the end of last year. Sri Lanka’s parliament will not convene on Friday -speaker’s...

EXPLAINER: What to watch at Kim Potter’s sentencing hearing

iPhone 14 Pro Max could be a downgrade in...

Where is the new Scream 5 movie streaming?

Is Nintendo Switch 4K? An overview of resolution on...

Italy’s Draghi brushes off concerns his coalition could fold

The Uplift: A bounty of books and a birthday...

Amazon to buy primary health care provider for $3.9B

Elon Musk is a wild card who could make...

Adobe wants to tackle the scourge of misleading online...

Poland to end state of emergency along border with...

Ukrainian defenders dig in as Russia lines up more...

The time to address the student mental health crisis...