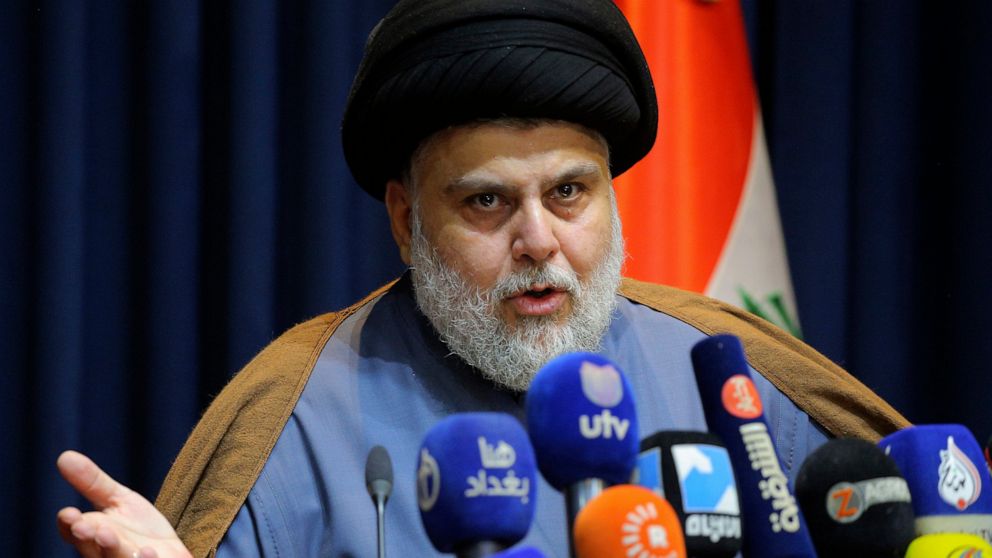 BAGHDAD — Khalil Ibrahims four sons are among thousands of followers of an influential Shiite cleric staging a sit-in outside Iraqs parliament after storming the building last week in a stunning move that threw the country into a new era of political instability.

Ibrahim is behind them all the way, he says as are practically all his neighbors in Sadr City, the huge Baghdad district of millions of largely impoverished Shiites that is the heart of support for the cleric, Muqtada al-Sadr.

Every house within the districts concrete jungle has members participating in the sit-in, the 70-year-old Ibrahim told The Associated Press on Thursday. This time we know there will be change, we are sure of it, he said.

Al-Sadr derives his political weight largely from their seemingly unending support. Word from the cleric has spurred meticulously organized mass protests at various times in the past, bringing Baghdad to a halt and disrupting the political process. Many in Sadr City proclaim their devotion to the cleric, dismissing allegations of corruption against his movement.

They are drawn by his religious rhetoric and the promise of long-sought change and recognition for a community that is among Iraqs most destitute.

Most in Sadr City complain of inadequate basic services, including electricity in the scorching summer heat temperatures soared above 50 degrees Celsius (122 degrees Fahrenheit) Thursday. The majority who spoke to the AP did not complete schooling, and those who did say they cant find work.

Prompted by protest calls by al-Sadr’s party, they overran parliament on Saturday, before pulling back to the sit-in outside the building. Their gathering is preventing al-Sadrs Iranian-backed political rivals from forging ahead with government formation. Al-Sadr, whose party won the largest number of seats in the most recent election, had been demanding a majority government that would have squeezed out those rivals.

The standoff extends an unprecedented political impasse 10 months since federal elections were held.

The cleric calls his followers to action by eliciting a powerful combination of religion, in particular by evoking the sacrifices of Imam Hussein, a revered figure in Shiite Islam. He also taps into Sadr Citys long history as an epicenter of mass social demonstration where sentiments of oppression and revolution run deep.

This history dates back to the districts founding soon after the 1958 overthrow of the monarchy by Abdel Karim Qassim.

Called Revolution City back then, Qassim built settlements for migrants from southern Iraq, many of whom were violently dispossessed of land and suffered immense poverty. Its five original sectors would grow over the following decades to 100 sectors with 2.5 million residents.

With successive regime changes, the area fell into neglect and created an urban underclass segregated from the rest of Baghdad society. Under Saddam Hussein, the area became a center for Shiite resistance. After the U.S.-led invasion in 2003, it was renamed Sadr City after al-Sadrs father.

In a speech Wednesday, al-Sadr instructed his followers to carry on with the sit-in and called for early elections, the dissolution of parliament and amendments to the constitution.

In the Ibrahim household, the demands are simpler. They want to own a house and find work. Ibrahims sons only have irregular day laborer jobs. Ibrahims oldest son is 23, and none of his children went past primary school.

All of them, 12 persons total, live in a house where the rent takes up most their incomes. This despite Ibrahim having worked his entire life as a guard outside the Education Ministry.

Hamida, Ibrahims wife, desperately wants to own a house of their own.

Just then, the electricity cut out. There it goes again, she sighed.

Al-Sadrs support, which extends to parts of southern Iraq, has shown signs of eroding. Though the party was the biggest vote-getter in Octobers elections, its total votes were under a million, less than previous elections.

The party has been part of multiple governments over the years, yet Sadr City has seen little improvement. Despite his portrayal as a hero the dispossessed, his party has a vast network of civil servant appointees across Iraqs state institutions ready to do its bidding. Contractors doing business with the ministries under his control have complained of harassment and threats from his party members.

Critics accuse the cleric of using his followers as pawns by evoking the legacy of his father, Mohamed Sadeq al-Sadr a highly respected Shiite religious figure killed by Saddams regime in the 1990s.

In Sadr City, his supporters are quick to defend him, saying opponents in power have obstructed his agenda.

Many said his calls to protest gave them purpose beyond the monotony of their poverty-stricken lives. The protest call is disseminated from Sadrs party offices down to tribal leaders, who pass it on to their members.

Many protesters who stormed parliament Saturday said it was their first glimpse of the halls of power, where they are seldom welcome.

I saw the big buildings, the beautiful rooms, and I thought How can this exist in the same city where I am struggling? said Mohammed Alaa, a grocer in Sadr City. Arent we human also?

Portraits of Imam Hussein, the Prophet Mohammeds grandson, hang outside almost every door in Sadr City. Ashura, next Monday, commemorates his killing, and Iraqis typically march in the thousands to mark the day in the holy city of Karbala.

Al-Sadrs messaging is suffused with references to Husseins sacrifice and calls to rise up against oppression. In Saturdays speech al-Sadr said he was against bloodshed, but reform comes only through sacrifice pointing to the example of the imam.

The comparison resonates among his followers. A portrait of Imam Hussein glitters in Ibrahims modest living room.

Imam Hussein called for reform and revolution, and now our leaders are also, Ibrahim said. Of course, some can ignore that, but we cant.

Mark Meadows: Joe Biden has been turned into a...

A year without Cuomo

Construction along Hollywood Walk of Fame set for 2023

Sony’s eccentric new LinkBuds will launch in the UAE...

Can Omicron Escape Vaccines and Boosters?

Sean Hannity: This is the third increase from the...

Ellen Pompeo cutting back on her ‘Grey’s Anatomy’ episodes

Shanghai to allow parents to stay with COVID-infected kids

Greg Gutfeld: Celebrate the people who work to keep...

The book that sank on the Titanic and burned...

It’s now easier than ever for hackers to abuse...